Scientists: Diseases such as tuberculosis are not today`s inventions 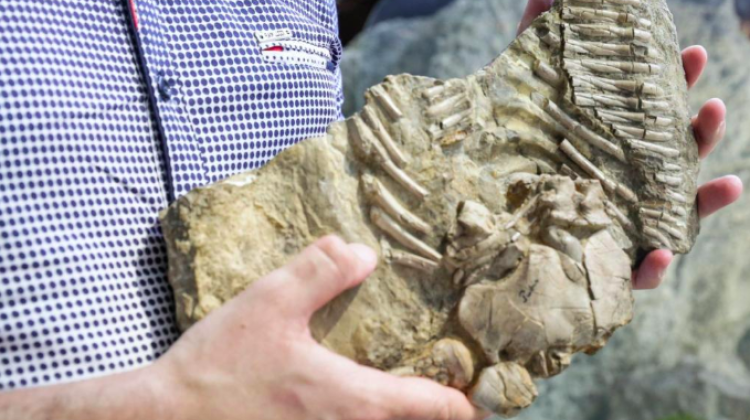 The case of a prehistoric reptile with traces of tuberculosis is an example of ancient natural history of dangerous infectious diseases and evidence that such diseases are not the invention of today`s societies, say Polish discoverers of the oldest known case of tuberculosis.

The discovery concerns the remains of the Proneusticosaurus silesiacus - an animal that lived 245 million years ago, was about a meter long, probably preyed on fish, and in appearance resembled a crocodile and a lizard. The skeleton of the reptile was found at the turn of the 20th century in Gogolin and for years it remained in the collection of the Geological Museum of the University of Wrocław (parts of it were lost during the war). Scientists examined it many times, but no one noticed strange, nodular growths that covered at least four adjacent ribs.

The fact that the animal had tuberculosis was recently proven by scientists from Poland and the United States. The results of their research were published in the journal Royal Society Open Science. Polish journalists told reporters about the research at a press meeting in Katowice.

"These tiny nodules indicate a pathology - this is not a normal bone structure. Something happened and we decided to investigate what it might have been. Even the specimens found over 120 years ago can still be an interesting source of information thanks to a new perspective and new analytical methods that we now have" - said palaeontologist Dawid Surmik from the Faculty of Earth Sciences at the University of Silesia in Katowice, who analysed the specimen as part of his (already completed) research project concerning Triassic marine reptiles. Surmik was attentive to the presence of skeletal pathologies, because he simultaneously studied the bones of other marine reptiles - pistosaurs, bearing traces of joint infections.

"It is certainly the oldest case of diagnosed tuberculosis. We do not know exactly how these animals hunted, but this disease could affect its performance in the natural environment, making it difficult to dive. The animal coughed, infecting others. It lived like that for several seasons, so it managed to survive somehow for some time. We are unable to determine the cause of death, especially that it is an incomplete skeleton. There are no traces of predation, at least on the preserved part, so the cause of death could be tuberculosis, or maybe old age" - said Tomasz Szczygielski from the Institute of Paleobiology of the Polish Academy of Sciences in Warsaw.

Co-authors of the discovery are Dr. Katarzyna Janiszewska from the Institute of Paleobiology PAS and Prof. Bruce Rothschild from the Carnegie Museum in Pittsburgh in the United States.

According to Prof. Rothschild, the discovery opens a new window, allowing to better understand what affects the survival of animals, what determines their extinction, to learn how diseases start and spread.

Prof. Rothschild emphasised that the discovery was possible thanks to interdisciplinary cooperation of scientists representing various fields of science - palaeontology, biology, medicine.

Tuberculosis is very common in the animal world, and among the terrestrial and aquatic forms it mainly affects pinnipeds, including seals. Pinnipeds are the closest counterparts of the extinct primitive marine reptiles, such as notosaurs, to which the Proneusticosaurus was related. This allows to suspect that the mechanism of pathogen transmission in these animals could be similar.

The researchers also point out that the case of the Proneusticosaurus is a great example of the ancient natural history of dangerous infectious diseases and a proof that these diseases are not the invention of today`s societies.

Tuberculosis is considered one of the oldest and most dangerous infectious diseases. It has accompanied humanity for thousands of years, and previous evidence from the fossil record indicates that it has been afflicting animals for 17 thousand years. The research of the Polish-American team led by Dawid Surmik proves that the origins of tuberculosis and its pathogen - mycobacteria - date back to deep prehistory, the beginning of the Mesozoic - the era of large reptiles.