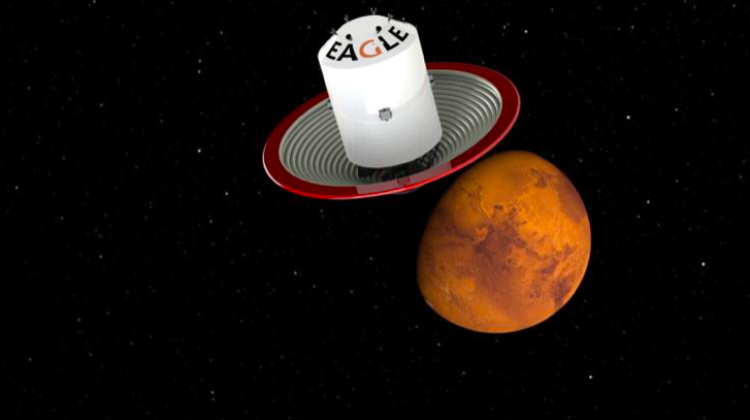 Wrocław students have taken up the challenge space agencies have been facing for years, which is a barrier to the possibility of colonising Mars. Their idea for a large Mars lander is one of the world`s top five solutions in the "Red Eagle" contest.

Now they are looking for funds for a trip to the competition finals in the United States.

The biggest problem associated with the colonization of Mars is sending all the equipment necessary for survival. The students were given the task of designing a lander that would enable delivering a minimum of 10 tons of cargo to the Red Planet. The machine should be possible to be built and sent to Mars by 2026.

The Eagle project was developed by members of the OFF-ROAD Unconventional Vehicles Science Club at Wrocław University of Science and Technology. It is the only Polish project selected for the finals of the "Red Eagle - International Student Engineering Contest to Design Mars Lander", organized by The Mars Society in cooperation with NASA. The finals will take place in August in Pasadena.

According to the group leader Justyna Pelc, the students from the OFF-Road science club have been awarded many times at the international competition of Mars rovers. This year, they tackled a more difficult challenge that has been bugging all space agencies for many years and blocking the possibility of colonising Mars and other nearby planets. The largest load humanity delivered to Mars so far was the Curiosity rover weighing about 1 ton.

The problem is braking.

"The atmosphere of Mars has much lower density than the Earth`s atmosphere, so commonly used methods such as a parachute, will not work. Another problem is that the current rockets (and rockets that are expected to be built by 2026) significantly limit the dimensions and weight of the lander. An additional difficulty is the possible return from Mars to Earth" - explains deceleration specialist Krzysztof Basiak.

The competition forced the participants to work out solutions to many problems in just a few months. The interdisciplinary team members included mechanic and electronic engineers, materials engineers as well as biologists and physicists. Due to the specific nature of the project, the support of industry specialists was also necessary. ESA, CERN and Mars Society Polska employees offered their help.

The Eagle lander had to make the best possible use of the available space on the NASA`s Space Launch System. A half-shell hull was used as a supporting structure. This allowed to obtain the required optimal strength to mass ratio. The cargo bay located in the lower central part of the lander is at the same time a freight lift, which facilitates the unloading process. The lift module can be easily replaced with a module that sustains life.

The most difficult task was finding the right braking methods for a lander with a significant weight. Krzysztof Basiak points out that with larger masses, such a low-density atmosphere completely excludes the use of braking methods such as parachutes, for example. Speed reduction using engines (as was the case with Moon landings) was also out of the question due to the need to use a large amount of rocket fuel, and hence - huge costs associated with the need to transport fuel between planets.

Wrocław students combined several deceleration methods: aerodynamic braking using the Hypersonic Inflatable Aerodynamic Decelerator (HIAD) module, and rocket engines in the final landing phase. HIAD module allows to increase the effective area of aerodynamic braking by filling a dozen rings with increasing diameter, forming a cone with gas. This technology allows to significantly reduce speed. After completing its task, the module is ejected, which allows to reduce the weight of the entire lander and finally land using engines.

Students also used innovative 3D printing for the lander electronics. Thanks to this, they significantly reduced the mass of the systems while maintaining low production costs. Printed electronics can be very thin and flexible at the same time. At the current technological level it is possible to print most of the sensors used in the space industry, including temperature, humidity, pressure, wind power, UV radiation sensors.

The students are now looking for funds to finance their participation in the competition finals in the United States. They need money for flight and accommodation. "We are looking for people and entities that would like to support us. As one of the five teams in the world and the only one from Poland, we will represent not only our university, but also the entire Polish Space Sector" - says Ania Wójcik, technical leader of the project. Information about the collection can be found on the website: www.scorpio.pwr.edu.pl