Change the face of nanoparticles and you`ll rule chemistry! 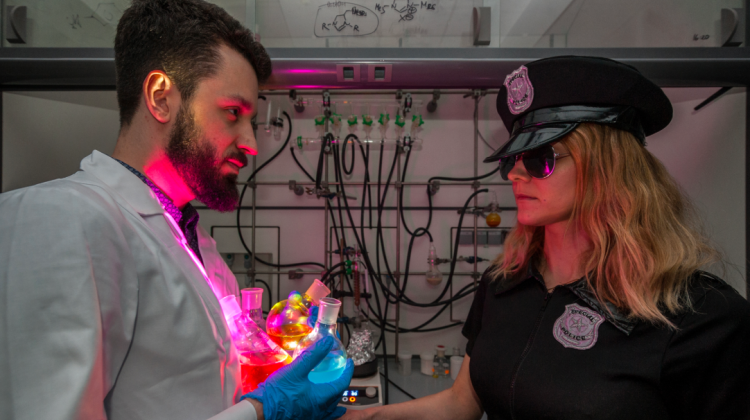 Just like a policeman controlling traffic made up of cars of different brands and types, nanoparticles coated with light-reactive catalysts can control the course of many chemical reactions simultaneously. The idea of a new method of managing the course of chemical reactions is presented by Magdalena Szewczyk and Grzegorz Sobczak, PhD students at the Institute of Physical Chemistry PAS in Warsaw. (Source: IPC PAS, Grzegorz Krzyzewski)

Depending on the lighting, the surface of appropriately crafted nanoparticles can change its topography. Researchers from the Institute of Physical Chemistry of the Polish Academy of Sciences have shown that the molecular mechanism they have designed makes it possible, by the use of light, to effectively uncover or hide catalyst molecules. The technique they present leads to qualitatively new possibilities to control the course of chemical reactions.

Using nanoparticles with surfaces that change appearance under the influence of light, it is possible to easily and precisely control the course of practically any catalytic chemical reactions, including those with many stages. A key element of the new technique, developed and demonstrated by researchers from the Institute of Physical Chemistry of the Polish Academy of Sciences (IPC PAS) in Warsaw, is the mechanism of geometric masking of active catalyst centres on the surfaces of nanoparticles. This class of new, intelligent materials made of soft and hard matter, described in the prestigious chemical journal ACS Catalysis, heralds a qualitative change in the field of industrial catalytic reactions and is an important stage in the design of chemical systems mimicking the most important features of living organisms.

A catalyst is a substance that causes a reaction between specific chemical compounds, actively participating in it and largely reverting to its original state after its completion. Nowadays, catalysts are generally designed to optimize catalysed reactions and reduce the consumption of catalyst. Attention is paid, among others, to their selectivity, that is, their ability to accelerate one, precisely chosen reaction. However, there is no great control over catalysts constructed in this manner. After introduction into the solution they usually work immediately until the reaction stops.

One of the most convenient tools that can be used to influence chemical compounds in solutions are light waves with energies suited to the properties of the particular system. Light can be easily introduced into the entire volume of the liquid, and in general it does not interfere with the course of the catalytic reactions themselves. Now, it turns out that the chemical system can be designed so that, depending on the lighting, it does or does not catalyse various chemical reactions.

The concept of light control of catalyst activity, proposed by the chemists from the IPC PAS, is most easily understood by making an analogy with sunflowers. These are plants with long, stiff stems, at the end of which there is a heavy basket with seeds. During the day, the head of the sunflower is always directed towards the light, that is, upwards – allowing it to attract insects and birds. When night falls, however, the head does not curl up like other flowers. At its base, the stem just bends, the basket falls down and the whole inflorescence ceases to be accessible.

“Our key molecular complex behaves like sunflowers, only on a molecular scale. The soil on which our ‘sunflowers’ grow is the gold nanoparticle, the stem – a long organic ligand molecule, the bending fragment – a photo-switch that changes its shape under the influence of light. The basket is the catalyst itself. The only difference is that our ‘sunflowers’ are a little bit... shy: they hide their catalytic heads when it becomes bright around them and they raise them when it is dark,” explains Dr Volodymyr Sashuk (IPC PAS).

In recent years, scientists from the IPC PAS have not only developed the concept of an innovative method of controlling catalysis, but also tested it in practice, building a real, model chemical system. It was constructed using gold nanoparticles with dimensions of three nanometres and one of the simplest catalysts: an amino acid called proline. The method itself, however, does not impose any specific restrictions, so potentially any other catalyst can be used, functionally transforming it into a variant whose activity is controlled by means of light.

“The production of nanoparticles coated with ligands with attached catalyst particles is not particularly difficult, it does, however, require some care and attention. For example, the proportions between the number of ligands with a catalyst molecule and the number of ligands without it are important. If there are too many empty ligands, the catalyst molecules will have nowhere to physically hide, and we can forget about control,” says PhD student Magdalena Szewczyk (IPC PAS).

Light-controlled nanoparticles catalysing chemical reactions promise a new phase in the development of catalysis. Thus far, the catalytic reactions have been typically carried out in one solution containing the necessary substrates and a single catalyst. Now, new opportunities are emerging. Potentially, the same solution may contain substrates for multistage catalytic reactions and a range of catalysts, each activated with light at appropriate times. As a result, several component reactions producing the chemicals necessary at later stages of a technological process, at which the new reaction would be triggered after the previous reactions were stopped, could take place in one vessel at a time. But these are not the only advantages of the new solution.

“Until now, after the reaction chemists were left with a solution containing both the product and the catalyst. Removal of the latter was often associated with the need to develop additional technological steps. In our method, the catalyst is deposited on nanoparticles. Potentially, these particles can be adjusted so that they react, for example, to a magnetic field. After completing the reaction, it would be sufficient to attract the nanoparticles to the bottom of the vessel, where they could be easily separated from the product itself,” notes PhD student Grzegorz Sobczak (IPC PAS).

The future of multistage, precisely light-controlled catalysis promises to be interesting. The new generation multi-component mixtures could, for example, harden only on the user`s demand, so it would be possible to fill all sorts of moulds, even very complex shapes, more accurately. A popular solution will probably be convenient multi-component polymer adhesives, immediately delivered in a mixed, ready to spread form. These are just some of the ideas being considered today. Researchers from the IPC PAS are still looking for ideas on how their concept could translate into specific applications.