Biologist: Muscle soreness is painful but stimulates the muscle 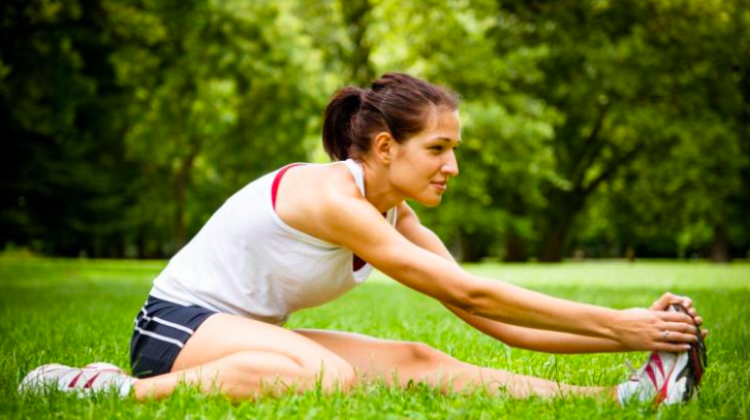 Muscle soreness is usually a good sign - despite the fact that it is perceived as pain 24-72 hours after intense exercise, it stimulates the increase of strength and volume of the affected muscle, says biologist Anita Helińska.

Fitness trainer Anita Helińska, PhD student at the Faculty of Biology of the University of Warsaw talks about what training should look like, what happens in the muscles during and after exercise, and when we burn fat during exercise.

"Each training session is a stress to which our body has to adapt, which is why there are a number of physiological changes in the athlete`s body during the exercise" - says Anita Helińska.

She explains that movement during physical exercise is enabled by skeletal striated muscles. Up close, this muscle looks like a thick wire surrounded with insulation - membranes that contain more wires - bundles of muscle fibres. "Single muscle fibre consists of even thinner wires - myofibrils. Myofibrils are composed of two main contractile proteins - actin and myosin. The interactions between these proteins allow muscles to contract during exercise, enabling us to lift weights, perform a long jump or sprint" - she says.

MUSCLE SORENESS - SUFFERING THAT PAYS OFF

"According to previous theories, the cause of muscle soreness was excessive accumulation of lactic acid in the muscles. Now we known that this is a myth" - the researcher says. She explains that while lactic acid indeed accumulates in the muscles during training, it is quickly removed from them. Only 1-2 hours after the exercise, lactic acid in the form of lactate goes to the liver and is converted into glucose and than into ATP - the fuel for our body.

Researchers discovered that very strenuous exercises cause high stresses in the exercised muscles, which may result in ruptured connections between actin and myosin or ruptured membranes that surround the muscle fibres.

"We describe such post-workout damage as microtearing of muscle fibres" - notes the biologist She explains that microtearing and incoming inflammatory cells are responsible for the pain attributed to muscle soreness that we feel 24-72 hours after exercise.

"Inflammatory cells are the cleaning crew that removes damaged tissue fragments, creating a space to rebuild and strengthen the muscle scaffolding" - she says. In the meantime, inflammatory cells secrete agents that activate skeletal muscle stem cells called satellite cells near the place of microdamage.

Satellite cells, in turn, are muscle guards responsible for their growth and regeneration. Activation of satellite cells starts a chain of events leading to the reconstruction of damaged tissue architecture. At first, satellite cells begin to divide, and their number peaks three days after the training. Then, when there are enough of them, they begin to differentiate into muscle cells, from which muscle fibres will be formed after about 5 days.

"As a result of regeneration, muscle contractile units are reproduced and new fibres are formed, and consequently the muscle strength and mass grow. Thus, microtearing stimulates the body" - says Anita Helińska.

"This means that muscle soreness - in spite of pain - is something good for the body. It stimulates the growth of muscle mass and strength, and thus increases the blood supply and muscle innervation. Properly planned physical activity also increases the pool of satellite cells that reside in the fibres, which allows our muscles to regenerate faster and slows down the aging process" - describes the trainer.

Inflammation was once considered something bad that should be eliminated. Ice baths were recommended to athletes. "This idea is no longer promoted because the muscles of such athletes take longer to regenerate, which means that their strength increases more slowly" - says Anita Helińska.

She explains that such a physiological, post-exercise inflammation is an essential factor activating satellite cells, so inhibiting the action of inflammatory cells by very low temperatures is not entirely beneficial.

The biologist advises how to support normal muscle regeneration. "The biggest mistake is not getting enough sleep. Sleep is the best time for multiplication of satellite cells in our muscles and regeneration of the body after exercise" - says Anita Helińska.

It is also important that the day after intensive workout should be a day without exercise. "If we feel pain in the muscle parts trained the day before, we should not push them again on the next day. If we really want to move a bit, the best course of action is 20-30 minutes of light jogging, for better oxygenation of muscles" - she says.

"The right diet is also extremely important. The scientific sources agree that nutrition has a significant impact on both the quality and the effects of training. If we do not provide the body with building materials, that is, the right amount of proteins, fats and carbohydrates, or supply poor quality raw materials, muscles will not regenerate properly" - she says.

Incorrectly performed exercises, overtraining, bad diet and lack of time for regeneration are factors that carry the risk of muscle fibrosis, when a connective tissue is created instead of new fibers in the microtearing site. "This makes muscles much weaker" - the biologist points out.

BURNING CALORIES - FROM SUGARS OR FATS?

The purpose of exercising is often fat burning. "Excessively intensive exercise is not conducive to reducing fat mass. Anyone who thinks that sweat is fat burned from the body is wrong!" - says Anita Helińska.

She explains that fat is oxidized - as the word suggests - in aerobic conditions, so oxygen is essential for this process. Meanwhile, excessively intensive, for example interval effort, means that insufficient amount of oxygen is supplied to the muscles. As a result, we do exercises in anaerobic conditions.

"We do burn a lot of calories, but 80 percent of them comes from muscle glycogen, carbohydrates not fat. And the point of weight loss is reducing body fat. In this case, the important part is what we burn, not how many calories - she says. Medium-intensive exercise is recommended for fat burning, for example 30-40 minutes of cycling or running on a treadmill. Interval training such as Tabata or Zumba should be used as an extra to supplement aerobic training. They will be a new stimulus for the body to turn up the metabolism, and prevent aerobic training from becoming monotonous" - says the biologist.

The biologist also emphasizes that fashionable fasted training is not always recommended for amateur athletes who want to burn fat. "A lot depends on the body - some will benefit from exercising on an empty stomach, others will not. From the physiological point of view, the lack of carbohydrates in breakfast can result in a too low blood glucose (hypoglycaemia) and fainting during training, as well as weaker muscle regeneration. Fats +burn in the heat of carbohydrates+ so I recommend to eat at least a small amount of carbohydrates, for example a banana, some dates, or drink a glass of juice or an isotonic drink before the morning workout" - the doctoral student says.

Anita Helińska also says that regular sporting activities can prolong life, because they also have a stimulating effect on another muscle that is very important to the body - the heart.

"The heart is the strongest muscle in the body. Professional athletes have physiological changes in this muscle, and their size depends on genetic conditions, type and intensity of training. It has been observed that in such athletes regular exercise results in the increased volume of the chambers (mainly the left ventricle) and cardiac muscle hypertrophy. Their hearts are bigger and stronger than in the case of other people" - she says.