Humans can see infrared! Polish researchers are looking for applications 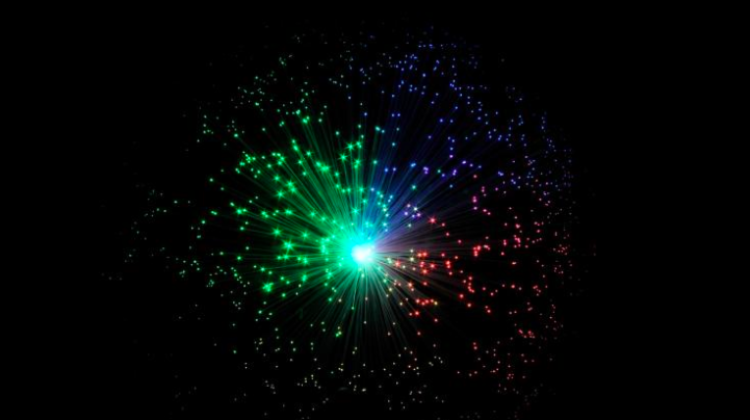 It would seem that the structure of the human eye does not allow us to see infrared light. This is not entirely true! It turns out that we are able to see short laser flashes in the infrared range. Polish scientists were among the scientists who explained this phenomenon. Now they are looking for possible applications of this discovery.

The alien from the movie "Predator" efficiently moved in the dark, noticed changes in the temperature of the objects in its surroundings and was able to spot people hidden in the jungle from a distance. All because the creature could see in infrared. A man does not have such abilities - unless he uses a night-vision device or a thermal imager. But this does not mean that we completely unable to see infrared with the naked eye.

A few years ago in a prestigious PNAS publication, an international team led by Polish researchers showed that humans can see super-short laser pulses in the near-infrared range. Such flashes - depending on the length of the wave used in the experiment - may seem green or blue.

It is assumed that the visible light (that humans can see) is radiation wavelengths between 380 nm (violet light) and 780 nm (red light). Near-infrared is radiation with longer wavelengths: between 780 and 1500 nm.

Photons of infrared light carry less energy than photons of visible light. It may seem that the eye is not sensitive enough to see this radiation. But sometimes the sense of sight can be deceived.

Dr. Katarzyna Komar from the Nicolaus Copernicus University in Toruń talks about the experiment in which a person notices infrared light. Very short laser pulses are directed towards the eye (it is low-intensity radiation, completely safe for the eye). When they are 1000 nm light flashes - the subjects think that they see green light with half the length (500 nm). In turn, infrared laser light with a length of 940 nm appears to the observer as blue light (470 nm).

"The brain is being deceived. The visual apparatus assumes that a photon of visible light has been absorbed in the rod cells and cone cells, and actually these are two photons of infrared radiation with twice the energy" - the researcher says.

The team from Poland showed that the phenomenon in question was the so-called two-photon absorption.

RADIATION THAT CAUGHT THE SCIENTIST`S EYE

The phenomenon of two-photon absorption had been known before. It was known that there were molecules that could be excited as if they absorbed a photon of visible light, while in reality they absorbed two photons of infrared radiation. However, the team, whose members were Polish researchers, showed that this phenomenon also occurred in the human eye with radiation that was harmless to the eyes. "This two-photon absorption takes place on visual pigments - rhodopsin in rod cells and iodopsin in cone cells" - says Dr. Komar.

The researcher will use a National Science Centre grant to better understand the mechanisms that allow people to see such light using different psychophysical methods: examining the sensitivity threshold for two-photon vision, the time of adaptation to the dark or the focus of infrared vision.

Meanwhile at the Institute of Physical Chemistry PAS, Prof. Maciej Wojtkowski (FNP Prize laureate) uses the Team-Tech grant from the Foundation for Polish Science to work on devices for testing the retinal sensitivity that use this phenomenon of two-photon absorption. "Capturing the so-called non-linear effects, and two-photon absorption is one of these effects, indicates higher sensitivity. It is also easier to define a threshold when the phenomenon occurs, and when it does not" - he says.

"We decided to develop devices that test retinal activity - they are called perimeters. We shine a light at the patient`s eye, and he tells whether he sees a light or not. On this basis, we can diagnose the sensitivity of the retina and consequently its diseases" - says the physicist.

He explains that until now perimeters were based on measurements with visible light. The research of Polish scientists shows that infrared can also be used.

Professor Wojtkowski adds that research on infrared vision is very ambitious and multithreaded, which is why three Polish research centres (the Institute of Physical Chemistry PAS, the Nicolaus Copernicus University and Baltic Institute of Technology in Gdynia) take part in various projects related to this topic, as does AM2M, a company from Toruń that produced the first prototype infrared perimeters. Now opticians in Cleveland and Heidelberg, and soon also in Basel, will test patients with various vision diseases and check whether the results of infrared light tests can actually improve the diagnosis. And whether the sensitivity of the device is better than that of traditional perimeters.

Meanwhile, Prof. Wojtkowski`s team continues to research on a new diagnostic method that would automatically scan the retina with infrared radiation in search of regions that are more and less sensitive. Researchers want this device to work automatically - the patient would not have to say when he or she sees the light. The device would receive this such information directly from the eye and allow for faster diagnosis. And this - scientists from the Institute of Physical Chemistry PAS hope - will be possible thanks to the fact that two-photon absorption occurs in the eye.