Polish invention could revolutionize the treatment of hernia 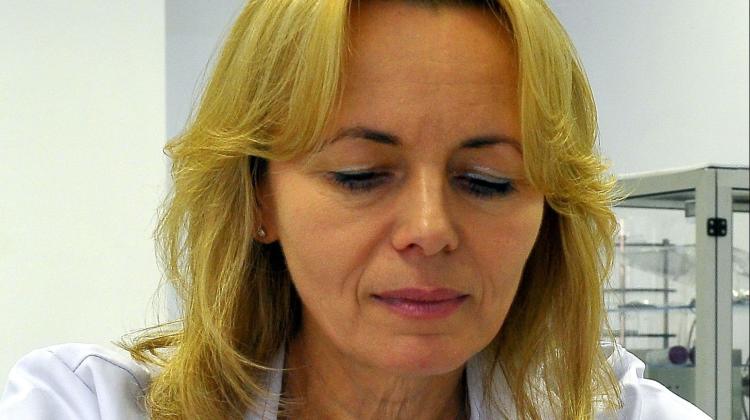 Head of the Department of Functional Materials and Biomaterials at the West Pomeranian University of Technology, Prof. Mirosława El Fray. Photo: PAP/Marcin Bielecki 06.06.2017

Instead of using a synthetic mesh to treat hernia, you could use a flexible patch that can revolutionize soft tissue reconstruction procedures, especially hernia treatment, believes Prof. Mirosława El Fray from Szczecin.

Hernia is caused by the exit of an organ (such as an intestine) from the abdominal cavity through an opening in the wall. A common cause is weakened abdominal wall due to the collagen loss that progresses with age. Lack of exercise, obesity or hard physical work are the contributing factors.

Inguinal hernia is the most common type, affecting approx. 30 percent men, but femoral hernia is more dangerous because it more often leads to incarceration of the intestines, usually the small intestine. There is also an umbilical and incisional hernia.

Hernia often requires surgical treatment. About 40,000 hernia repair surgeries are performed in Poland every year, and in the United States and the European Union it over 2 million surgeries per year.

The gold standard in the treatment of inguinal hernia is the so-called Lichtenstein method. In this procedure, repair is accomplished by covering the opening of the hernia with a patch of mesh made of synthetic material. Polypropylene mesh used in this technique remains in the body for years.

The new method proposed by Prof. Mirosława El Fray from the West Pomeranian University of Technology in Szczecin uses injectable material, which takes the form of a flexible patch under the influence of UV light, and over time overgrows with soft tissue to eventually biodegrade in the body.

The specialist believes that this technique - called PhotoBioCur - may prove to be a breakthrough in the treatment of hernia. "The semi-liquid form of the biomaterial carries a number of benefits associated with the effectiveness of the procedure: it shortens the time of the procedure, it is safer and more comfortable for the patient, it positively affects the course and duration of convalescence" - she adds.

Investment fund YouNick Mint invested in the PhotoBioCure technology developer Poltiss, providing support in the amount of PLN 2 million. The investment was made with the support of the National Centre for Research and Development funds from the BRIdge Alfa programme.

Co-founder of Poltiss Tomasz Lasecki emphasises that this investment will allow to carry out the research and development work necessary to demonstrate the effectiveness and safety of this technique. "In the next stages, we will have to launch the marketing approval procedure" - he adds.

The patch for the treatment of hernia has already been patented in the United States and in Poland, and it is patent pending in Europe. It is expected that in addition to the abdominal wall regeneration, it can be also used in the surgical treatment of abdominal aortic aneurysm, plastic surgery and hand orthopaedics. (PAP)