Photoreactors the size of a hair 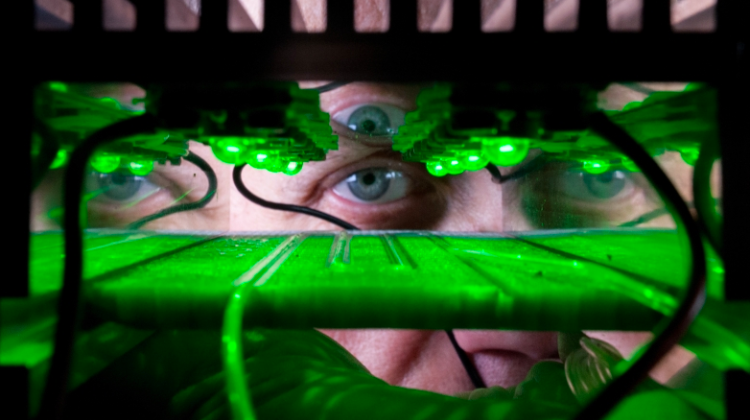 Smartphone-sized devices capable of purifying water for one person using sunlight; desktop modules producing substances valuable for the pharmaceutical industry from chemical waste. The construction of such innovative instruments, providing the product not in batches but continuously, is becoming possible thanks to an ultrasonic technique of depositing titanium dioxide layers onto the inner walls of tubes with diameters of even micrometre dimensions.

Ultrasound is associated with the imaging of internal organs, echolocation or surface treatment of materials; it is also used to remove coatings of impurities. At the Institute of Physical Chemistry of the Polish Academy of Sciences (IPC PAS) in Warsaw, instead of being used to destroy layers, ultrasound has been used for exactly the opposite purpose: for the precisely controlled deposition of a coating of titanium dioxide (TiO2), a compound known for its photocatalytic and self-cleaning properties.

In an article in Ultrasonics – Sonochemistry, researchers from the IPC PAS were the first to describe the technique of depositing TiO2 nanoparticles on the inner walls of tubes with diameters of micrometres – similar to the dimensions of a hair. Polymer tubes prepared in this way become microfluidic photoreactors. Exposed to sunlight, these devices can be a continuous source of clean water or can be used to obtain valuable intermediates for the pharmaceutical or perfumery

“Titanium dioxide deposited on the inner walls of microtubes, patent pending, is the key element of our technique. With the appropriate use of ultrasound, we can produce homogeneous layers of photocatalyst of precisely controlled thickness in the tubes, optimized for specific chemical processes,” says Dr. Eng. Juan Carlos Colmenares, professor at the IPC PAS, and notes: “With the tubes coated with a photocatalyst inside, we are able to perform non-stop reactions with the continuous flow of liquid through the system. It's an innovative approach. In existing photoreactors, the liquid has to be purified in batches which, in addition, usually consist of hectolitres of fluid.”

In practice, the photomicroreactor is a polymer tube about half a metre in length and with an external diameter close to a millimetre, coated on the inside with a layer of titanium dioxide and wound on a glass baguette. The liquid to be processed is forced inside the tube by means of an external, small dosing pump and reacts with the photocatalyst which is activated by light. Selecting the thickness of the layer of TiO2 nanoparticles (at the stage of its deposition in the presence of ultrasound), and also by modifying the length of the tubes or the flow rate, it is possible to influence the chemical composition of the liquid flowing out of the microreactor.

The possibilities of photomicroreactors are seemingly not great: on a daily basis a single system is able to produce advanced chemical products in quantities of the order of milligrams. Fortunately, individual devices are small in size. Hundreds, if not thousands, of such instruments can thus be placed on the surface of a bench, scaling production efficiency adequately to needs. All that is needed is for each photomicroreactor to be provided with illumination of the correct wavelength and of a sufficient intensity to initiate the photocatalytic reactions. In practice, more than a dozen individual photoreactors can be placed in the volume occupied by a slightly larger smartphone. If their task was, for example, to purify water, they would be able to deliver it in quantities of even up to several litres a day.

“In our latest publication, we showed that in photomicroreactors it is possible to effectively purify water from phenolic contaminants in flow conditions. However, in the laboratory we have already carried out experiments, during which we used solutions containing model compounds of lignin components, a very chemically rich substance, but one of the more troublesome waste products of the paper industry. Here the result of the photomicroreactor's work was chemical compounds with high added value: intermediates from which valuable drugs or fragrances can be synthesized,” says Dr. Vaishakh Nair, on a postdoctoral internship at the IPC PAS.

During tests at the IPC PAS it was shown that the internal coatings of titanium dioxide are durable. Although they may become dirty, this is not a problem due to the properties of TiO2: if it needs cleaning, the tube just needs to be exposed to light for a certain period of time.

The small size, the ability to work continuously in conditions of flow and the ability to easily expand the system make the new photoreactors great candidates for regenerating systems for closed circuit systems, such as a spacecraft. An additional argument for their use in space technology is the fact that outside the Earth's atmosphere, sunlight is much more intense. This means that photocatalytic reactions in space will be able to run more efficiently than on Earth.

A broader discussion of the issues and perspectives associated with flow photomicroreactors has recently been included by Dr. Colmenares's team in an extensive review, published in one of the most prestigious scientific journals Chemical Society Reviews of the British Royal Chemical Society.

The above research was financed from the SONATA BIS grant (project 2015/18/E/ST5/00306) from the Polish National Science Centre. This press release was prepared with funds from the European ERA Chairs grant under the Horizon 2020 programme.