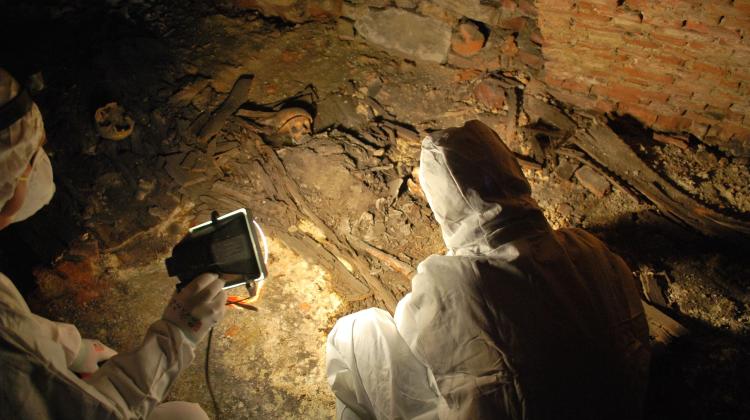 Remains of burial pits, probably from before the 17th century, containing human remains, were discovered during renovation and restoration work under the floor of the Basilica of the Assumption of the Blessed Virgin Mary in Rzeszów.

The discovery in the basilica belonging to the Bernardines was made at the beginning of the restoration work by archaeologists from the Rzeszów Archaeological Centre Foundation. Under the removed floor, they found the remains of burial pits. According to Dariusz Bobak, they are associated with the former cemetery, which was located in the place of the present church before its construction, before the beginning of the 17th century.

During the study of burial pits, archaeologists found valuable monuments, including fragments of ceramics, nails, coins and bones.

"Uncovering two crypts, including one previously unknown, was extremely important. The larger crypt, located on the southern side of the transept, consists of several rooms. At least five people were buried there. Their remains were placed in coffins in an upright position, with hands folded in prayer" - says Bobak.

Anthropologist Joanna Rogóż says that these are bones of 4 adults, including at least one young person, about 25 years old, as well as one small child, possibly a newborn. Two skulls were cut across, which means that the deceased were members of a higher social class.

In addition to fragments of coffins, elements of costumes and a Rosary have also been preserved.

In the second, smaller crypt, located on the opposite side, archaeologists discovered the remains of several coffins, probably also filled with bones. This crypt has not been explored yet.

According to Bobak, these crypts are younger, built in the present church, meaning that they date back no farther than the seventeenth century.

The human remains and coffins found in the crypts will be subjected to further analyses, which will allow to determine the age, sex and physical condition of the buried people.

Bobak believes that although archaeological research conducted in the St. Bernardine church in Rzeszów is only in its initial phase, it has already provided a lot of important information.

"First of all, it substantiates the information about the existence of a wooden church that preceded the basilica. The study of the crypts could allow to connect the deceased with historical figures" - the archaeologist explains.

Father Rafał Klimas, the custodian of the sanctuary, reminds that ordinary people were not buried in churches. Such burials were reserved for more distinguished members of the community, such as founders, abbots and priors. He says that these could be the remains of the Lubomirskis or the Ligęzas.

Burial pits were found during the second phase of renovation and restoration work in the basilica that includes floors and polychromies on the walls. The discoveries under the floor are a surprise, because archaeologists did not expect to find burial pits predating the temple.

The total cost of the renovation and conservation project in the basilica is PLN 3.6 million. Work will continue until the end of October.

The Rzeszów Archaeological Centre Foundation was established in 2004. Its basic activity is conducting archaeological research in the areas under conservation protection.

The foundation also carries out projects financed under the priority "Protection of archaeological heritage" of the Ministry of Culture and National Heritage. It is a sponsor and co-organizer of the national competition for the best master's thesis in archaeology.