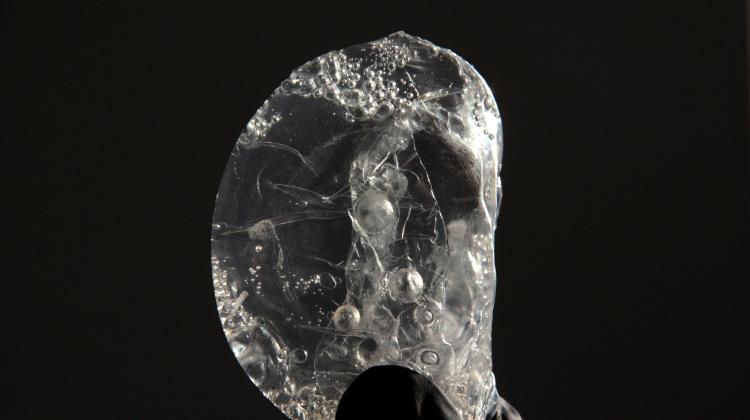 Some bacteria under stress begin to produce ... plastic. This material - not artificial at all - decomposes fairly quickly in the environment, and it is biocompatible. It can be used for the production of dressings or coating implants.

"I study bioplastics produced by bacteria" - microbiologist Dr. Maciej Guzik from the Institute of Catalysis and Surface Chemistry PAS in Kraków says in an interview with PAP.

He explains that we already know more than 150 species of bacteria that produce plastic-like polymer under stress. "Just like bears that put on fat for the winter, when difficult times come these bacteria put on bioplastic. It is their supply of carbon and energy" - he says.

"When we look at such a bacterium under a microscope, we see pearls inside it. It is a bioplastic, and these granules can account even for 90% of the mass of bacteria" - says the microbiologist.

His team focuses on elastic biopolymers, especially PHAs (polyhydroxyalkanoates). The properties of one of the PHA subgroups are similar to polyethylene. And polyethylene is used to make such products as plastic wraps and fishing lines.

Bacterial plastics are biodegradable. They quickly break down in a natural environment. "For example, if our bioplastic goes to compost, where there is moisture and heat, it will decompose into carbon dioxide and water in just three months" - describes the microbiologist.

IN HARMONY WITH NATURE

"Another superproperty of these bacterial polymers is their biocompatibility" - adds Dr. Guzik.

He explains that the human body is able to efficiently "cut" these polymers into small fragments - they are completely harmless to us.

Polymer molecule can be compared to a long chain. It turns out that in the case of bioplastics (such as PHAs), the links of this chain are fatty acids. The same fatty acids that are found in our food and form fats. So when the body comes into contact with a biopolymer, it gradually cuts off its links and simply feeds on them - converts them into energy.

Dr. Guzik wants to use biopolymers in medical applications. The material will be great for dressings that would accelerate the healing process. This applies especially to the treatment of extensive wounds.

Polymeric mesh - or foam - would be used to make the bottom part of the dressing that adheres to the wound. This part of the dressing would not have to be changed. "Our biopolymer would stay on the wound and nourish the cells around it. This would accelerate skin growth. We are now developing this type of dressing" - explains the microbiologist. He adds that the body would eventually get rid of the remains of the dressing.

The Polish dressing could have additional functions - for example, gradually release drugs to the wound: antibiotics or anti-inflammatory agents. The wound would be additionally protected against infection and inflammation.

Dr. Guzik emphasises that his team would also like to produce custom dressings. The dressing would contain medications selected specifically for a particular patient. "If we already have a perfected process, it would probably take us one day to prepare such a tailored dressing" - believes the scientist.

Scientists from the Kraków institute are also working on the application of bioplastic in implants - for example in bones. "We coat ceramic implants with a layer of our bioplastic. In the future, we plan to apply isolated patient's bone cells onto that layer. Thus prepared, the implant which will be implanted in the patient" - says the scientist. He explains that this would give the body more time to "get used to" the implant and reduce the risk of rejection.

Dr. Guzik's research on the application of bioplastics in medicine is funded with the LIDER grant of the National Centre for Research and Development.