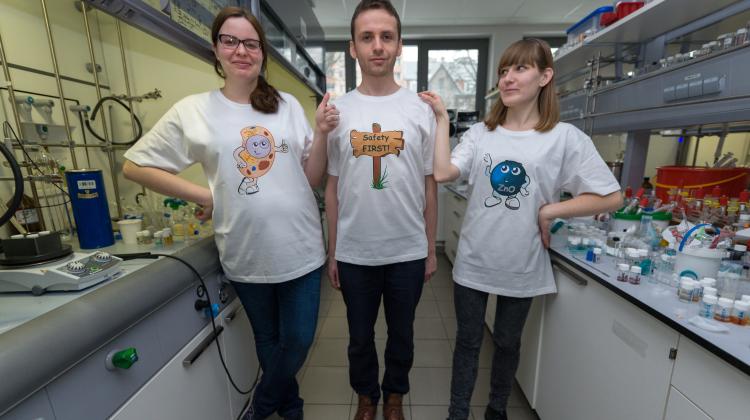 Quantum dots of zinc oxide produced by a new method involving organometallic precursors are safe for human cells, chemists from Warsaw have shown. The Institute of Physical Chemistry PAS has announced a new method of producing ZnO quantum dots.

Nowadays, zinc oxide nanoparticles are one of the most commonly used nanomaterials. They seem to be safe for humans, but there are still no standards for their toxicity and despite intense investigations, the toxicological impact of ZnO nanomaterials still remains ambiguous.

Researchers from the Institute of Physical Chemistry of the Polish Academy of Sciences (IPC PAS) in Warsaw and the Faculty of Chemistry of the Warsaw University of Technology (PW) have recently developed a method for producing defect-free ZnO quantum dots with physicochemical properties that are particularly interesting and do not change over time, such as monodispersity, a relatively high quantum efficiency, record-long luminescence lifetimes and EPR silence under standard conditions. The unique features of the tightly coordinated and impermeable organic shells stabilizing the surface make the new ZnO quantum dots resistant to both chemical and biological environments.

"The zinc oxide nanocrystals of unprecedented high quality obtained by us are characterized by significantly better chemical and physical properties than their counterparts currently being produced by the most popular sol-gel method involving inorganic precursors", emphasizes Prof. Janusz Lewinski (IPC PAS, PW). "The luminescence lifetime, or luminance, in the case of our quantum dots is much longer - by even up to several orders of magnitude! Moreover, until now only short ZnO photoluminescence decays have been observed, of the order of a few to a dozen-or-so picoseconds characteristic for sol-gel nanoparticles, or slightly longer, nanosecond ones, typical only for ZnO monocrystals. What we have is a luminescent material that can be used, for example, as a new generation optical marker for biomedical applications."

Combined with biologically active molecules, the new nanoparticles could be used in biology or medicine, e.g. for imaging cells and tissues, which would enable much more accurate monitoring of disease development and efficacy of treatment. In a recent publication in the well-known scientific journal Chemistry - A European Journal, the Warsaw scientists, in collaboration with a group from the Jagiellonian University in Cracow, showed that their zinc oxide nanoparticles are indeed safe. The research, funded by the TEAM grant from the Foundation for Polish Science and the OPUS grant of the Polish National Science Centre, allows us to realistically think about rapid introduction of the new ZnO quantum dots into, among others, biological and medical laboratories.

ZnO nanocrystals manufactured in a classic manner by the sol-gel method are not well stabilized or isolated from the environment. For example, interactions that occur at the interface between the inorganic ZnO core and the biological environment can lead to the generation of reactive oxygen species or the dissolution and release of potentially toxic zinc cations.

"Zinc oxide is generally considered as a relatively safe and biocompatible material. However, many toxicological studies of ZnO concern nanoparticles that are heterogeneous in size and also too large to be able to penetrate into cells. We also realized that in practice many of the characteristics of nanoparticles depend not only on their size, but also on the surface properties of both the nanocrystalline ZnO and the organic stabilizing layer. Therefore, we decided to modify our one-pot self-supporting organometallic method of synthesis, so that the ZnO nanoparticles resulting from it behave as neutrally as possible in the interior of the cells," explains Dr. Malgorzata Wolska-Pietkiewicz (PW).

Prof. Lewinski's team produces quantum dots of zinc oxide from organometallic compounds (precursors). When the purpose is biological applications, the end result is stable nanoparticles with a shape that is similar to a sphere, consisting of a crystalline ZnO core with a diameter of 4-5 nanometres surrounded by a shell of organic ligands. This shell increases the size of the nanoparticles (their hydrodynamic diameter is about 12 nm) and has protective functions: on the one hand it protects the inorganic core from degradation due to interaction with what is often a very reactive biological environment, on the other hand it eliminates the influence of ZnO itself on this environment.

"Nanoparticles with core sizes below 10 nm penetrate inside the cells particularly easily. Such particles are considered to be potentially the most toxic. Interestingly, the ZnO nanoparticles created by us, contrary to popular opinion indicating that the smaller the systems, the greater their toxicity, showed extremely low harmful effects in in vitro model tests. The recent results as well as the studies carried out simultaneously in the parent team provided further evidence of the unique character of the nanocrystalline ZnO obtained as a result of the transformation of organometallic molecular precursors," notes Dr. Wolska-Pietkiewicz.

The research on ZnO quantum dots gives hope for numerous applications. However, there are concerns about their biological and environmental impacts. Nanoparticles can enter the body and among others, the respiratory tract is frequently exposed to elevated concentrations of different nanomaterials and becomes the primary target site for toxicity. Therefore, A549 and MRC-5 cell lines were selected as in vitro models for internal malignancies and normal lung cells, respectively. Researchers from the IPC PAS and PW showed that the organic layer surrounding the improved nanoparticles is indeed impermeable: zinc ions are not released into the environment, and reactive oxygen species are not formed. Even at high concentrations, the toxicity of the new ZnO nanoparticles turned out to be negligible.

"Our 'recipe' for the production of ZnO quantum dots means that they simply do not interact with the biological environment. So we have a strong foundation on which to start working on their applications. Not only in medical imaging, but also in other areas in which nanoparticles could potentially interact with the human body, for example, as one of the components of paint. We are also developing a new technology for the synthesis of ZnO quantum dots and searching for potential applications as a part of NANOXO, a start-up company", summarizes Prof. Lewinski.