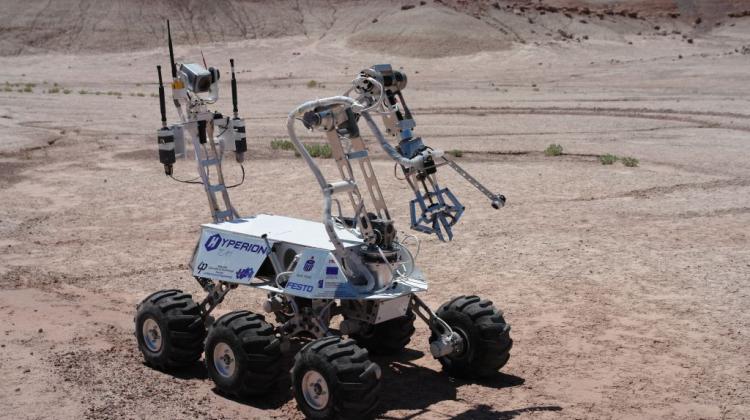 Two parallel categories of Mars rover competitions, workshops and a science and technology demonstration zone are the main attractions of the 4th edition of the European Rover Challenge. The event will take place in mid-September in Starachowice.

The European Rover Challenge (ERC) is a prestigious competition of Martian rovers built by student teams. The ERC is the European counterpart of the University Rover Challenge held in the United States. The first edition of the ERC was organized in 2014.

The first two editions of the ERC were held at the Regional Science and Technology Center in Podzamcze near Kielce. The organizing committee moved the third edition to Podkarpacie (the event took place in Jasionka near Rzeszów).

This year, the event returns to the Świętokrzyskie province. It will take place in mid-September at the Museum of Nature and Technology in Starachowice. "We have responded to the invitation of the European Space Foundation with great pleasure. Many people are interested in automation and robotics. This event will allow them to learn about new technologies, talk, participate in workshops" - governor of the Starachowice county Danuta Krępa emphasised during a press conference.

Marcin Perz, president of the Starachowice Special Economic Zone, one of the event's partners, said that the ERC would become a periodic event in Starachowice. "We want the whole world to know Starachowice and write in the calendar of trips and presentations that this is the place to be in September" - he added.

Students from all over the world have been traditionally invited to compete in this year's edition of the ERC (in the ERC Student competition). There will also be a new competition for professional teams (the ERC PRO competition).

"It is a nod to very advanced teams that today are actually companies, but they are also still the teams that have won many competitions. They feel that they have outgrown the ERC Student formula, they want something more - to establish business relations and commercialise themselves and their robots" - explained Łukasz Wilczyński, President of the European Space Foundation.

He added that another new addition this year would be the main prize in the ERC Student competition. "The winning rover will take part in a serious simulation mission carried out by the Austrian Space Forum in the Arabian Peninsula in 2020" - said Wilczyński.

In addition to the competitions of Mars rovers, the organizers have also planned workshops on mentoring, search for new technologies, and a science and technology demonstration zone for all those who want to learn more about space and related technologies.

The previous three editions of the ERC attracted about 70,000 viewers. 120 teams took part in the Mars rovers competition, about 700 participants in total. The finalists include teams from 15 countries, including Australia, the United States, Canada, Spain, India and Colombia. "We are working on attracting more teams from Europe" - says Wilczyński.

The honorary patrons of this year's edition of the ERC are the Ministry of Science and Higher Education, the Ministry of Digital Affairs, the National Centre for Research and Development and the Polish Space Agency.

The mission of the European Space Foundation is to promote science and knowledge, and support research projects related to space technology, engineering and astronomy. The Foundation deals with cooperation and transfer of knowledge between enterprises and institutions. It is a non-profit organization.