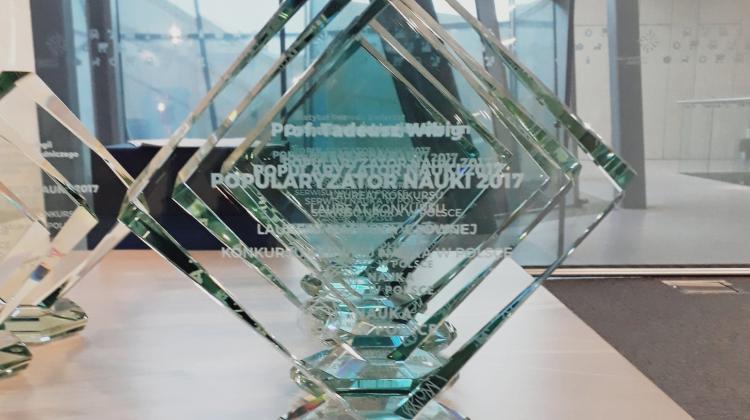 Prof. Tadeusz Wibig, Dr. Andrzej Katunin, Jan Świerkowski, the website "Nauka o klimacie" ("Climate Science"), TV show "Astronarium" and the Institute of Animal Reproduction and Food Research of the Polish Academy of Sciences are the winners of Science Populariser 2017 competition organized by PAP - Science in Poland and the Ministry of Science.

The results of the 13th edition of the competition were announced on Monday in Warsaw, during a gala at the Copernicus Science Centre. The ceremony was attended by Deputy Prime Minister, Minister of Science and Higher Education Jarosław Gowin and President of the Polish Press Agency Wojciech Surmacz.

The competition awards the people and institutions that help others better understand the world, and are able to interest persons not involved in science in scientific developments.

During the Monday gala, Jarosław Gowin said that the activity of science promoters is "even more important than in the past".

"As a country, we are in the process of implementing the Responsible Development Strategy. This can not be accomplished without stronger ties between science and the economy, but to build this bridge, Polish citizens need to be persuaded of its necessity. In short, we need to explain Polish citizens why it is worth it, why it pays to invest in science" - emphasized Deputy Prime Minister.

President of the Polish Press Agency, Wojciech Surmacz, also spoke about the need to support science in our country. "It is worth investing in Polish science, as an economic journalist I have repeatedly learned that Polish science is dramatically underinvested" - he said.

Minister Gowin reminded that one of the three pillars of his ministry's strategy is the social responsibility of science - that is, the popularisation of scientific achievements. The minister reminded that the Ministry of Science and Higher Education had launched several programs to support promotion activities: children's universities, third-age universities and mobile laboratories - Science Buses.

"But I am fully aware that what the ministry does is only a small support for a much broader and much more important activity, which is carried out by hundreds or thousands of people such as yourselves: real science enthusiasts, real enthusiasts of having knowledge about scientific achievements, scientific discoveries reach as widely as possible - that is, the promoters of science" - he said, addressing the winners of the competition.

The chairman of the competition jury Prof. Michał Kleiber is also convinced that popularising science is of extraordinary importance for the future of both science and the country. "Popularisation of science is part of the scholar's mission. Every scholar should think about how to talk about what he does. It is his duty" - he stressed.

The jury chaired by Prof. Kleiber granted the main lifetime achievement award to Prof. Tadeusz Wibig from the University of Lodz.

The physicist studies high-energy particles that reach the Earth from space. He dedicates his energy to awakening the interest of successive generations in science. For many years he has been doing voluntary work: he gives visiting lectures in schools, organises competitions, writes fictional stories to promote mathematics and articles about eccentric physicists. He includes students in the academic community, enabling them to publish their essays and become co-authors of articles published in scientific journals.

This year's winner in the Scientist category was Dr. Andrzej Katunin from the Institute of Fundamentals of Machinery Design of the Silesian University of Technology. Every year during the Silesian Researchers' Night, the fractal geometry expert talks about objects built of smaller and smaller copies of themselves. He also cooperates with Children's Universities and together with his students he popularises problems from the border of mechanics, chemistry and materials science. "Promoting science is a passion" - said Katunin, accepting the award.

The award in the Animator category went to Jan Świerkowski, the leader of the B61 Institute who promotes science by combining the work of artists and researchers. His performances have been watched by over 20,000. spectators, and the exhibition "Cosmic Underground" (realized on a freight train) travelled across Europe: from Tallinn, through Poland, to Lisbon.

"It is important for our team of scientists and artists to work out a language of understanding with the public" - emphasised Świerkowski.

The Institute of Animal Reproduction and Food Research of the Polish Academy of Sciences was awarded in the Institution category. For many years the institute has coordinated the Researchers' Night in Olsztyn, organised the picnic "Science is Art Too" and extended patronage over the Polish Children's Academy conferences. It's guests can participate in riddles workshops "Escape the Lab", and the mobile laboratory - Noah's Ark for endangered species - travels all over Poland.

In the Team category, the title of Science Populariser 2017 went to the creators of the website "Nauka o klimacie" ("Climate Science": Prof. Szymon Malinowski, Dr. Aleksandra Kardaś, Marcin Popkiewicz and Anna Sierpińska. They have described (and busted) more than a hundred myths about the climate, and the Facebook page of Nauka o klimacie already has almost 13,000 fans. fans. For several years they have been organizing the poll "Climate Nonsense of the Year".

"Global warming is not fake news. Science says a lot about it - and we're trying to explain it" - said Prof. Szymon Malinowski.

In the Media category, the jury awarded the TV show "Astronarium" produced by TVP Bydgoszcz. Each episode of this popular science astronomy show has up to a million viewers. The 50th episode was broadcast in December, but its creator - Bogumił Radajewski - has ideas for several dozen more episodes.

The jury also decided to award two special mentions. One of them went to Marta Szmigiel, a PhD student at the Faculty of Fundamental Problems of Technology at Wrocław University of Technology. Members of the jury recognised her workshops for children, during which the physicist popularises the problems related to optics. The projects were accompanied by the initiative of screening eye tests of 1625 children.

The second special mentions was awarded to the employees of the Chair and Department of Medical Chemistry of the Medical University in Lublin. For years, they have been participating in popularising festivals, open days and science picnics, where they tell children and adults about human chemistry and biochemistry. They lecture at the University of the Young Explorers, organise workshops for secondary schools and at the Science Festival in Podmokla Małe. Their projects have won awards for the best shows and picnics at the Lublin Science Festival.

Like every year, the editors of PAP - Science and Scholarship in Poland granted special Tomasz Trzciński Award for the benchmark information policy. The award went to the Institute of Zoology at the University of Life Sciences in Poznań. The zoologists do not need a press office to be frequent and spontaneous guests in both local and national media. Head of the unit, Prof. Piotr Tryjanowski considers sharing of research results with the public a priority.

The laureates received diplomas and statuettes.