Global "suffocation" of seas and oceans: oxygen deserts are expanding 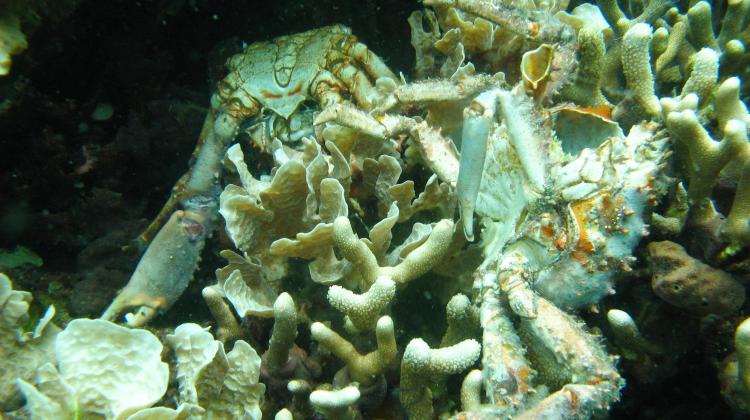 Low oxygen causes the death of corals and in Bocas del Toro, Panama. The dead crabs pictured also succumbed to the loss of dissolved oxygen in the water. Credit: Arcadio Castillo/Smithsonian

Oxygen depletes in the oceans and seas all over the world around the world. Regions with dangerously low oxygen level have increased in the last 50 years by an area as large as the European Union - scientists alarm. Publication about this appeared in Science.

Scientists point out that human activity is the main factor contributing to the deoxidation of oceans and seas. Firstly, it is due to an increase in the temperature on the Earth, or global warming, caused by excessive carbon dioxide emissions. The second reason for the deoxidation of oceans are fertilizers and sewage, unprecedented amounts of which reach the seas by rivers after flowing from the fields.

We do not realize how important water with bubbles is for life. This is naturally not about bottled sparkling water, saturated with carbon dioxide. Inhabitants of the seas and oceans - fish, crustaceans, corals, sponges, octopuses - would not be able to survive without another gas - oxygen dissolved in water. When the oxygen concentration in the environment decreases, these animals have to drastically reduce energy expenditures, which is associated with smaller sizes, less frequent reproduction or much smaller range of search for food. Ultimately, if the life-giving gas runs out, the animals will simply suffocate.

It turns out that as much as half of the oxygen on the entire globe, including the oxygen that terrestrial mammals breathe, originates from the ocean. Where does this gas come from in the ocean? It is produced, for example, by tiny aquatic plants - phytoplankton, in the process of photosynthesis.

In the latest publication, which appeared in the prestigious journal "Science", scientists alarm that oxygen content in the seas and oceans all over the world is getting lower. Over the past 50 years, 2 percent oxygen "evaporated" from the open oceans.

"Sea and ocean Oxygen Minimum Zones have increased in the last 50 years by an area as large as the European Union, and the amount of zero-oxygen waters quadrupled" - explains co-author of the publication Dr. Maciej Telszewski from the Institute of Oceanology of the Polish Academy of Sciences in Sopot.

Global warming contributes to ocean oxygen loss. "Over the past 100 years, the average temperature of the oceans has increased by 0.7 deg. C" - Dr. Telszewski reminded. And the warmer the water, the less gas dissolves in it. This can be shown with a simple experiment - just heat up sparkling water and see that it loses its bubbles as the temperature rises - carbon dioxide simply escapes from it. And so does the oxygen dissolved in water.

This is not the end of problems related to global warming. An increase in the temperature of the atmosphere means that water near the surface - usually better oxygenated - mixes less with deep waters. Warm water is lighter than cold water and does not immerse into the lower regions. And that means that oxygen deserts form in the depths more often. "No animals that breathe oxygen can survive there" - said the researcher from the Institute of Oceanology PAS.

Dr Telszewski explains that fertilizers and sewage entering the seas and oceans are ready-made nutrients (they contain phosphorus and nitrogen) that initiate giant blooms of aquatic plants. "Phytoplankton grows wildly in such conditions, and after death it is decomposed in water by specialized microbes. Oxygen is used during this decomposition. This process leads to the formation of giant oxygen deserts in coastal seas" - said the researcher.

The low oxygen problem has a direct negative impact on species biodiversity, the functioning of the marine food chain, and general biomass production. The latter process is inseparable from fishing, especially in the upwelling regions, where low oxygen deep waters can be brought to the surface by sea currents.

Low-oxygen zones are spreading around the globe. Red dots mark places on the coast where oxygen has plummeted to 2 milligrams per litre or less, and blue areas mark zones with the same low-oxygen levels in the open ocean. Credit: GO2NE working group. Data from World Ocean Atlas 2013 and provided by R. J. Diaz

"It just so happens that the strongest and most extensive upwellings - like those off the west coast of South America, the west coast of southern Africa and the seas surrounding India - are the areas with the most attractive commercial fisheries in the world" - said the researcher. He warned that the low oxygen phenomenon can cause big losses there in the long run. The problem, though on a smaller scale, also concerns cod fishing areas in the Baltic Sea.

Dr. Maciej Telszewski noted, however, that global forecasts concerning the future progress of deoxidation of marine and ocean waters are not clear. Mathematical models have to take into account many very complicated and often mutually influencing processes that require gathering more detailed knowledge through observations and experiments. Work on improving global and local mathematical models is basically ongoing and leads to more and more consistent forecasts.

The researcher added that the deoxidation of the ocean is one of the three processes of the so-called deadly trio: ocean warming, ocean acidification and ocean deoxidation. These processes are inextricably linked. "Only their comprehensive understanding will bring us closer to understanding the impact they have on the marine world" - the researcher told PAP. That\'s why - as he said - scientists are now focusing on building new multi-parameter sensors that will allow to effectively study the processes occurring in the depths. This will allow to better understand the links between particular variables. It is also necessary to conduct intensive and systematic observations of oxygen content in sea waters and study the impact of observed changes on organisms.

WHAT CAN WE DO?

But the most important thing, according to the oceanologist, that can be done to slow down the deoxidation of the seas and oceans, is reduction of carbon dioxide emissions. "The scientific community has been repeating this for over 20 years. It is difficult for countries to commit to it, because it often means remodelling economies. But when observing the increasingly widespread and increasingly acute negative impact of greenhouse gas emissions by humans, no other conclusion can be drawn. Renewable energy sources instead of non-renewable ones will certainly have a positive impact on the solution of the problem of suffocating oceans" - he concluded. (PAP)