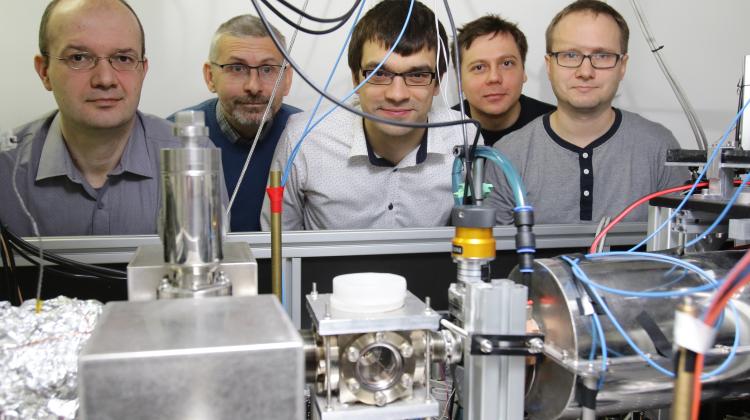 Torun scientists are using the optical atomic clock to look for dark matter. Its existence can be indicated by cosmic inhomogeneities. These invisible seams in space could disturb the ticking of the clock.

The good old ordinary matter from which we are made, as are the planets and the stars, is not so ordinary after all. It can be said that on the Universe\'s scale it is something special. In this ordinary matter, less than 5 percent of energy of the Universe is accumulated. It is estimated that much more energy should be accumulated by dark matter (almost 27 percent) and dark energy (more than 68 percent).

It appears that in the Universe dark matter is something much more ordinary than regular matter. Therefore, why hasn\'t anyone been able to track down dark matter yet?

"We know that dark matter exists, because it manifests itself by gravity. Galaxies behave as if they were placed in a smeared sphere of matter that we do not see. Otherwise they would rotate completely differently. But nobody knows what dark matter consists of and what its nature is" - Dr. Piotr Wcisło from the Nicolaus Copernicus University said in an interview with PAP. The researcher and his team are looking for a more tangible proof of the existence of dark matter.

A HOLE IN THE THEORY

"We use optical, molecular and atomic physics to search for new physics that goes beyond the Standard Model" - said Dr. Wcisło. The Standard Model includes - and combines in a coherent theory - all known particles that form ordinary matter. However, there is no room for dark matter. No wonder, then, that scientists are looking for holes in this theory. A hole through which they would be able to see this dark matter.

Dark matter might be formed by tiny particles, as in the case of standard matter. But that does not have to be the case. The effects associated with dark matter could result from the existence of a new field, which, like the electromagnetic field, fills the entire Universe. Shortly after the Big Bang, in the rapidly cooling Universe, various values of this field could spontaneously appear in different places in space, creating different domains. "It's just like in an ordinary ferromagnetic, where during the cooling process, magnetic domains spontaneously form after passing the Curie point" - said Dr. Wcisło. At the border of these domains, heterogeneity would form - so-called topological defect, such as a domain wall. "Because these two solutions had to be stitched together somewhere" - said Dr. Wcisło. These different domains - and the seams between them - might still exist.

"Imagine this as an invisible wall that passes through the cosmos, or we pass through it. It gravitationally changes the evolution of the galaxy" - Dr. Wcisło described. If we could discover the existence of such walls passing through us - perhaps as wide as the Earth - it could be possible to explain what dark matter is.

THE CLOCK ALWAYS WORKS THE SAME WAY. BUT DOES THE WORLD AROUND IT?

The team from the Nicolaus Copernicus University uses the optical atomic clock in Toruń in their search. "Routine measurements have accuracy between 15th and 17th significant place. If we had a speed camera that accurate, we could measure how quickly America is approaching Europe" - said Dr Wcisło. These studies are conducted at the National Laboratory FAMO in Toruń.

"Optical atomic clocks should work the same, if the same laws of physics apply everywhere. We look in a different direction. We check whether the laws of physics do not change by comparing different clocks" - said the researcher from the Nicolaus Copernicus University. He added: "If the postulated forms of dark matter - the topological defects - really exist, our experiment will tell. For example, if one of the fundamental physical constants changes, we will notice it in the ticking of the clocks".

The physicist noted that when such a "wall" passes through the Earth, the fundamental constants (stitched in patterns) can sometimes wobble. For example, they will change the value on a 15th or so decimal place. "If we observe that one of the physical constants has changed, a completely new physics will open up before us" - said the scientist.

AND SO THE CLOCK TICKS

An atomic clock is a complicated device. It consists of several laboratories. In two laboratories, laser-trapped ultracold strontium atoms are studied to check the differences between the energy levels in these atoms. And in another laboratory, photons are let in between super-reflecting mirrors (optical cavities). Lasers used in these experiments are precisely tuned to each other. "It turns out that if one of the fundamental constants - the so-called fine-structure constant - will change a little, the structure of energy in atoms and optical cavities will also change differently" - said Dr. Wcisło.

MOVING THE BOUNDARIES OF KNOWLEDGE - TO THE WALL

The problem is that without experimental results current theories do not allow to determine the value of parameters describing this type of topological defects (for example the size of the defect or how strongly it interacts with the known matter). "Previous models and measurements can not specify this even by 10-20 orders of magnitude. Our research allowed to narrow it down by another 4 orders" - said Dr. Wcisło. And that means that Polish physicists have moved the boundaries of knowledge and pointed out where dark matter will certainly not manifest itself.

Their research appeared last year in Nature Astronomy. In December 2017, Dr. Wcisło's team received the award of the Minister of Science for their research, and the team leader also received the Award of Division II of the Polish Academy of Sciences.

To move the boundaries of knowledge even further, a single atomic clock is no longer enough. That is why Dr. Wcisło and his team are starting to create a global network of optical clocks, which would look together for effects related to dark matter. For now, researchers are analysing data collected simultaneously by several atomic clocks around the world. They are also developing protocols for the exchange of data and synchronization of atomic clocks in future research. "In the United States, in several laboratories in Europe and Japan, clocks will synchronously listen for the same effects. If we now hear the same 'click' around the world - we will know that this is no accident" - concluded the physicist from the Nicolaus Copernicus University.