Polar biologist: Iceberg calving is an opportunity for interesting research 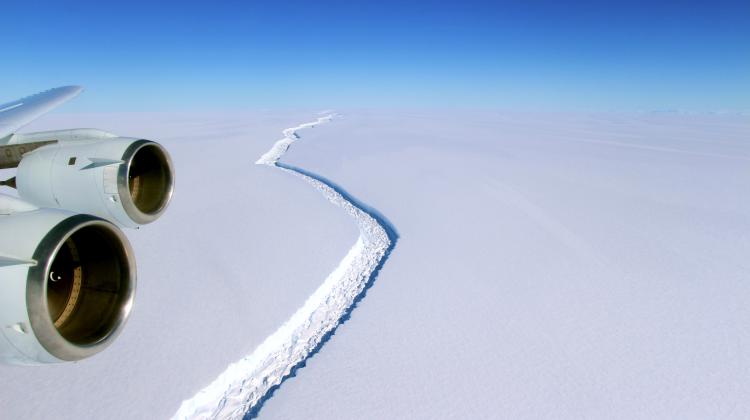 Giant iceberg with a huge area of 6 thousand km2 calving from Antarctic ice shelf reveals areas of the Antarctic Ocean that have been covered with several hundred meters of ice.

"What is beneath it is, of course, a huge mystery and it is exciting in itself. [Unveiling this area - PAP] creates an opportunity to study unknown areas and previously inaccessible ecosystems, as well as monitor, describe or test numerous biological processes" - said Prof. Magdalena Błażewicz from the Faculty of Biology and Environmental Protection, University of Lodz.

As she explained, calving iceberg fragment causes local hydrological disturbances, which in turn may affect many other biological processes.

Theoretically, as the expert suggests, in ice-free areas there should be an increase in primary production, which in practice means the mass appearance of primary producers - single-celled algae (in Antarctica these are mainly diatoms). Their presence may determine the nature of the trophic structure in the area, i.e. the presence of other organisms directly or indirectly dependent on the presence of diatoms.

"Diatoms are the main source of food for aquatic organisms, such as krill, which in turn is a source of food for penguins, for example" - she added. Penguins, on the other hand, are an important part of the diet of higher-order predators.

But there are known cases when hydrological disturbances have a completely different course. Longer persistence of the ice pack, i.e. long-term floating sea ice cover, caused a later algae bloom. For this reason, new generation of krill (which reproduces at the same time of the year) may have limited access to food, which in turn determines the structure of its population. "It can affect the population of its consumers" - added the expert.

Subsequent disturbances related to iceberg retreat are associated with the exposure of specific areas of the Earth to sunlight. In such places, completely devoid of primary production, the only source of food is organic matter falling from the water depth.

Dead ocean organisms falling to the bottom constitute a source of food for the animals that live there. Sudden increase of food supply to the bottom causes qualitative and quantitative changes in animal clusters. However - the researchers admitted - we still do not know much the functioning of sub-ice ecosystems and the changes that they undergo after the glacier has retreated.

Researchers want to understand and be able to predict the nature and direction of these changes. "We would like to study these aspects. While researching aquatic ecosystems can be carried out in short time - in one or two seasons - the ocean floor research, where processes are much slower, requires long-term research" - added Prof. Błażewicz, renowned expert in the field of polar biology and oceanobiology.

Retreating glacier gives an opportunity to discover new ecosystems and organisms. Professor Błażewicz reminded that in 2005, after the retreat of the Larsen A glacier, ecosystems based on chemosynthesis were discovered in the waters of the Southern Ocean, and once with them - new species of animals.

"In this case, the source of food for heterotrophic organisms is not primary production, but chemosynthesis based primarily on methane or hydrogen sulphide bacteria" - added the researcher, who carried out numerous Polish and international scientific projects, during which new species of invertebrates were discovered.

The expert emphasised that the ice-free areas (the places where the iceberg has retreated), become an excellent laboratory for researching deglaciation processes - related to the melting of glaciers. Such processes are also observed in other parts of Antarctica. "This gives us the opportunity to forecast, predict the directions of changes that may occur in the future" - assessed Prof. Magdalena Błażewicz.

In February 2018, Antarctic Ocean research under the detached iceberg will be initiated by British scientists led by Dr. Katrin Linse from the British Antarctic Survey. (PAP)