Gdansk University of Technology has launched a deep learning workstation 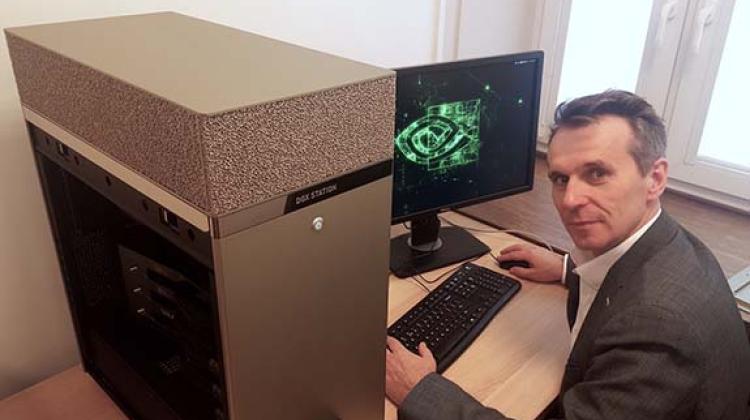 Gdansk University of Technology has one of the world\'s fastest deep learning computers. This is the first such machine in Poland. It can be used to develop models for gesture recognition or medical image analysis.

The computer is equipped with four high-performance graphics cards, which, along with the rest of the equipment, allow to make many quick calculations simultaneously. "This is the fastest computer for numerical calculations enclosed in a small box. It is about 200 times faster than a single processor" - told PAP Prof. Jacek Rumiński from the Department of Biomedical Engineering, Faculty of Electronics, Telecommunications and Informatics, Gdansk University of Technology.

"What distinguishes this computer from many others is the fact that it uses advanced graphics cards dedicated for efficient execution of multiple data-processing operations at once. These graphics cards are manufactured and used primarily for so-called deep learning with the use of deep neural networks, the scientific breakthrough of the last few years" - noted Prof. Rumiński.

The computer\'s features make it possible to analyse thousands of x-ray or computed tomography images or complicated records from other medical devices in a very short time, and perform analyses to identify the anomalies appearing in the images.

According to Prof. Rumanian, in order for the computer to perform such a diagnostic role, it is necessary to first provide it with a very large amount of data (for example x-rays), on the basis of which a model will be developed to analyse specific individual images.

"A doctor learns all his or her life by studying numerous cases, and this computer +learns+ by processing the information supplied to it in very large amounts and generating a model that is then used to analyse and detect anomalies" - explained Prof. Rumiński and added that the device is able to "perform huge amounts of calculations in a very short time based on very large amount of data".

He added that similar equipment could be used, for example, to build autonomous vehicle support systems. "For example, you can create a model that will be able to recognize the surroundings of your car and make various decisions to assist or even replace the driver. This class of computers opens up entirely new possibilities in the field of artificial intelligence" - emphasised Prof. Rumiński.

He explained that the device can also be used, for example, to create a model that recognizes gestures or emotions based on face images. At the Gdansk University of Technology, the computer will in research work carried out by nine research teams.

Prof Rumiński emphasised that according to the information provided by the equipment manufacturer, Gdansk University of Technology is the first institution in Poland and seventh in Europe to have this computer installed.

The device is called NVIDIA DGX Station. It will be used mainly by employees of the Faculty of Electronics, Telecommunications and Informatics of Gdansk University of Technology. It was purchased with funds from the faculty development fund. "This small device the size of a home computer costs PLN 200 thousand net" - Prof. Rumiński told PAP.

Gdansk University of Technology press office announced that the device would also be used, for example, during the international summer school on deep learning, organized by the Department of Biomedical Engineering in July 2018. "We will also soon publish valuable publications promoting the use of modern technologies in the development of new solutions for machine learning and artificial intelligence" - reads the release. (PAP)