The highest situated earthwork in Poland discovered in the Bieszczady Mountains 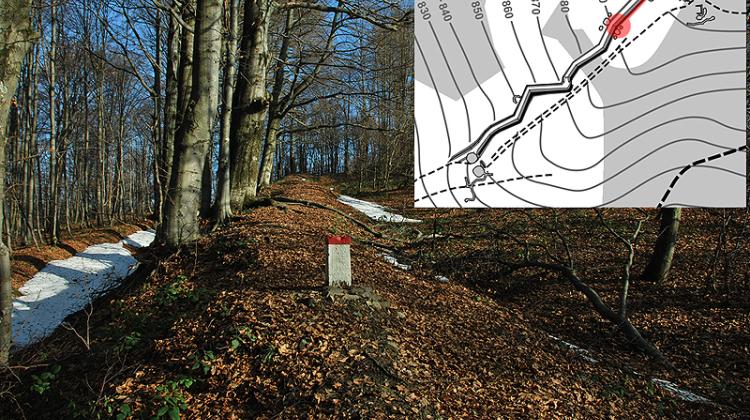 The contours of the earthwork are still visible in the field. Photo by P. Sadowski

The highest situated earthwork (earth fortification) in Poland is located in the Bieszczady Mountains in Roztoki Górne at an altitude of 908 m. It dates back more than 200 years, to the time of the Confederation of Bar - established scientists.

"The earthwork is not only the highest situated structure in Poland, it is also one of the largest in Poland - its surface area is over 2 hectares" - told PAP Dr. Piotr Sadowski from the Podhale State Higher Vocational School in Nowy Targ, who made the discovery together with Krzysztof Sojka from the Association Eagles of History and Michał Filipowicz from the Institute of Archaeology of the University of Warsaw.

In a straight line, the earth structure measures over 340 m. It consists of one defensive line. According to the discoverers it is a tenaille field fortification with typical features of eighteenth-century fortifications.

The fortifications were built by the Bar confederates in 1769. Some historians consider this armed union of the Polish nobility the first Polish national uprising. According to the discoverers, this is the highest situated earthwork in Poland - it is located at 908 m above sea level. Until now, the highest situated known structure of this type was the earthwork under the top of Mt. Jeleniec (902 m above sea level) in the Sudetes.

"The earthwork is covered with later fortifications, mainly from the Second World War, which made proper identification difficult" - noted Dr. Sadowski.

Based on the publication by historian Wacław Mejbaum (1887 - 1948), the scientists assume that the troops of Prince Martin Lubomirski in the strength of several hundred soldiers were stationed in the recently identified fortifications. In future research, the researchers will try to confirm this information.