Holy Smoke! Kielce Uni Inventor is On Fire with his Acoustic Fire Extinguisher 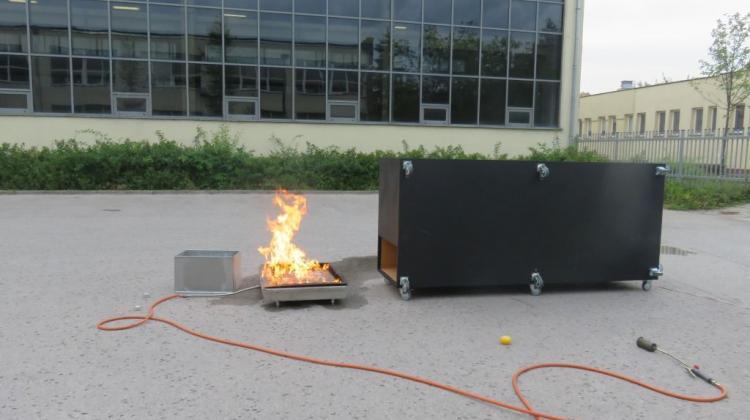 An acoustic fire extinguisher which uses sound waves to put out blazes “without damaging the extinguished object like water or extinguishing powders do” has been developed at the Kielce University of Technology,

Although water, foam and powder are normally used to extinguish fires, experts point out that despite their effectiveness, they often destroy or at least dirty the extinguished objects. In addition, fire extinguishers have a limited operating time, usually a dozen or so seconds.

The brains behind the invention, Dr. Jacek Wilk-Jakubowski, said: “The advantages of the new technology include lower operating and extinguishing costs than in the case of traditional methods based on consumable extinguishing media, non-invasive operation (acoustic waves are not a chemical product), no need for regular pressure tests that are obligatory for traditional fire extinguishers, and unlimited operation time compared to typical fire extinguishers.”

Another advantage is that the device, which is operated remotely, extinguishes the flame from a distance of almost two meters.

The prototypes were tested on liquid and gas fires in an open area, and the extinguishing tests were successful.

From the outside, it resembles a fairly large box with a hole in one of its edges - this is where the sound directed at the source of the fire comes from. In addition to the waveguide, the equipment includes a generator, a modulator, an amplifier, materials absorbing harmful sounds, acoustic panels and interference screens that (depending on the design) can have a paraboloid shape, which focuses acoustic waves on the source of the flame occurs

The device extinguishes the flame with a 17.25 hertz sound, which resembles a drone.

Dr. Wilk-Jakubowski said: “Our findings show that the lower the frequency, the better the results achieved when extinguishing a flame.”

The device uses an acoustic wave that increases the movement of air at the edges of the flames.

As a result, the deflected flames burst into parts and stop interacting due to lack of oxygen.

At the same time, the acoustic field causes more intense evaporation of the fuel, which lowers the temperature, because the same amount of heat is distributed over a larger area.

Wilk-Jakubowski now hopes that following conversations with firefighters his device can be used indoors as a built-in element of building fire protection systems and replace fire sprinklers.