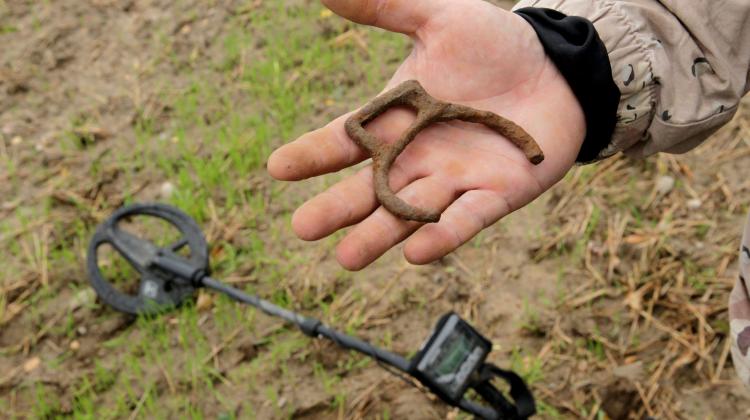 Teutonic seal, which could be a be part of the equipment of the battle chapel, and Prussian spearheads have been discovered by scientists during archaeological excavations in the Fields of Grunwald. After conservation, the approx. 400 discovered items will be shown to the public.

In the first half of September, several dozen scientists and detectorists participated in international archaeological research at Grunwald. For the fourth year in a row, researchers conducted a search to accurately locate the 1410 battlefield.

Director of the Battle of Grunwald Museum Dr. Szymon Drej, summarizing this year\'s research, told PAP that it proved to be the most effective to date in terms of the number of objects and their historical value.

About 400 items have been discovered, of which about 300 are related to the Battle of Grunwald. Last year, for example, 22 arrowheads and spearheads were found, and this year\'s result is 87.

"This is a large number. There were also 2 spearheads. This is a very interesting find, confirmed in written materials. Some of the Teutonic Knights took over long spears from the Prussian tribes. The heavy knights used lances, but some of the Teutonic Knights used Prussian long spears because they were lighter, shorter, they could be pushed and not just used to attack straight ahead" - emphasised director Drej.

Head researcher, archaeologist Dr. Piotr Nowakowski added that the most surprising item found near the battle chapel was a seal with the image of a pelican, feeding blood to chicks in the nest.

"The artefacts is more likely connected with the chapel and the liturgy than with the battle itself. It appears to come from the 16th-17th century, but accurate dating will be known after consultation with art historians" - he explained.

The purpose of the seal is also unknown. "It is certainly not a heraldic seal, there is no legend, only the image itself. Pelican is generally a symbol of the Eucharist - the body of Christ. I have found the information that in the 19th century in Italy there was a custom of sealing the altar of repose to which consecrated Eucharistic hosts were moved during the Easter Triduum. That hypothesis would fit, a seal with a pelican symbolizing the sacrifice of Christ would seal the place where the hosts were kept" - explained the scientist.

Participants in the search emphasise that the seal with the pelican is an important find, because an analogous image is located in Malbork, above the well in the courtyard of the Teutonic castle.

According to the researchers, archaeological research in the Fields of Grunwald helps uncover the history and the course of the greatest battle of medieval Europe.

"We continue to expand the search area. So far, we have searched about 120 hectares with detectors, which leaves about 500 hectares of land. Even if we do not find anything in the designated plot, we narrow down the area for further search. To make research results more reliable, a georadar survey should be introduced, but nevertheless the search so far is also a clue" - concluded Dr. Nowakowski.

The artefacts will be transferred to a conservation lab where they will undergo cleaning and conservation. They will be on display during next year\'s Museum Night.