Physicist: The recent observations of gravitational waves usher a new era in astronomy 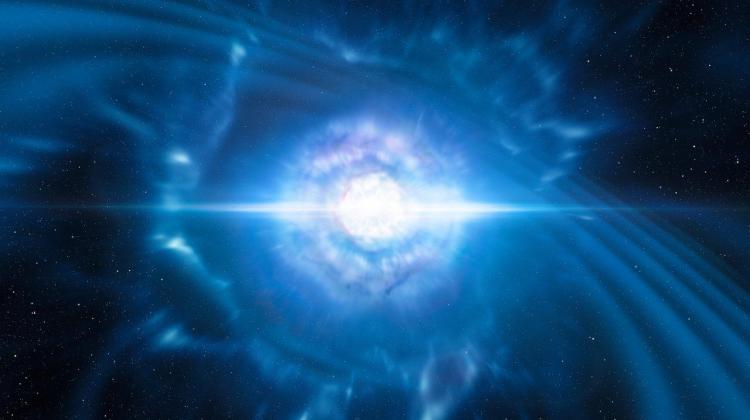 Physicists for the first time observed gravitational waves, gamma-ray bursts, a and light flare originating from the same phenomenon. "This is the beginning of a new era in astronomy" - told PAP Prof. Tomasz Bulik, involved in research.

The researchers announced the discovery on Monday at press conferences held in parallel at various scientific centres around the world, including Warsaw.

Researchers estimate that gravitational waves propagate at the same speed as light. So if a great cosmic event generates a gravitational wave and a light wave, they should reach the observer roughly at the similar time. And that was exactly what researchers have just observed for the first time.

Scientists have recorded electromagnetic waves and gravitational waves from the same event - a collision of neutron stars.

Researchers have observed the whole sequence of events. These were: gravitational waves accompanying the merging of two neutron stars, a gamma flash (less than 2 seconds after stars merging), and then (11 hours later) a flash of light - the so-called kilonova, which could be observed for two weeks.

Such observations would not have been possible without teams from all over the world with different detectors and telescopes joining forces. Over 70 observatories around the world participated in the observations (including space observatories). Polish research groups have also contributed to the discovery.

"This is the beginning of a new era in astronomy when we can observe the Universe with both gravitational waves and electromagnetic waves - light, radio, gamma, x-ray. We can now combine these observations and look at these phenomena comprehensively, not just randomly (...) This is more or less the same kind of step as the transition from a silent movie to a movie with soundtrack. We have another dimension, a new sense for exploring the Universe" - told PAP one of the researchers, Prof. Tomasz Bulik from the Astronomical Observatory of the University of Warsaw.

Professor Andrzej Królak from the Institute of Mathematics of the Polish Academy of Sciences and the National Centre for Nuclear Research, head of the Polish group Virgo-Polgraw that also participated in the research, remarked: "A new gravitational wave signal was registered - the merging of two neutron stars. The source of previously registered gravitational waves were merging black holes". He explained that until now, merging of neutron stars had never been observed.

"Neutron stars have radius on the order of 10 kilometres, they are very dense, their mass is as much as the mass of the Sun" - described in an interview with PAP Prof. Krzysztof Belczyński from the Nicolaus Copernicus Astronomical Center in Warsaw. Earlier at the conference, the scientist said that the collision of neutron stars is very violent and about 1 percent of the masses of these stars is ejected into space. "This ejected very dense matter is the place where the heaviest elements known to us are formed" - he said and added that he and his colleagues from Poland, Hungary and the United States had managed to estimate what had formed in such a collision. "We came up with the conclusion that in this collision a huge amount of gold had been created, corresponding to the mass of 30 planets such as Earth. Imagine 30 Earths made of pure gold ... This is probably one of the most valuable discoveries I have heard of!" - he joked.

According to Prof. Belczyński, if the scientists involved in the study of gravitational waves did not get a Nobel Prize this year (and they did less than a week ago, in physics), then this discovery would surely win a Nobel next year. The researcher explained that such research would be the basis of many future discoveries concerning, among other things, the life of stars.

Prof. Królak noted that this discovery would also shed light on the origin of gamma-ray bursts. "Nearly every day we watch gamma-ray bursts coming from outer space. This radiation is very, very energetic," he explained. He said that the first gamma-ray bursts were accidentally detected in the 1960s by spy satellites that checked whether the USSR conducted nuclear tests. "Over time, it has been understood that gamma-ray bursts come from space" - added Królak.

Prof. Bulik explained: "We have seen many gamma-ray bursts that we thought were coming from neutron stars merging, but now we have the confirmation - we are sure that\'s really it!". (PAP)