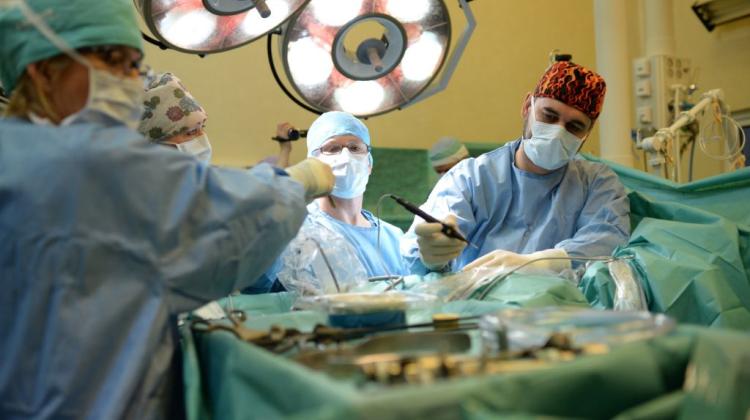 Poland\'s first kidney paired donation transplant was been performed last Tuesday by specialists at the Department of General and Transplant Surgery, University Hospital of the Infant Jesus in Warsaw.

Kidneys from two donors were collected using retroperitoneoscopy, minimally invasive method of body cavities endoscopy using a camera. Prof. Kwiatkowski explained in an interview with PAP that this method is technically difficult, but safer for the patient. It allows direct access to organs such as the kidneys, adrenal glands, ureters and prostate without opening the peritoneal cavity. This minimizes the risk of accidental injury of peritoneal cavity organs, and the healing process is faster.

Prof. Chmura said that the surgery was performed in two couples, in which men wanted to donate kidneys to their partners, but they could not do that because of incompatible blood type or the positive crossmatch, which showed that transplant between them could not be performed. One of them has a blood type 0, and his partner - type A. The second couple had the same blood types, but the opposite arrangement: recipient with blood type A and donor - type 0.

"A person with blood type A usually can receive a kidney from a partner that has type 0, but only when crossmatch is negative, i.e. that the recipient does not produce antibodies against the donor’s tissues. However, in the case of the second couple, despite compatible blood it turned out that the recipient produced antibodies against partner’s tissue. Paired transplant was necessary" - emphasized the coordinator Aleksandra Tomaszek.

Both couples had to exchange kidneys to qualify for transplantation from unrelated living donors. The law in Poland allows such procedures. According to Art. 13 of the Transplantation Act, however, they must be justified by "special personal reasons".

"Paired transplants are performed when the potential recipients have people who are willing to be kidney donors among their relatives, but for immune reasons (blood type incompatibility, anti HLA in the recipient - ed. PAP) they can not be a donor for the relative" - told PAP Prof. Artur Kwiatkowski.

The donor can donate a kidney to a recipient from another pair in exchange for kidney transplantation from living donor from that pair that is in a similar situation. A good selection of comparable pairs differing only immunologically requires as many candidates as possible for this procedure, meaning central coordination.

Dr. Rafał Kieszek said that the Warsaw Department of General Surgery and Transplant of the Hospital of the Infant Jesus was preparing for three years for the first paired transplant. Until now, 30 couples interested in such procedures reported to the Warsaw clinic. "We can also carry out more exchange transplants from living donors, for example, while the participation of three pairs" - added Prof. Chmura.

In the United States, where such transplants have been performed for many years, exchange transplants are carried out simultaneously even in several dozen pairs. However, this requires the coordination of many transplant centres. In Europe, these operations have not yet been carried out on such a large scale. The largest centre performing this type of procedures is in Rotterdam.

Polish transplant specialists want to cooperate with the Czech Republic, where more than 70 pairs have already benefited from exchange transplants. Kidneys from living donors can be sent by air.

Prof. Chmura believes that exchange transplants from unrelated living donors are the future of transplantation, because they allow to better match donors and recipients for antigen compliance. "Years ago, it seemed that the risk of organ rejection would be significantly reduced by new immunosuppressive drugs. Today we know that the best possible matching of donors and recipients is still very important" - he said.

It\'s a great opportunity, especially for people waiting for a transplant, who do not have any relative who could give them a kidney. Couples interested in exchange transplantation may report to the Warsaw clinic coordinator, Aleksandra Tomaszek.

The Department of General and Transplant Surgery, University Hospital of the Infant Jesus in Warsaw performs 40 percent of all transplants from living donors in Poland. 55 such procedures were performed in Poland in 2014.