Poles and Germans on the podium of military robotics competition 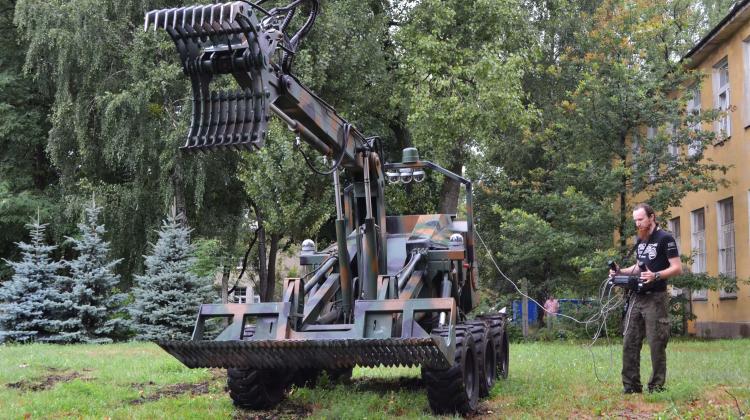 Military University of Technology testing grounds were the arena of international military robot competition M-ELROB 2014. Only Polish and German teams were able to win places on the podium in four competitions.

Our country was represented by teams from the Military University of Technology, the National Institute for Automation and Measurements (Państwowy Instytut Automatyki i Pomiarów, PIAP) and companies Robotics Inventions and WB Electronics.

"We are in no way inferior in technical ideas related to robotics and automation to other centres in the world. Polish robots participate in European programs, Polish companies supply not only our army with the best technology. That is why this year\'s M-ELROB competition, previously the domain of Germany, has been organized in Poland" - said the rector of the Military University of Technology Brig. Prof. Zygmunt Mierczyk during military robotics workshops and competition M-ELROB 2014.

The competition, which took place on 23-27 June, was attended by six Polish teams, including three teams from the Faculty of Mechanical Engineering, Military University of Technology. Robot builders competed for five days, unmanned land platforms were tested in various combat and civil scenarios. Terrain conditions offered by the Military University of Technology campus, the largest university campus in Warsaw, covering about 200 hectares of forest in the buffer zone of the Kampinos Forest, allowed the jury to prepare comprehensive tasks.

"All the scenarios, and the organizers have prepared as many as five, show real situations on the battlefield, such as the ones we faced in Iraq or Afghanistan. The tasks involve transportation of cargo between camps, remote search and neutralization of improvised buried explosive devices, rescuing the wounded on the battlefield, day-night reconnaissance, etc." - described the M-ELROB spokesman Jerzy Markowski.

He emphasised that the military is leading in developing new technologies in the field of robotics and automation. While unmanned land platforms taking part in the competition are not armed and do not have an autonomous artificial intelligence, they are already at the stage of development that in the near future will allow them to become an integral part of the equipment of ground troops.

16 teams from Germany, Switzerland, Finland, Russia, Canada and Poland competed in M-ELROB 2014. In addition to the Poles, representatives of Germany won places on the podium. Robots Garm, PackBot EOD 510 and Telemax dominated the competition "Search and rescue", Telemax and PackBot EOD 510 won first and second place in the reconnaissance and surveillance in non-urban and urban environments. (PAP)