Moveable Footbridge to Help With Transport and Pedestrian Traffic 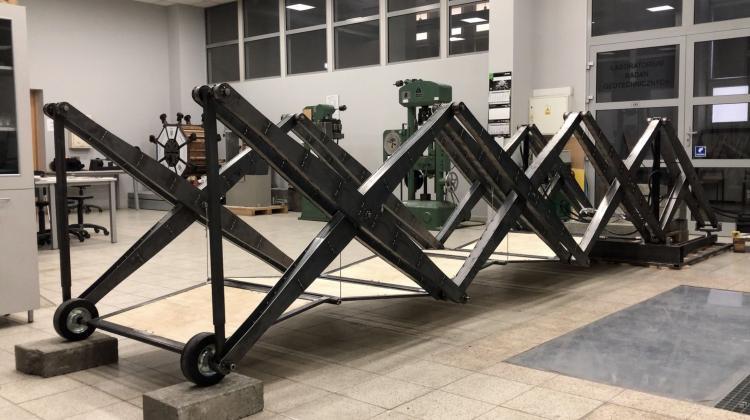 A bridge that can be unfolded has been designed by students at the AGH University of Science and Technology (AGH-UST) in Krakow.

The scissor mechanism footbridge, which is an unusual combination of a movable mechanism with a usually permanent structure, can be used as a mobile crossing for either pedestrians or vehicles over obstacles and serve as a temporary bridge.

Weighing almost a ton, the footbridge is 7 m long, about 2 m wide and capable of supporting a load of up to 500 kg. It takes about 20 seconds to deploy.

The model consists of six wooden segments and 24 steel arms moved by two hydraulic cylinders. It is also possible to increase the number of elements allowing it to expand and change its use depending on the needs.

In a press release, AGH-UST said: “The footbridge has many applications. In the future, an extended and improved model could be used as a pedestrian crossing in unusual places, for example in the place of damaged bridges and passages, in the vicinity of rivers or coastal quays.

“The bridge could be successfully introduced in a botanical garden, protected areas or national parks, where the construction of permanent structures is not possible. The solution designed by students may be an alternative crossing when the height difference between the obstacle and the land is too small to build a permanent bridge, or when its construction is not viable.

“The presence of the footbridge does not hinder the movement of ships or other vessels.”

The project was created by students of the Faculty of Mining and Geoengineering: Adrianna Pustelnik, Oskar Mencel and Jonasz Stępień.

The creators of the footbridge are members of the Structural Mechanics Science Club `Aksjator`. The project supervisors were Dr. Henryk Ciurej and Dr. Michał Betlej from the Faculty of Mining and Geoengineering. The design and implementation work on the model took 10 months.

The model is part of the current trend of introducing movement into building structures and a great example of combining several areas: construction, mechanics and architecture.

AGH-UST said that this is yet another movable footbridge of this type created by the Science Club `Aksjator`. The previous footbridge, built in 2018, was based on the Rolling Bridge in London.