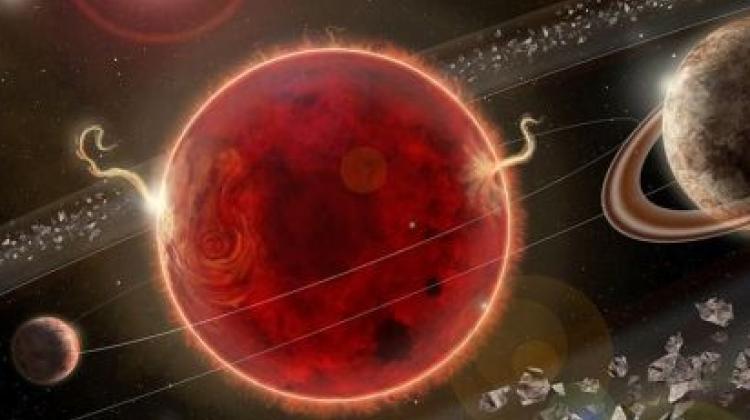 An artist’s illustration of the Proxima Centauri planetary system, in which the planet Proxima c is located. Credit: Lorenzo Santinelli

The closest star to the Sun may host a second planet.

Just 4.2 light years away, Proxima Centauri is our nearest star with a planet named Proxima b.

Now, new research carried out by an international team of astronomers including from Poland, says there could be a second “low-mass candidate planet” or a super-Earth, the term for a planet with a mass larger than Earth but a lot smaller than the ice giant Neptune.

Named Proxima c, the potential second planet is almost six times bigger than Earth with temperatures reaching little more than minus 230 Celsius and it completes its orbit around its star in about five years at a distance of 220 million km.

The discovery by the team led by astronomer Mario Damasso and including Professor Grzegorz Pojmański from the Astronomical Observatory of the University of Warsaw, was published in the prestigious science journal Science Advances.

An artist’s illustration of the Proxima Centauri planetary system, in which the planet Proxima c is located. Credit: Lorenzo Santinelli

The team of scientists expects that the final verification and confirmation of the existence of Proxima c will be possible based on astrometric observations currently carried out by the Gaia satellite.

The planet`s presence is evidenced by small changes in the star`s speed of just 1.2 m/s, measured during many years of observations with HARPS and UVES spectrographs at the European Southern Observatory (ESO) in Chile.

Photometric observations obtained as part of the ASAS project, conducted since 1997 by Professor Pojmański, were used to verify the discovery.

These data show both changes in Proxima`s brightness associated with star rotation and its chromospheric activity. However, the periods of these changes are different from the orbital period of the planet.

The first planet in the Proxima Centauri system was discovered in 2016, also in cooperation with astronomers from the Astronomical Observatory of the University of Warsaw.