A Year of Science in Poland and the World 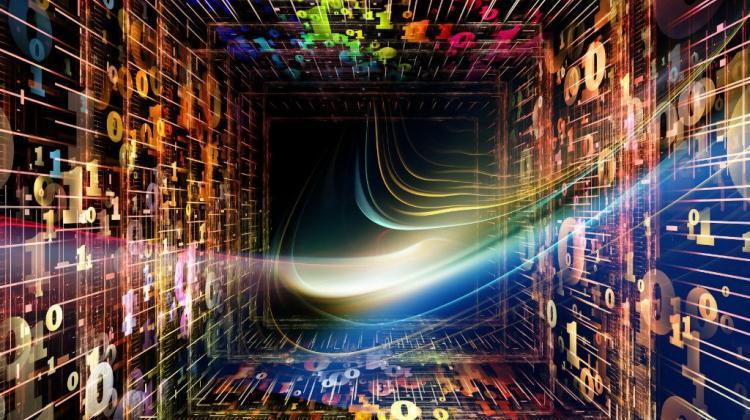 From the first photo of a black hole, the 3D printing of a bionic pancreas, to the discovery of the bones of a massive sea predator - we look back at some of 2019’s most extraordinary moments in science.

- The Chinese space probe Chang`e 4 landed on the Moon`s hemisphere which is invisible from Earth. It was the first landing of a vehicle sent from Earth on the virtually unexplored hemisphere.

- In the Ice Age, inhabitants of today`s Europe hunted mammoths with javelins. The first direct evidence of this was discovered in Kraków near the Kościuszko Mound. A fragment of a flint arrowhead from 25,000 years ago was found stuck in a mammoth rib.

- The diaphragm plays a previously unknown role in the body: it helps us maintain body balance, scientists from Silesia discovered. Their experiment shows that the greater the thickness and mobility of this muscle during breathing, the better the person`s balance.

- CERN announced its plans to build the Future Circular Collider, an accelerator four times larger and many times more powerful than the Large Hadron Collider. The new collider may enable the discovery of currently unknown types of elementary particles.

- President Andrzej Duda submitted a constitutional complaint to the Constitutional Tribunal concerning of the provisions of the so-called Law 2.0, the Law on Higher Education and Science. The contested Art. 121a introduces, for the incumbent judge of the Constitutional Tribunal, the Supreme Court or the Administrative Court, including retired judges, the right to lifetime employment at the university, regardless of the result of the employee evaluation. This provision was proposed during work on the Law 2.0 in the Senate. The president`s complaint was supported by the Minister of Science, Jarosław Gowin.

- Scientists at the Universitat Autonoma de Barcelona identified over 800 new places in the human genome that are potentially relevant to human evolutionary adaptation. Earlier, 1,986 such places were identified in the genome. They provide knowledge that allows to understand what determined the specificity of man or certain human populations in the course of evolution.

- Professor Krzysztof Birkenmajer died at 89. He was an eminent geologist, author of hundreds of scientific papers, participant of 23 scientific expeditions to Spitsbergen, Antarctica and Greenland. Taking advantage of the privilege of explorers, he introduced over 200 Polish geographical names in Antarctica alone.

- Neanderthals moved in an upright position, like today`s people, scientists proved based on the virtual reconstruction of the pelvis and spine of a Neanderthal, whose skeleton was discovered in France. A 3D computer model of the Neanderthal spine and pelvis was developed by a team of Swiss and American scientists.

- Elon Musk`s SpaceX launched a Falcon 9 rocket that carried a launching crew-capable version of the Dragon capsule into the orbit. The crewless capsule, which contained a mannequin and 200 kg of cargo docked on the International Space Station. Placed on one of the crew seats, a natural mannequin with sensors on its head, neck and spine allowed scientists to study the impact of flight on the human body.

- The New York Kosciuszko Foundation together with the Jagiellonian University established the Frank Wilczek Award to the amount of 12,000 US dollars for young Polish scientists with significant achievements in physics, astronomy or in related fields. The distinction will be awarded every two years.

- The world`s first bionic pancreas with blood vessels was 3D printed by researchers from the Foundation of Research and Science Development under the supervision of Dr. Michał Wszoła. The pancreas is not intended to perform an exocrine function like a real pancreas. It is assumed that in the future it may restore insulin production in the diabetic`s body. Currently, this is only possible by injecting this hormone with a suitable insulin pump.

- The first photo of a black hole was presented by astronomers from the Event Horizon Telescope research team. It was taken by eight telescopes that formed a "virtual telescope" the size of an Earth. The picture shows a black hole at the centre of the Messier 87 galaxy, 55 million light-years from Earth. Polish scientists were involved in the research.

- The rector of the Gdańsk University of Technology, Professor Jacek Namieśnik died at 69. He specialized in analytical and environmental chemistry. He had been the rector since 2016. He was replaced by Professor Krzysztof Wilde.

- Two Polish satellites were launched from the NASA centre on Wallops island in the US: KRAKsat built by students of the AGH University of Science and Technology and the Jagiellonian University, and Światowid - the first Polish commercial and observation satellite.

- After decades of searching, astronomers detected helium hydride in space - the first type of molecule that formed in the universe in its early days. It was found in our galaxy by the NASA`s SOFIA Observatory.

- In the Eastern Desert in Sudan, Polish archaeologists from the Institute of Archaeology of the University of Wrocław discovered traces of the presence of Homo erectus, dating back 500,000 years. According to the discoverers, this is evidence of the existence of a hitherto unknown migration route of this species outside the continent.

- The American company SpaceX placed 60 small satellites in orbit with the purpose of providing high-speed internet access services. This is the first batch of the total of 1,800 devices that Elon Musk wants to put in space.

- One of the five largest mega floods in the history of the world occurred in the Suwałki region several thousand years ago, scientists determined. Its effects can be seen to this day. The groundbreaking discovery of scientists from the Nicolaus Copernicus University changes the view of the landscape of Central Europe and explains the origins of Lake Hańcza.

- The US National Aeronautics and Space Administration (NASA) announced that it would allow private persons to spend one month for a charge at the International Space Station (ISS). NASA intends to approve two commercial trips to the ISS each year at most.

- Dozens of mummies dating back approx. 2,000 years were discovered by Polish archaeologists during excavations close to the world`s oldest pyramid at the necropolis in Saqqara, northern Egypt. Most mummies were laid directly in the sand.

- The Impuls team from the Kielce University of Technology won the international Mars rover competition - the University Rover Challenge in the United States.

- The rector of the Opole University of Technology, Professor Marek Tukiendorf, died at 55. He had managed the university since 2012. He was replaced by Professor Marcin Lorenc.

- Researchers including Polish archaeologists discovered traces of human presence in the Hučava Cave in the Belianske Tatras from several thousand years ago. These are stone blades used by hunters. Until now, no prehistoric items have been found in any of the Tatra caves.

- A unique 3D map of the Milky Way was presented in the prestigious journal Science by scientists from the Astronomical Observatory of the University of Warsaw working in the Optical Gravitational Lensing Experiment (OGLE) project. The map provides new information on the history of our galaxy.

- An unusual ceremony took place at the Ok volcano near the capital of Iceland, Reykjavik. The authorities of the country officially memorialised the disappearance of the Okjökull glacier and unveiled the plaque, which is a call for future generations.

- Dr. Michał R. Szymański from Gdańsk and Dr. Rafał Banka from Kraków are Polish winners of the prestigious Starting Grant of the European Research Council (ERC). They are in the group of over 400 awarded scientists.

- This year`s Nobel Prize in Physiology or Medicine was awarded to William G. Kaelin Jr, Sir Peter J. Ratcliffe and Gregg L. Semenza "for their discoveries of how cells sense and adapt to oxygen availability". In the field of physics, the 2019 Nobel Prize winners were James Peebles, Michel Mayor and Didier Queloz. They were awarded "for contributions to our understanding of the evolution of the universe and Earth’s place in the cosmos" and "for the discovery of an exoplanet orbiting a solar-type star". John B. Goodenough, M. Stanley Whittingham and Akira Yoshino won the Nobel Prize in Chemistry. Researchers were recognized for their contributions to the development of the lithium-ion battery.

- Soviet cosmonaut Alexei Leonov died at 85. He was the first human to conduct a spacewalk. Leonov`s spacewalk during the Voskhod 2 mission lasted only 12 minutes. The cosmonaut moved away from the ship to a distance of 5 meters, connected by a tether with a telephone cable.

- Bones of pliosaurs, a huge marine predator living in Jura, i.e. ca. 150 million years ago, were discovered by palaeontologists near Iłża (Mazowieckie). The remains of these largest Jurassic sea predators have only been discovered in a few places in Europe.

- The White House announced that Professor Dorota Grejner-Brzezińska would sit on the US presidential Council of Advisors for Science and Technology. The Polish scholar specializes in geomatic engineering, including GPS algorithms and mobile mapping.

- Photons - particles with no mass, moving at the speed of light - can be tricked to "stop" and behave like completely different particles, ones having mass and reacting to magnetic field: electrons. A team of Polish scientists demonstrated this in a publication in Science.

- The Plague of Justinian , an epidemic that afflicted the Byzantine Empire in the early 6th century, did not decimate its population contrary to popular opinion among historians. Interdisciplinary research has shown that its scale was much smaller.