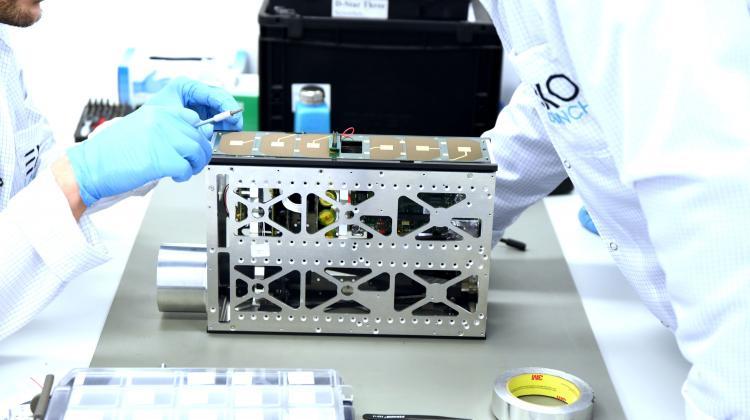 A high-res micro-satellite capable of observing the Earth for geological, agricultural and mining research as well as climate change is being developed in Wrocław.

The 34cm-long ScanSAT satellite from Wrocław-based company Scanway in cooperation with the National Centre for Research and Development, is based on the universal CubeSat standard, and will use a wide optical spectrum telescope, including infrared to provide multispectral images to detect such things as water resources as well as natural resources in mining.

Mikołaj Podgórski from Scanway said: "Despite its small size, in many respects ScanSAT will match the performance of large satellites. Its biggest advantage is the precise, miniaturized optical system, resistant to temperature changes. ScanSAT will be equipped with a highly advanced multispectral sensor, integrated with a proprietary Ritchey-Chretien optical telescope.”

He added that ScanSAT will have the advantages of large satellites and at the same time minimize or even reduce the disadvantages of CubeSats. A laser communication experiment will be carried out from its board and its high resolution and multispectral imaging capability will have a mass below 20 kg.

Optical systems design specialist at Scaway, Agnieszka Przybylska, said: "Our goal was to achieve a resolution below 5m/px. We focused on a telescope using the Ritchey-Chretien optical system, built exclusively from mirrors. Thanks to this we will avoid such problems as chromatic and spherical aberration, i.e. image deformation, and we will obtain a wide field of view and a very good image quality and resolution.”

The company says it has also developed innovative, proprietary test stations and equipment allowing for proper calibration and testing of the telescope system before sending it in orbit to make it resistant to the massive shocks, huge temperature fluctuations and increased radiation it will be exposed to.

Integration tests of all micro-satellite components began in November. They are conducted in cooperation with the Berlin start-up German Orbital Systems. The integrated device will now undergo environmental tests. The construction of the engineering model is expected to be completed in March 2020.

The project "ScanSAT - satellite and aerial observation platform for obtaining geo-information in real time with high precision and in a very wide electromagnetic band" received over PLN 2.5 million in European funding.

The launch of the satellite is scheduled at the turn of 2021.