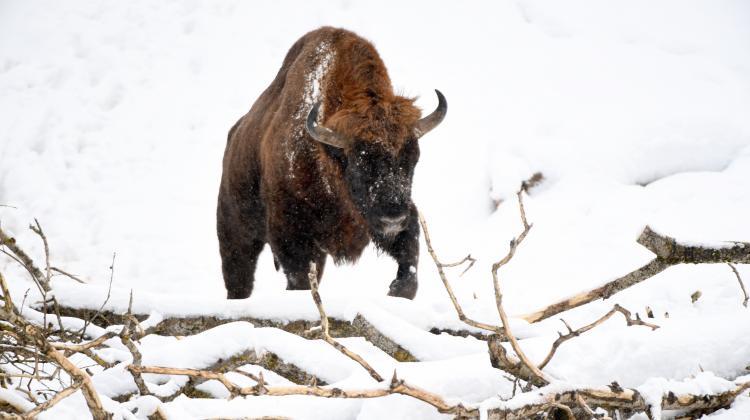 A symbolic monument of nature protection and a natural element of the environment or a special care animal and a species susceptible to threats? Sociologist from the Polish Academy of Sciences investigated how the way of thinking about the European bison affects the management practices for this species.

The protection of European bison in Poland stirred a lot of emotions in recent years. Scientists, NGOs and foresters argued about the species management methods, including first and foremost the need for and scale of reducing the bison population, as reported by the media. To better understand the causes and context of these disputes, Dr. Krzysztof Niedziałkowski from the Institute of Philosophy and Sociology of the Polish Academy of Sciences analysed the history of management of this species. His conclusions were published in Environmental Sociology.

The way of thinking about this species had a decisive impact on European bison management practices, the scientist argues.

"Until the end of the 19th century, European bison was perceived as a relic of the past, a natural oddity doomed to extinction in connection with the development of civilization", the author of the study reports in a press release sent to PAP.

He reminds that after killing the last bison living in the wild in 1919, Polish zoologist Jan Sztolcman presented a vision of saving the remaining bison living in zoos from extinction. It became the basis for the restitution of the species in the following decades, initially as part of closed breeding, and then, since the release of the first animals in the Białowieża Forest in 1952, also in the wild. Since the mid-1970s, when the state authorities decided that the European bison population in Poland was large enough and should be controlled by means of culling, there was a tension between the image of the European bison and the practice of its management.

"On the one hand, the species was perceived as a symbolic monument of nature protection, almost miraculously saved from extermination, one that would constantly require human care due to the historical population collapse, limited gene pool and the changing environment. On the other hand, some animals were regularly culled, also commercially. In the 1990s, this tension began to translate into a reduction by the Ministry of the Environment of the culling plan proposed by the Białowieża National Park, and then to stricter conditions of culling. The number of bison in the Białowieża Forest began to grow", he concludes.

The author of the article in Environmental Sociology suggests that a new way of thinking about European bison emerged in the early 2000s. Scientists specializing in biology and ecology of wild animals began to postulate the re-naturalization of European bison within existing ecosystems. In their opinion, it should not be treated as a special care animal, but as a natural element of the natural environment that is able to function without human assistance.

Moreover, as Dr. Niedziałkowski writes, these scientists perceived limiting traditional species management practices, such as winter feeding, as a way to increase the role of natural selection, and thus a way to ensure the species safety in the face of new external threats related to, for example, climate change and new diseases. They called for culling reduction and enabling bison to naturally migrate beyond the forest areas assigned to it so far. They also emphasized the constant need to learn about the species in the face of new, hard to predict changes in the environment. Natural scientists tried to implement their vision in 2007-2010 by carrying out a bison protection project in the Białowieża Forest and its surroundings, for which they obtained EU funding. The experience from this project has allowed to prepare assumptions for a new, adaptive model of European bison population management based on constant monitoring and response based on the results of ongoing research.

Dr. Krzysztof Niedziałkowski notes that the new vision of the future of the bison has met with resistance from some European bison protection experts, especially those specializing in animal husbandry and veterinary medicine. They represented the traditional perception of the bison as a particularly vulnerable species due to its difficult history and very limited gene pool. In their opinion, to ensure the safety of the European bison, intensive human activities are required, based on accumulated knowledge that is now sufficient to successfully achieve the intended goals.

According to those experts, the existing bison protection practices have proven effective and not only should not be abandoned, they should be expanded. Proponents of this view have presented a new vision of the future of the species: the creation of numerous wild herds and closed breeding herds in Poland, which will be closely monitored by forest services caring for the condition of the animals and involved in activities to enrich the animal gene pool. The costs of these activities would be partly financed by commercial European bison hunting. Supporters of the traditional European bison management model have also obtained funding from European funds for some of the planned activities.

The author of the analysis notes that ultimately there was no change in the European bison management model, which was determined by political factors rather than scientific discussion. After the change of government in 2015, the composition of the State Council for Nature Conservation changed and the scientists advocating the "re-naturalization" of the European bison were replaced by supporters of traditional practices. At the same time, the public opinion became interested in the discussion about the legitimacy of hunting, which translated into numerous protests against commercial bison hunting, and - as a result - the decision of the Director General of State Forests to stop such hunting in April 2018.

According to the sociologist, the European bison dispute reflects deeper differences in the perception of relations between man and nature, which are revealed, among other things, in conflicts around the Białowieża Forest or the culling of wild boars in response to African swine fever. "In the face of increasingly visible changes related to the climate crisis, the author believes that the subject of appropriate responses to disruptions in nature and the vision of future ecosystems will be a topic of numerous discussions among scientists and the subject of public debate".

Dr. Niedziałkowski carried out his research under the National Science Centre grant.