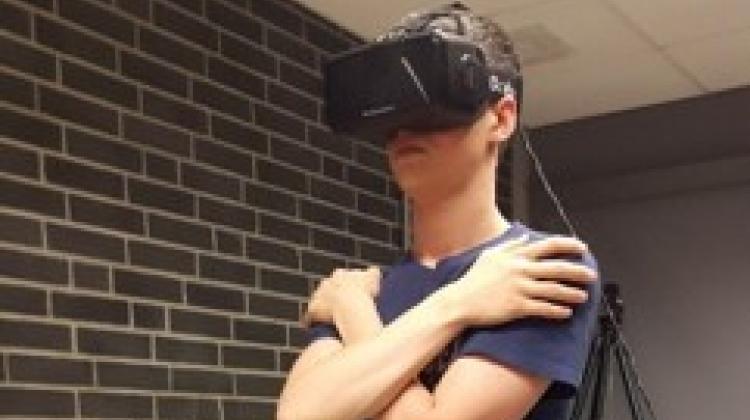 Scientists from the Silesian University of Technology together with physiotherapists are working on a VR-based method of quick detection of balance problems. In the future, the results of their work will help to accelerate detection of ENT diseases and nervous system disorders.

Traditionally, balance tests are based on measurements of the patient`s body`s behaviour on special platforms, on which patients usually stand for 30 seconds with eyes open or closed. The diagnosis is based on the analysis of measured values describing body movement, but it does not always give a full picture of what is happening with the patient`s balance organ.

Researchers from the Silesian University of Technology together with physiotherapists are working on a new, virtual reality-based method of quick detection of problems with balance.

"In our research, we use virtual reality to provoke certain behaviours of the patient in the so-called sensory stimulus conflict", says Prof. Jacek Jurkojć from the Faculty of Biomedical Engineering of the Silesian University of Technology.

"We introduce an inconsistency between the stimuli received by the patient`s various senses. In other words, thanks to the use of virtual reality, the patient sees something different than the body feels. Our tests allow to check how the patient reacts to such a discrepancy (...). The analysis shows to what extent we rely on what we feel, see or what is registered by the vestibular organ when maintaining balance, and determine whether the body makes additional movements, indicating balance disorder", the scientist adds.

The next stage of research will be using these tests in the diagnosis of balance disorders. "Together with physiotherapists, we are developing a methodology for diagnostic tests that will quickly detect balance disorders at their very early stages, when they are not detected with standard methods", says Prof. Jurkojć.

Such analyses will allow to quickly detect diseases, in which patients have problems with balance. These include ENT diseases, nervous system disorders (for example multiple sclerosis), or systemic diseases (such as hypertension).

Dr. Aleksandra Ziembińska-Buczyńska, a professor at the Silesian University of Technology, is a microbiologist. She is the winner of the 2018 Popularizer of Science competition co-organized by PAP - Science in Poland and the Ministry of Science and Higher Education. Since 2017, she is the director of the Science Popularization Center of the Silesian University of Technology. In 2015, she took third place in the third Polish edition of FameLab. She hosted the show "Wynalazcy przyszłości" ("Inventors of the Future") on CANAL+ DISCOVERY, where she presented Polish inventions and discoveries expected to change our world in the near future.

The article is one of the results of the program Spokespersons of Science organized by the Copernicus Science Centre and the British Council Foundation. The program facilitates establishing cooperation between scientists who promote knowledge and science journalists.