Sensational discovery during the conservation of the Veit Stoss altarpiece 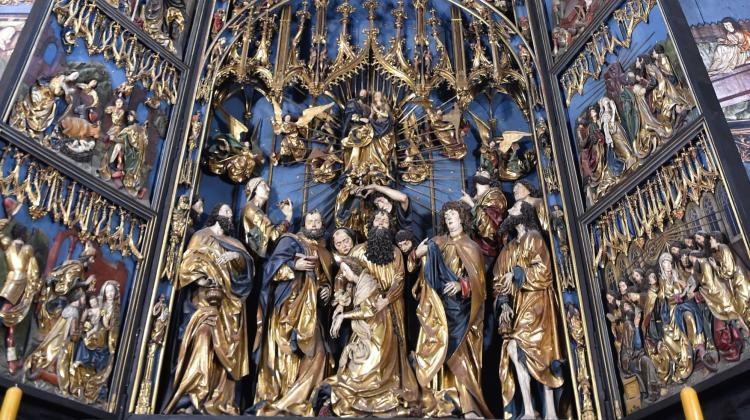 During the research and conservation works of the Veit Stoss altarpiece in St. Mary`s Basilica in Kraków, the date 1486 was found and read on the side of one of the figures - St. Jakub the apostle, supporting the sleeping Mary.

This date is three years earlier than the date of the altar consecration accepted in the literature, and has not been known to researchers of medieval art.

St. Jacob supporting the sleeping Mary is the most important, central sculpture of the Veit Stoss altarpiece. The date was discovered when removing repaints from the back of the sculpture, on the side of the apostle`s robe.

"The style of the numbers - with a characteristic four - is typical for the Gothic period. This is perfectly consistent with the technology of the sculpture and there is no doubt that the date found on the border of gilding and gilding foundations is authentic" - emphasises the research and conservation project leader Dr. Jaroslaw Adamowicz. "Who added the date? We do not know. It was certainly someone from the team working on making the altar. An interesting fact is that it is 1486 - three years before the official date accepted in literature as the date of its consecration" - adds Adamowicz.

According to experts, this discovery opens the discussion and new possibilities for further research - mainly historical, to analyse what could be the reason for consecrating the altar three years after the most important sculpture was made. "But we are also not sure whether the altar`s panels were already finished in 1486, or perhaps work on its other parts took longer, until 1489" - Adamowicz emphasises.

Until now, there were no discoveries of writings on the altar in the form of a date, signature, inscription or marker.

"This is a great surprise, because in literature there are no mentions of inscriptions from the late Middle Ages on the altar. This date indicates that the main figures in the work of Veit Stoss were completed as early as 1486. For those working in conservation it is a thrill, because it means that they have direct contact with the work of the master and his workshop" - told PAP the parson of St. Mary`s Basilica, Fr. Dr. Dariusz Raś.

The parson emphasized the professionalism of the conservation team, who discovered the barely visible date that was overlooked during previous, numerous conservations of the altar.

The Veit Stoss altarpiece consists of the main panel with figures placed on a predella (base), movable and fixed wings decorated with reliefs and the crown. Its frame made of oak wood, backgrounds for carvings and sculptures of larch wood, and carvings, sculptures and architectural details of gilded and polychromed linden wood.

Conservation work at the altar began in September 2015 and will continue until the end of 2021. Currently, work is underway on the main scenes located in the central part: the Dormition and Assumption of the Virgin Mary. A special platform in front of the altar allows tourists visiting St. Mary`s Basilica to watch the work of conservators.

The altar crown was restored earlier and has already returned to its place. Restoration of 12 panels from the altar wings visible when the altar is closed is also completed. Conservators will work on the panels visible when the altar is open during the last stage of the project. The work is carried out by the Inter-Academy Institute of Conservation and Restoration of Works of Art of the academies of fine arts in Warsaw and Kraków (PAP)