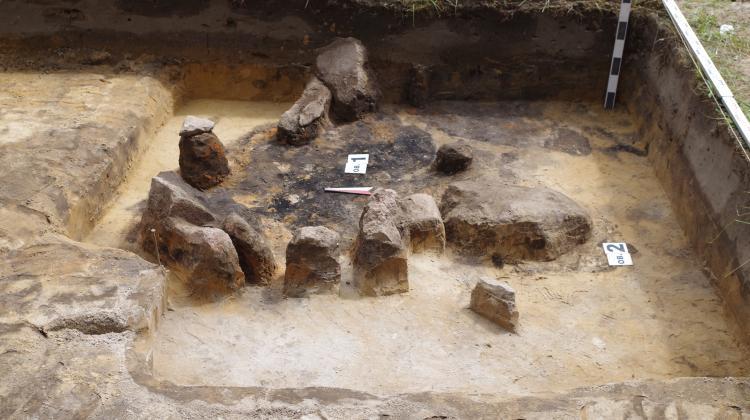 Remains of a furnace, photo by K. Niedziółka

Fireplaces, remains of furnaces, storage pits and post-pile holes, which once held up structures, were discovered by archaeologists in Sacharewo near Hajnówka in the Białowieża Forest. 2,000 years relics of the settlement were found thanks to... moles.

The discovery was made by accident when scientists were looking for a suitable place to drill geological wells to survey the local natural environment. "The forest clearing, right next to the riverbed of the Leśna River, was full of molehills. In the molehills, we noticed numerous fragments of prehistoric ceramic vessels that moles pushed up to the surface" - says Dr. Kamil Niedziółka from the Institute of Archaeology of the Cardinal Stefan Wyszyński University in Warsaw.

According to preliminary analysis, most of these fragments of vessels come from the first centuries AD. Remains of hearths, furnaces and storage pits were also found during excavations. Soil samples taken from the latter will be subject to expert analysis. Researchers will attempt to determine what was stored in them. Archaeologists also came across the remains of simple structures.

These are traces of one of the very few well-preserved prehistoric settlements discovered so far in the Białowieża Forest, says Dr. Niedziółka. He adds that archaeologists usually only discover individual fragments of ceramic vessels, without context in the form of infrastructure such as furnaces or storage pits.

Who were the people that lived in the settlement? According to Dr. Niedziółka, at first they were local communities, and from the 2nd century AD, Goths travelling to the south of Europe could also appear there.

Excavations were carried out in June and July as part of the project "Cultural and natural heritage of the Białowieża Forest", headed by Prof. Przemysław Urbańczyk from the Institute of Archaeology of the Cardinal Stefan Wyszyński University. It is financed by the National Science Centre. Several archaeological sites were excavated. Most of them were selected for research with the use of airborne laser scanning (ALS), which allowed to locate hundreds of previously unknown traces of former human activity: mounds, charcoal kilns, wood tar distilleries, outlines of old bounds. The search covered the entire Polish part of the Białowieża Forest, including the area of the National Park. (PAP)