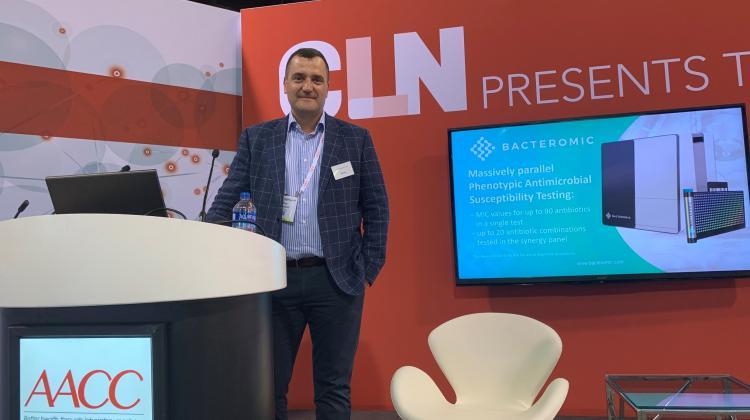 Scope Fluidics CEO Prof. Piotr Garstecki at a trade fair in the US. Photo from private archive

Polish start-up Scope Fluidics developed two innovative systems for medical diagnostics, which - as the only systems from Poland - were among the seven most groundbreaking diagnostic products in the world selected in the American Association for Clinical Chemistry (AACC) competition.

The solutions that gained recognition are the PCR ONE system for detection of nosocomial infections and BacterOMIC that allows to identify bacteria resistant to antibiotics, the Foundation for Polish Science (FNP) informed in a release.

The BacterOMIC system was also recognised by experts from the European Innovation Council (EIC), who awarded Scope Fluidics a grant worth over 1.9 million euros for its development.

AACC is the world`s largest organization of medical diagnostics specialists and the publisher of Clinical Chemistry, the most important scientific journal in this field. The solutions developed by the Polish start-up, whose co-founder and CEO is Prof. Piotr Garstecki, were awarded at the Disruptive Technology Awards 2019 and presented in the Innovation Zone during the August AACC Expo in California.

"I`ve always dreamed that at least part of what we do scientifically finds practical applications" - says Prof. Garstecki, quoted in the release. "We have a wonderful, ambitious team of well-educated specialists, we are also supported by foreign experts from the most experienced markets. When it comes to BacterOMIC, tests confirmed the possibility of analysing synergies between many pairs of antibiotics in an automated test - a key feature that distinguishes our system from the competition".

BacterOMIC is the answer to one of the biggest problems of the modern world: the decreasing effectiveness of antibiotics. Once banal, diseases are slowly becoming impossible to cure because there is not enough ammunition to defeat them. That is why today people are starting to contract tuberculosis again, why wound or urinary tract infections, pneumonia, sepsis, and even ear infections common in children are becoming increasingly difficult to treat. According to the World Health Organization estimates, drug-resistant bacteria can lead to the deaths of up to 300 million people worldwide and cause a mortality rate higher than cancer over the next 35 years.

The choice of antibiotic can be a real challenge for doctors. Often several dozen of them have to be examined, while every hour counts. Unfortunately, currently used diagnostic systems are outdated and do not respond to modern needs. They provide incomplete information about a limited number of antibiotics, which is not enough for the doctor to select an effective, targeted therapy.

The BacterOMIC system, on which Prof. Piotr Garstecki`s team has been working in the Warsaw laboratories since 2016, may contribute to solving these problems. The system - recently recognized as one of the most groundbreaking diagnostic technologies in the world - has also been appreciated by experts from the European Innovation Council (EIC), who awarded a grant worth over 1.9 million to Scope Fluidics for its development.

BacterOMIC is the first portable analytical device of this type that will allow doctors to obtain complete and accurate data on the antibiotic resistance to of bacteria attacking a particular patient in just a few to several hours. As a result, the patient will receive effective treatment with a precisely selected antibiotic. In combination with the second Scope Fluidics` project, PCR ONE designed for rapid detection of hospital infections, it forms a comprehensive diagnostic tool that identifies the infection and proposes how to successfully treat it.

The scientist emphasizes that the development of BacterOMIC was to a large extent possible thanks to the cooperation with the Foundation for Polish Science, which supported the company with almost PLN 3.7 million in the TEAM-TECH programme. This allowed to significantly expand his research team. The scientist is a laureate of many FNP programs.

"The initial assumptions have been achieved - says Prof. Garstecki. - The EIC grant we have just obtained will allow us to put our discovery into production so that it can be widely used in a few years". The final stage of certification and registration of the BacterOMIC system is scheduled for mid-2021.

The EIC Accelerator Grant (SME Instrument) is awarded by the European Commission to support enterprises with high innovation potential, mainly small and medium-sized businesses, that want to develop and launch new products, services and business models that can drive economic growth.

Scope Fluidics was founded in 2010 at the Institute of Physical Chemistry of the Polish Academy of Sciences. It cooperates with the academic community, combining the point of view of medicine and industry. It creates solutions that can be effectively translated into production and respond to real needs in healthcare. It develops solutions based on microfluidic technologies for medicine.

Prof. Piotr Garstecki, physicist and chemist from the Institute of Physical Chemistry PAS, is a laureate of the Starting Grant programme selected by the European Research Council (ERC). The researcher is a co-author of over one hundred scientific publications and over one hundred patent applications. He conducted scientific and technical projects in Poland and the United States at Harvard University.