Expert: Space mining is a condition for permanent human presence in space 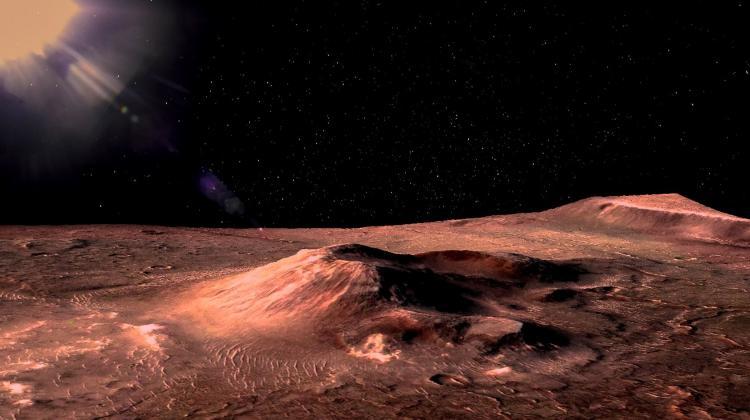 It will be a long time before we start supplying raw materials obtained in space to Earth. All plans for space mining are designed to enable future permanent presence of people off planet, says Gordon Wasilewski from the Space Research Centre PAS.

July 20 marks the 50th anniversary of the first manned landing on the Moon. When American astronaut Neil Armstrong descended the ladder and set foot on the dust-covered Silver Globe, he uttered the famous words: "That`s one small step for man, one giant leap for mankind". In connection with the anniversary, PAP talks with experts on issues related to the exploration of the Moon.

According to the plan announced in March by the US President Donald Trump`s administration, NASA will send astronauts to the south pole of the Moon in 2024 as part of the Artemis program - the successor to Apollo. The agency emphasizes that this is not a one-off event: a permanent base will be established on the Silver Globe by 2028.

According to Gordon Wasilewski from the Space Research Centre PAS, space mining is of key importance for a longer human presence off Earth - be it on the Moon or Mars.

"All activities related to the acquisition of raw materials in space are aimed at enabling or facilitating our presence and our activities in a given place. It will be a long time before we start supplying anything from space to Earth" - Wasilewski believes.

Transporting thousands of tons of raw materials at such distances would simply be unprofitable and unrealistic without orbital logistics infrastructure in the form of space and fuel stations. Firstly, rockets are only capable of carrying cargo that constitutes approx. 10 percent of their total mass. The rest is mainly fuel.

In 2009, millions of tons of ice were discovered on the Moon. Now scientists are working on the most efficient technology that will enable converting it into drinking water, oxygen and... rocket fuel.

"Rocket fuel produced on the Moon from the ice present there can only be liquid oxygen with liquid hydrogen, a very standard and powerful fuel currently used in many rockets" - Wasilewski emphasizes. The expert reminds that the latest generation of rockets, which private companies like Blue Origin or United Launch Alliance are working on, use this type of fuel.

Work on liquid methane engines is also underway. "It can be produced on Mars. For this purpose, we can use the carbon dioxide present in the atmosphere, thanks to which - in a chemical reaction - we can generate methane. That is why SpaceX also focuses on rockets powered with liquid methane" - adds Wasilewski.

When can these resources be expected to be used on a large scale, for example to provide rocket fuel? According to the expert, this is a 10-20 year perspective.

What will lunar mining look like? Unfortunately, Earth miners will not have a future there, especially in the initial phase" - Wasilewski says. "Due to the high risk, the deposits will only be penetrated by robots. The process will be fully automated and supervised by specialists from the station orbiting the Silver Globe or in the base on the surface" - he says.

The most valuable resource for sustaining human presence in space is found in the form of ice, for example in craters. Therefore, contrary to the common perception of mining, there will be no need to dig long tunnels and shafts. "Imagine mirrors located on the edge of the crater, which continuously reflect sunlight onto its permanently shaded bottom. Ice deposits on the bottom are partially covered with a special tent, in which water condenses and is collected by an appropriate device" - Wasilewski described the vision of American engineers.

"Lunar regolith can be used to build residential structures; it can be sintered to create very hard and durable building materials. Due to the presence of silicon in the dust, it is also considered as a material for making photovoltaic panels" - he says.

Other resources present deeper below the surface of the Moon include metals rarely found on Earth: platinum and gold. "In the case of gold bullion, even the most wealthy deposit on Earth contains less pure gold than an average deposit on the Moon" - adds Wasilewski.

The scientist from the Space Research Centre PAS reminds that one of the main goals of the Artemis program will be to establish a permanent presence of people on the surface of the Moon and in its orbit based on the use of local resources. "This is the necessity of this program and the exact continuation of the Apollo project, which assumed that putting a flag on the Moon and exploring its surface would be just the beginning. Already in the 1960s and 1970s there were plans to use space resources to support the mission. Now we know that it is possible, and may even generate substantial profits in the long run - both strategic and financial ones" - he argues.

In Wasilewski`s opinion, the most important players in the future conquest of the Moon and its resources will be Americans (both national agencies and private companies) and China. This race will certainly be dominated by entities from these countries, but the European Space Agency also takes steps in this direction.