What does the dancer`s training have to do with human perception? 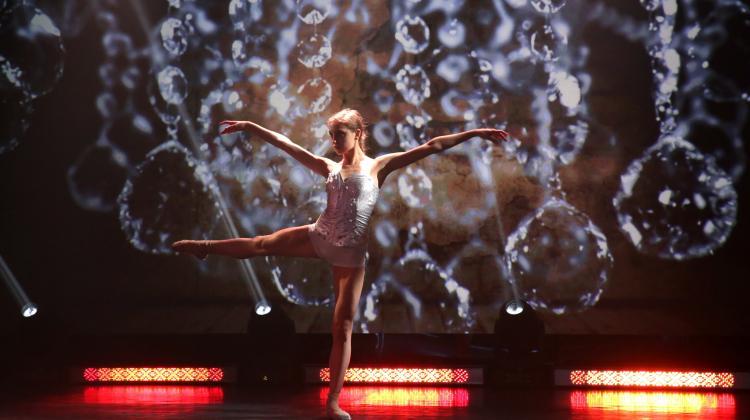 Paulina Bidzińska during the rehearsal before the finals of the competition "Young dancer of the year", organized by the Ministry of Culture and National Heritage, the Institute of Music and Dance and TVP Kultura. Photo: PAP/Tomasz Gzell 28.05.2017

What does dancer`s training have to do with human perception? Theatre researcher from the University of Lodz in collaboration with students of the Academy of Music in Łódź conducts research on dance in the context of knowledge about cognitive processes. Their conclusions are expected to help improve stage work.

The author of the research project "Functions and methods of attention distribution in contemporary dance theatre" is Tomasz Ciesielski - a theatre researcher from the University of Lodz, as well as a choreographer and dancer. As he emphasizes, his project is an attempt to look directly at the dance experience, not through context, technique or history, but "by putting the cognitive processes in the centre, the processes that allow to dance and be fascinated while watching the dance".

The project will include detailed queries, practice-based research, cognitive tests, as well as consultations with foreign experts. In his project, the researcher uses the latest findings of cognitive sciences, which, thanks to the development of technology and interdisciplinary approach, allow "to perceive ever more subtle aspects of human perception".

The project financed by the National Science Centre involves choreography students from the Academy of Music in Łódź. The academy is also a partner of the empirical part of the project. Participants were randomly divided into two workshop groups. One group participated in the "Fighting Monkey" course - the technique innovatively combining martial arts with contemporary dance training. The second group had classes that included modern dance technique and repertoire based on the Rudolf Laban movement technique. All participants took part in cognitive tests before, immediately after and two weeks after the workshops.

The tests primarily concern spatial attention. "The software and devices we use allow to collect extensive data on reaction time, memory and spatial imagination. We used both existing, widely verified solutions, such as the Cantab tests created at Cambridge, and original adaptations of existing solutions for dance, including the Colour Trails Test" - says Tomasz Ciesielski.

He emphasizes that the aim of the research project is to check "to what extent working on attention is part of the dancer`s training, whether it is possible to describe the attention of dancers based on existing discourses of cognitive science, cognitive psychology or phenomenology and use this knowledge in creative practice".

Tomasz Ciesielski hopes that the research will expand the knowledge and tools used by contemporary humanities in the study of cultural phenomena, in particular theatrical ones.

"The study of dancer`s attention results from the desire to better understand the phenomenon that dance artists encounter every day, and usually work with very intuitively" - adds the researcher and artist.

Ciesielski emphasizes that commonly, even among artists, the body is considered to be a key, but also sufficient material for a dancer`s work. But in reality, choreographers often face a situation where the physical preparation of the performer and his or her knowledge of the choreography are very good, but stage quality is still lower than expected.

"In such moments, the dancer often does not need more hours of training, only a good suggestion to focus his or her attention on something else: the relationship with space, rhythm, music, partner, and that suddenly completely changes the material. In other words, directing the dancer`s attention to the appropriate aspect of his or her experience has a huge impact on stage performance" - says Tomasz Ciesielski, a PhD student at the Faculty of Philology of the University of Lodz.

Similarly - in his opinion - the ability of dancers to sustain focus at least on music, rhythm, body line or other performers on stage for a long time is very important.

Tomasz Ciesielski is also a member of the team preparing the "Dance Dictionary of the 20th and 21st Century", created as part of a project funded by the National Programme for the Development of Humanities. (PAP)