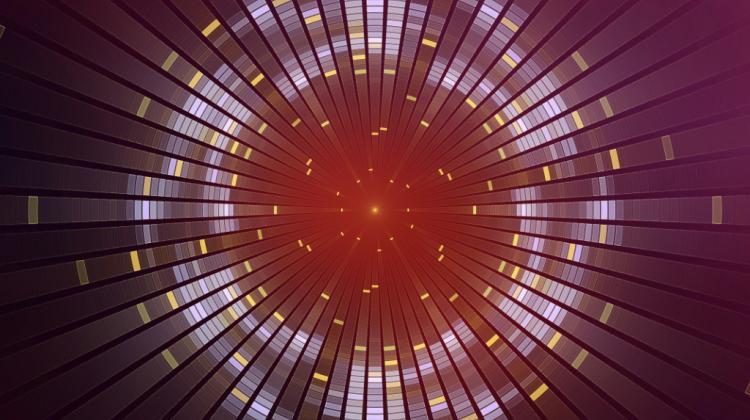 A team of scientists from the Centre of New Technologies of the University of Warsaw is working on a device that will save light and store it in quantum memory. The so-called multimode quantum memory based on cold rubidium atoms may be useful, for example, in secure communication.

Dr. Michał Parniak has been involved in Dr. Wojciech Wasilewski`s research conducted at the Quantum Memory Lab from the very beginning. Dr. Michał Parniak received a stipend from the Foundation for Polish Science in this year`s edition of the START programme.

"We started with the design of an experimental system that allows to obtain one of the longest clouds of cold atoms in the world. This system enables obtaining a high optical density, which directly translates into memory performance" - says Dr. Parniak.

The Foundation for Polish Science stipend holder explains that laser cooling inhibits the excessive movement of atoms, which normally leads to the loss of stored quantum information. Rubidium is a metal, but it evaporates after heating. In this gas of atoms, it is possible to save light. However, to obtain accuracy at the level of individual photons, the gas should be cooled. Atoms are cooled by laser beams to very low temperatures: 20 million of a degree above absolute zero.

The next stage of laboratory work were attempts to control individual photons stored in the cloud of atoms, that is, in quantum memory. "Thanks to the camera sensitive to single photons, we were able to observe emissions of photons from the cloud at many different angles at the same time. This feature makes our memory a multimode one, enabling the storage and generation of multiple photons simultaneously" - the scientist says.

Researchers decided to manipulate stored photons. In this record-capacity memory, they take the form of so-called spin waves. Dr. Parniak emphasizes that the ability to manipulate spin waves is an important bridge between various approaches to quantum computing. Quantum processors based on superconducting systems are developed dynamically (for example by IBM), but the difficulty is sending qubits between them. On the other hand, scientists are able to transmit single photons over long distances, but processing them is difficult.

"Our spin wave processor, in which we have already managed to show interference between two single waves, can solve these problems, because we can easily process spin waves into photons and vice versa" – says the winner of the START stipend.

Dr Parniak emphasises that creating a device, in which one could save light is a great challenge for quantum physics. Possible applications include the use of "captured" photons to secure data. The information in which 1-quantum bit would be written in one photon could not be seen without the knowledge of the communication participants. No one would be able to intercept a part of the message, the signal would simply cease to be received.

Dr. Parniak currently works in Copenhagen; he previously worked in Silicon Valley and in Hong Kong. The physicist emphasises the importance of scientific cooperation with Chinese groups that are working on solving similar problems.