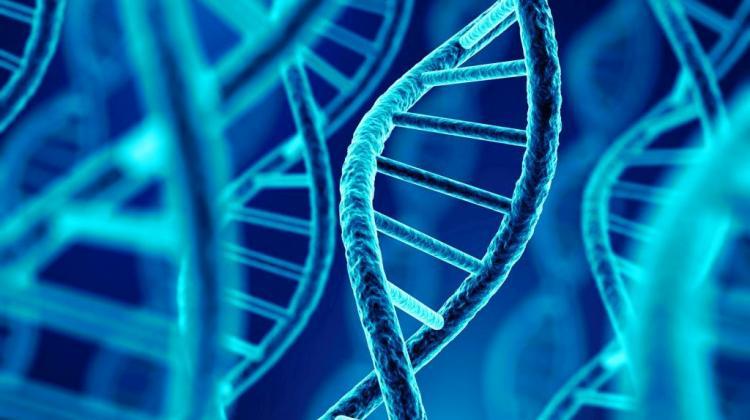 Strong UV radiation penetrated the atmosphere of the young Earth that did not contain oxygen, and thus - ozone. In such conditions, the first biomolecules formed: the basic building blocks of life. They still exist, forming DNA and RNA. Dr. Rafał Szabla from the Institute of Physics of the Polish Academy of Sciences in Warsaw conducts research on the influence of light on the chemistry that could produce biomolecules.

The scientist was awarded in this year`s edition of START stipend programme of the Foundation for Polish Science.

His field of science - particle photochemistry - studies the behaviour of particles under the influence of light in an incredibly short time - one millionth of a millionth of a second. The researcher describes phenomena in the field of quantum mechanics. He simulates reactions that could occur at the dawn of life.

"DNA and proteins retain their properties even though they are exposed to rays. This extraordinary photostability of the basic building blocks of life and recently discovered self-repair mechanisms of short DNA fragments can be so-called molecular fossils, indicating the origin of biomolecules on our planet" - says Dr. Szabla.

FROM LIGHT TO LIFE

The scientist explains that UV radiation is also an important source of energy. It allows chemical reactions, often impossible under different conditions, to occur. Most of the known paths of chemical reactions leading to simple biomolecules (such as RNA or DNA) in the young Earth`s environment contain key stages associated with long-term exposure to UV radiation. In other words, UV radiation was involved in the selection of building blocks and enabled their synthesis.

The researcher conducts quantum-mechanical calculations and simulations that allow to very accurately visualise of the behaviour of molecules under the influence of interaction with UV radiation. Thanks to this, the scientist can understand how chemical reactions could take place and what determines the high photostability of biomolecules.

"We use simulations as a molecular microscope, which allows to view elementary reactions and processes. We can describe their key parameters, for example the required energy. Such knowledge also allows to predict the properties of molecules. We can conduct better experiments simulating the chemistry of the young Earth" - says Dr. Szabla.

The calculations will allow to understand why DNA uses only four kinds of nitrogenous bases: A, G, T and C. These bases form a simple alphabet, universal for all living organisms. Researchers investigate why dozens of other, very similar molecules can not perform this function.

DNA or RNA are information polymers, because they are "recipes" for a protein. They can undergo modifications, change under the influence of various factors. Dr. Szabla analyses such modifications that could give them key properties extending their survival. He studies the modifications that gave DNA and RNA have the ability to self-replicate in the harsh conditions of the young Earth.

"TOY" MODEL OF THE FIRST CELL

"Research on the origins of life on Earth requires a multidisciplinary approach. Chemical reactions must be embedded in specific geological or astrophysical contexts" - explains Dr. Szabla.

The Polish researcher is a member of an international group that studies the origins of life on Earth (Simons Collaboration on the Origins of Life) funded by the Simons Foundation from the US. Experts in various fields of science, such as organic chemistry, geochemistry, astrochemistry, biochemistry, or even astrophysics and planetary sciences, want to build a simple cell in abiotic conditions, such as those, in which there was no life on the planet.

Dr. Szabla cooperates with teams of experimentalists from the UK (University College London and MRC Laboratory for Molecular Biology) and the US (Harvard University and University of California, Santa Barbara).

"These studies will allow us to better understand whether life is an extremely rare phenomenon in the Universe or it could have emerged in one of the recently discovered neighbouring planetary systems" - the scientist explains.

The elementary knowledge we acquire about biomolecules and biochemical processes could have various interesting applications in the future. Researchers are learning to change genetic material - cancer cells, for example - so that they can be destroyed by radiation.

"My research into alternative components of DNA and RNA has a lot to do with the photodynamic therapies used to treat cancer. Perhaps expanding the knowledge about elementary phenomena occurring in DNA will facilitate the improvement of these therapies in the future" - the START stipend holder hopes.

Rafał Szabla graduated from the Wrocław University of Science and Technology. As part of the Faculty of Chemistry science club, gave popular science lectures, conducted experiments for youth and participated in the Science Festival. He pursued his doctorate in the Czech Republic, he still cooperates with Czech scientists.