And yet they move! The movement of synthetic molecular motors can be seen under the microscope 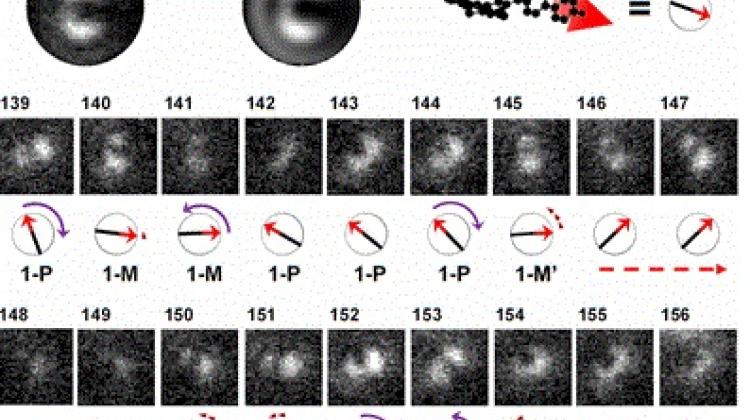 Researchers have designed molecules that start spinning like helicopter rotors under the influence of UV light. Last year\'s Nobel Prize in Chemistry was awarded for research on molecular motors. Now it turns out that you can see this movement with your own eyes - under an optical microscope. This was achieved thanks to the work of a Polish researcher, among others.

When Jean-Pierre Sauvage, Sir J. Fraser Stoddart and Bernard "Ben" Feringa received the Nobel Prize last year, we wrote that the prize was awarded to the "creators of invisible machines". Now it turns out that these machines awarded by the Nobel Committee - although only nanometers (millionth of millimetre) in size - are not be completely invisible. Thanks to research conducted, among others, by Dr. Bartosz Krajnik from Wroclaw University of Technology - it turns out that the movement of these machines can be observed under an optical microscope.

Molecular motors designed and synthesized in the group of last year\'s Nobel Prize winner Ben Feringa were used in the study. These are organic molecules, in which a stator and a rotor can be distinguished. When such a molecule is illuminated by UV light from a laser, the rotor begins to rotate around its bond with the stator - like a bent up helicopter rotor blade or a clock hand.

Previously it was known that molecular motors rotate, but their movement was not directly observed. Now it has been! During his post-doc at the Belgian Catholic University of Leuven, Dr. Bartosz Krajnik was the first to see the rotation of such motors. The study, of which he is the first author, appeared in May in the journal JACS.

"When we look at am image from a microscope, we see dozens of patterns that rotate. It is spectacular if we realize that these are single, rotating molecules! And in addition, we can control the motion of these molecules with light" - Krajnik commented in an interview with PAP. He added: "This study is another step towards controlling molecular machines".

It would seem that it is impossible to observe the movement of individual molecules under a normal optical microscope. They are smaller than the resolution of such a device. There is a trick you can use. Fluorescent marker that glows when illuminated by a green laser can be attached to the molecule. Then, using a fluorescence microscope, individual particles can be seen as luminous points, just as stars are observed in the night sky.

In the experiment conducted by Dr Krajnik, nanomotors with fluorescent markers attached to the substrate were used. They were illuminated by the light from two lasers - green to make the molecules glow, and ultraviolet to put them in motion. "The preparation of samples alone took us 9 hours of continuous work, and then we had to start the experiment immediately" - recalled the scientist.

Researchers used the so-called defocused wide-field imaging technique in the experiment. "If you defocus the image in the microscope is a certain way, a pattern becomes visible that allows to determine the orientation of the molecule in space" - the researcher explained.

The theory is that all nanomotors should turn in one direction. "So far we have not been able to prove it - the time resolution in the experiment was too small. We do not know how many rotations the molecule made between the recorded frames of the video" - said Dr. Krajnik. This can be compared to filming a helicopter\'s rotor - in the video it seems to move with a different speed than it actually does. "The camera can record an image every 10 ms, but in such a short time window we would not register enough light. These are single molecules after all!" - added Dr. Krajnik.

Molecular machines are still waiting for applications. It can be expected that they will be used in nanorobotics for the construction of molecular machines, and in nanomedicine.