The first one bit chemical memory unit: The 'chit' 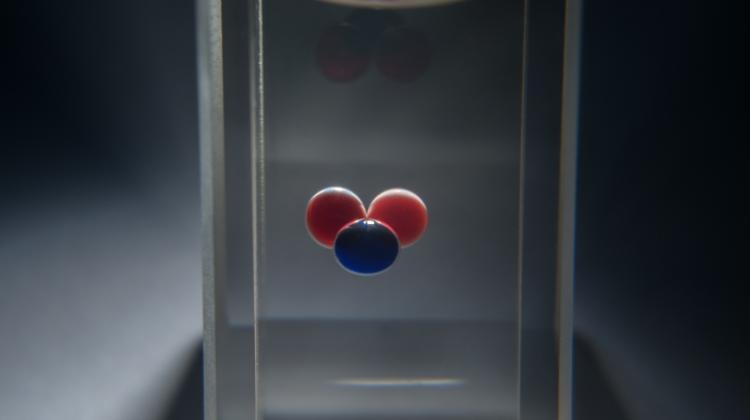 In classical computer science information is stored in bits, in quantum computer science -- in quantum bits, i.e. qubits. Experiments at the Institute of Physical Chemistry of the Polish Academy of Sciences in Warsaw prove that not only physics, but also chemistry is suitable for storing information. The role of the chemical bit, the \'chit\', can be fulfilled by a simple arrangement of three droplets in contact with each other, in which oscillatory reactions occur.

The computer, smartphone, digital camera -- none of these devices could work without memory chips. In typical electronic memory, zero and one are recorded, stored and read by physical phenomena such as the flow of electricity or the change in electrical or magnetic properties of the medium. Dr. Konrad Gizynski and Prof. Jerzy Gorecki from the Institute of Physical Chemistry of the Polish Academy of Sciences (IPC PAS) in Warsaw have demonstrated a working memory of a different kind, based on chemical phenomena. A single bit is stored here in three adjoining droplets, between which chemical reaction fronts propagate steadily, cyclically, and in a strictly defined manner.

The chemical foundations of the memory constructed by the IPC PAS researchers is the Belousov-Zhabotinsky (BZ) reaction. The course of the reaction is oscillatory: when one cycle is over, the reagents necessary to start the next cycle are reconstituted in the solution. Before the reaction stops, there are usually several tens to hundreds of oscillations. They are accompanied by a regular change in the colour of the solution, caused by ferroin -- the reaction catalyst. The second catalyst used by the Warsaw researchers was ruthenium. The introduction of ruthenium was of key significance because it causes the BZ reaction to become photosensitive: when the solution is illuminated by blue light it ceases to oscillate. This feature makes it possible to control the course of the reaction.

"Our idea for the chemical storage of information was simple. From our previous experiments we knew that when Belousov-Zhabotinsky droplets are in contact, chemical fronts can propagate from droplet to droplet. So we decided to look for the smallest droplet systems in which excitations could take place in several ways, with at least two being stable. We could then assign one sequence of excitations a logic value of 0, the other 1, and in order to switch between them, that is, to force a particular change of memory state, we could use light," explains Prof. Gorecki.

Experiments were carried out in a container filled with a thin layer of lipid solution in oil (decane). Small amounts of oscillating solution added to the system with a pipette formed droplets. These were positioned above the ends of optical fibres brought to the base of the container. To prevent the droplets from sliding off the optical fibres, each was immobilized by several rods protruding from the base of the container.

"In paired droplet systems, most often one droplet excited the other. Unfortunately, only one mode of this type was always stable, and we needed two," says Dr. Gizynski and explains: "Both droplets are made up of the same solution, but they never have exactly the same dimensions. As a result, in each droplet the chemical oscillations occur at a slightly different pace. In such cases, the droplet oscillating more slowly begins to adjust its rhythm to its faster \'friend\'. Even if it were possible with light to force the slower oscillating droplet to excite the faster oscillating droplet, the system would in any case return to the mode in which the faster droplet stimulated the slower one."

In this situation, the IPC PAS researchers looked into triplets of adjoining droplets arranged in a triangle (so each droplet touched its two neighbours). Chemical fronts can propagate here in many ways: droplets may oscillate simultaneously, in anti-phase, two droplets can oscillate simultaneously and force oscillations in the third, etc. The researchers were most interested in rotational modes, in which the chemical fronts passed from droplet to droplet in a 1-2-3 sequence or in the opposite direction (3-2-1).

A droplet in which the Belousov-Zhabotinsky reaction proceeds excites rapidly, but it takes much longer for it to return to its initial state and only when it has reached this it can become excited again. So if in the 1-2-3 mode the excitation were to reach droplet 3 too quickly, it would not get through to droplet 1 to initiate a new cycle, because droplet 1 would not have enough time to \'rest\'. As a result, the rotational mode would disappear. IPC PAS researchers were only interested in rotational modes capable of multiple repetitions of the cycle of excitations. They had an added advantage: the chemical fronts circulating between the droplets resemble a spiral wave, and waves of this type are characterized by increased stability.

Experiments showed that both of the studied rotational modes are stable and if a system enters one of them, it remains in it until the Belousov-Zhabotinsky reaction ceases. It was also proved that by correctly selecting the time and length of illumination of appropriate droplets, the direction of rotation of the excitations can be changed. The triplet droplet system, with multiple chemical fronts, was thus capable of permanently storing one of two logic states.

"In fact, our chemical bit has a slightly greater potential than the classical bit. The rotational modes we used to record states 0 and 1 had the shortest oscillation periods of 18.7 and 19.5 seconds, respectively. So if the system oscillated any slower, we could talk about an additional third logic state," commented Dr. Gizynski and notes that this third state could be used not to store information but, for example, to verify the correctness of the record.

The research on memory made up of oscillating droplets, financed by the National Science Centre, was basic in nature and served only to demonstrate that stable storage of information using chemical reactions is possible. In the newly formed memory reactions were only responsible for storing information, while its recording and reading required physical methods. It is still probably many years before a fully chemical memory can be built that could become part of a future chemical computer.