Unique document about the Aztecs studied in Poland 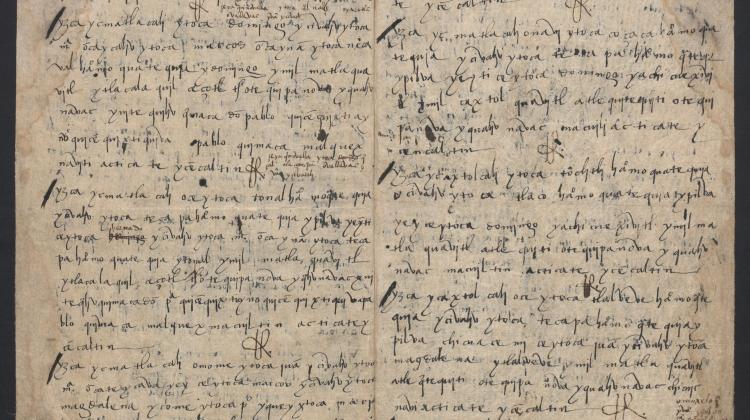 It is inconspicuous. It consists of 80 elongated pages; its format and volume resembles a car atlas. This unique fragment of an Aztec census from the area of today\'s Mexico was made 500 years ago. The document was discovered several years ago in... the Jagiellonian Library of the Jagiellonian University in Kraków. Its translations and studies are the tasks undertaken by a team led by Dr. Julia Madajczak from the Faculty of "Artes Liberales" of the University of Warsaw.

It is one of the oldest known texts written in the language of the Aztecs - Nahuatl, which survived to our times, and the only such document in Poland.

"The fact that the census ended up in Kraków is an amazing coincidence" - Dr. Julia Madajczak told PAP.

Indeed, the "journey" of the written monument could be the plot of an adventure movie.

It all began in the years 1519-1524 , along with the conquest of the giant Aztec empire, which covered a large part of Mesoamerica, by the Spanish conquistador Fernando Cortez.

"Cortez ruled over conquered lands for many years. His power, however, threatened the crown of Spain, and therefore, gradually, the conquistador was pushed away from sovereignty" - said Dr. Madajczak. Spaniards had long-standing, developed procedures for the conquered territories. After the subjugation of the local population by the conquistadors, the standard procedure was to appoint the so-called viceroy and other European officials, who would collectively rule the newly acquired lands.

"Meanwhile, Cortez did not like to share power, he began to argue about the lands and power he believed he was due. That was probably the time when the document I study, the census, was created" - said ethnohistorian.

The census concerns the vast property - Marquesado del Valle, which Cortez received for his services from the Spanish king. "It was not a small piece of land - the area of the property was similar to that of an average European country!" - added the researcher. Today these lands are part of the Mexican states of Oaxaca, Morelos, Veracruz, Michoacán and Mexico.

Madajczak believes that the census was ordered by Cortez himself, who wanted to find out what resources were available and what tribute he was due.

The researcher admitted that the studied document would not be a good read for the average reader, one that you would talk about "over wine with friends". She pointed out, however, that it contained a lot of valuable information about the Aztecs and their culture shortly after the arrival of the Europeans.

Although the three-year project, funded by the National Science Centre (its results will include Polish and English translations of the document), is just beginning, the researcher already has preliminary findings. The census consists of a continuous text (it is not in a form of table) recorded in the Latin alphabet, but in the local language of the Aztecs - Nahuatl. The Europeans introduced the knowledge of such writing in the New World.

"The scribes were probably locals taught to write and read by the European clergy" - said the researcher. She noted that the census was written very neatly - the Indians wrote like that, while the writings of the clergy and the Spanish officials were sometimes downright illegible.

The census was divided by villages - the average village in the area at that time had approx. 200-250 residents. Next is the information about the most important person in the village, then the descriptions of individual households including the number of inhabitants and their kinship. It is also indicated who was the master or - rarely - mistress of the house. For each of the houses it was also recorded what tributes they were obliged to pay.

"While reading the text, I discovered a new type of tax - in addition to the two tributes we already knew about, there was one more enigmatically referred to as the +towel+" - said ethnohistorian.

The "towel" consisted of products such as eggs, corn and cocoa. Each tribute was earmarked for a different purpose - one could maintain the huge residence of Cortez, another - the army, yet another was earmarked for maintenance and construction of roads and canals. The researcher will try to determine who collected all the tributes described in the document.

The document, the contents of which can be compared to a hardly exciting phonebook, provides interesting information about the customs of the Aztecs.

"Sometimes, farmers had several wives, or - as we suspect - concubines, that appear in the census as +maids with children+" - said Madajczak.

The census also reported whether the residents were baptized. It turns out that in many cases only children were. "Meanwhile, in texts from the period the missionaries argued that they Christianised the entire population of the former Aztec State" - added the researcher. Interestingly, widespread slavery - which also can be seen in the census - was completely accepted by the Christian clergy.

Some of the households were exempted from any tribute - they belonged either to the local nobles, whose task was to control the peasants, or to widows. Spanish conquistadors were sometimes merciful.

"Exemption from paying tribute can be compared to giving alms to a beggar, which was considered a good deed among contemporary Christians. Cortez himself was a devout Catholic, concerned about the matter of eternal life" - said Madajczak. After conquering villages, the conquistador would remove statues from pagan temples and replace them with images of Virgin Mary. "He did that immediately after entering each village, ignoring the threat of angered residents, and he often had to flee. This attitude undoubtedly proves that he was a person of strong faith, ready to die for it" - she added.

Scientists do not know anything about the history of the census until the nineteenth century, when its part - the one that would ultimately end up in Kraków - was bought by a German merchant, who purchased it from an antiquities dealer in Mexico. The merchant gave it to a Prussian ruler, who donated it to the collection of the Royal Library in Berlin (now the State Library).

In the early twentieth century, Walter Lehmann worked on deciphering the text, but never published his achievements. Then came the turmoil of the World War II. The census was among the documents evacuated to the cellars of the castle Książ, and later to the abbey in Krzeszów, Silesia. After the discovery of the cache, which also contained many other valuable documents, the exotic document was sent to the Jagiellonian Library in Kraków. Only through research of Brigida von Mentz in 2003, the world found out that this unusual monument was located in Poland. Other fragments of the census are in collections in Mexico and Paris, but the one from the Jagiellonian University is the most extensive.