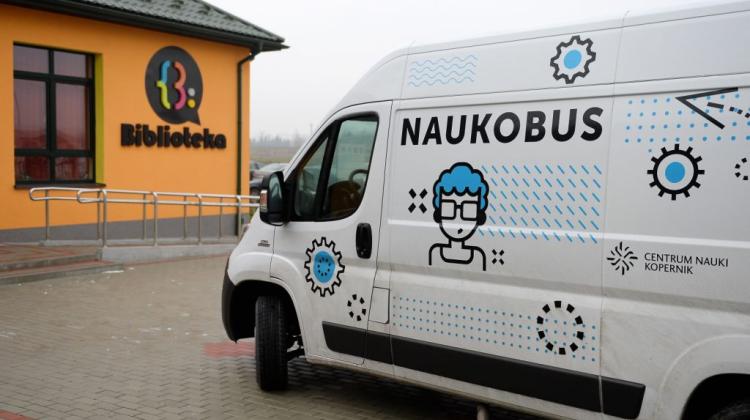 In 2017, up to 100 thousand children will be visited by Science bus - modern mobile laboratory whose activities were inaugurated on Monday in Kozłów (Małopolska) by the Ministry of Science and Higher Education and the Copernicus Science Centre.

Science bus is a mobile laboratory, a kind of exhibition with approx. 20 exhibits, which will be installed in selected educational institutions, especially in primary and secondary schools. As Deputy Prime Minister, Minister of Science and Higher Education Jarosław Gowin emphasised that thanks to Science bus children will discover the secrets of various fields of science, including biology, physics, chemistry, computer science in a practical way, through experiments.

Deputy Prime Minister noted that the program inaugurated on Monday fits into the strategy of the Ministry of Science and Higher Education, according to which one of the pillars of the development of science is its social responsibility. "It\'s about the popularisation of discoveries of the world science, as well as Polish scientists, popularisation among different age groups" - he said.

The laboratory - exhibition will be installed in schools for two days. In one hour the lab can be used by 60 to 70 children, in one day - a few hundred.

The first lab was installed in the Municipal School Complex in Kozłów (Małopolska). "It is my priority that science should not be closed in large metropolitan areas, in large academic centres, but instead reach out to Polish districts, communes" - Deputy Prime Minister said at a press conference in Kozłów.

He added that Kozłów is a commune with a "difficult past, but also a community that organized itself, elected an excellent social worker to the mayor\'s office (Jan Zbigniew Basa-PAP), and since then the commune started to develop very well" - said Deputy Prime Minister .

In January, the Science bus will move to other towns and villages in Poland. Activities in the laboratories will be conducted by the Copernicus Science Centre animators. Director of the Center Robert Firmhofer told PAP that in 2017 Science bus would reach approx. 100 schools, but organizers will try increase this number - according to the Ministry of Science there could be even approx. 200 visited schools, which gives almost 100 thousand students. The lab will also be available to parents.

According to the Ministry of Science, the route of the mobile scientific exhibition it is particularly important - Science bus will visit villages and towns having up to 130 thousand residents; the aim is to equalize educational opportunities.

Science bus is yet another program, next to the University of Young Explorers and the Programme for Universities of the Third Age, implemented within the framework of the social responsibility of science included in the so-called Gowin strategy for science and higher education. The estimated budget for the first year of the Science Bus program is 2.5 million zlotys. The Ministry of Science and Higher Education plans to gradually increase the range of exhibitions in the coming years.