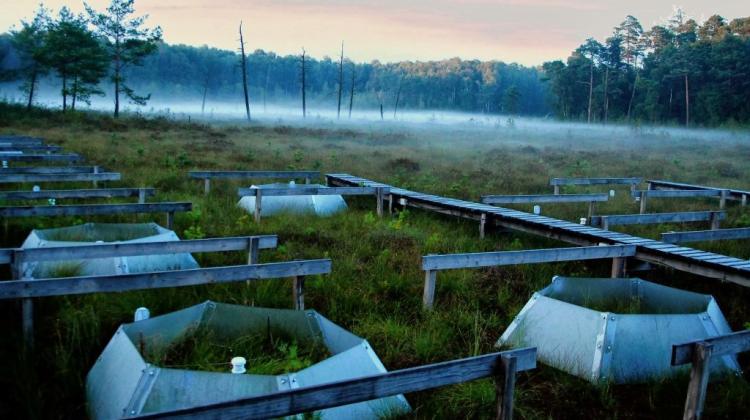 Global warming is a real threat to carbon-storing peat bogs. Only two years of the OTC shelter experiment were enough for significant changes to begin to occur in the local vegetation - showed the Polish-Swiss research team\'s experiment.

"The existence of peat bogs is very important for the environment. Although in the entire northern hemisphere peatlands occupy only 3 percent area, they store as much as 30 percent soil carbon. It\'s very, very much" - said in an interview with PAP CLIMPEAT project participant Katarzyna Marcisz from the Faculty of Geographical and Geological Sciences, A. Mickiewicz University in Poznań.

She noted, however, that global warming could lead to the drying of peat bogs. And if a bog dries, not only the carbon from the air will not be stored there, but worse - the drained peatlands will release carbon into the atmosphere. This in turn will further increase the greenhouse effect and accelerate the increase in average global temperatures.

Scientists from the Polish-Swiss team decided to find out how quickly bogs would react to increased air temperature. They devised a plan for artificially accelerating the greenhouse effect in a portion of a bog. Over 1 m x 1 m plots they installed open top hexagonal shelters made of transparent plastic (polycarbonate) - so-called OTCs (Open Top Chambers). It was enough to increase the temperature in the experimental OTC plots on average by 1-2 degrees C, compared to the plots without OTC. The researchers also simulated drainage of peatlands, by raising the selected plots by 10 cm - so that the vegetation of bogs had less access to water.

A similar study has been performed at the University of Neuchâtel in Switzerland. Scientists collected profiles from peat bogs in France and transplanted them into the laboratory where they simulated high, low and average water levels. It turns out that the results of the two experiments lead to similar conclusions.

Experiments lasted two years. Even after such a short time, significant differences could be noticed in the ecosystems of peat bogs. "Our research shows that with increasing temperatures and drying, peat moss (Sphagnum) characteristic of peat bogs is easily displaced by vascular plants such as sedges and shrubs. You don\'t need much to disrupt the ecosystem of bogs. And then it is not easy to go back to the previous, natural state" - said Dr. Marcisz.

In Poland, the study covered the bog Linje near Bydgoszcz. 28 test plots were prepared in the experiment. The plots are fitted with equipment for measuring temperature and humidity. The area of the experiment is not easily accessible - peat bogs are areas inaccessible to humans. Researchers made their way to the plots by moving on footbridges and putting ladder on the surface of peat bogs to avoid affecting the functioning of the bog.

Dr. Marcisz laughs that the plots - places warmer than the environment - have become a favourite resting spots of rodents inhabiting the bog. The animals chewed through cables, and a rabbit was sleeping under one of the shelters. "When the sun shines on the shelter, it is actually warmer underneath" - the researcher told PAP.

In the experimental plots researchers also been studied the response of microorganisms, including thecamoebians, to changes. "The composition of species in the plots dried in two years changed to a more typical for arid habitat" - said Dr. Marcisz.

Scientists also drilled into the substrate of the bog and collected core sample to see how the bog had changed in the past 2 thousand years (this can be determined on the basis of preserved grains of pollen, plant debris and microorganisms). It turned out that 200 years ago the local residents began to intensively use the peat bog. They also began to reclaim the object, which resulted in large fluctuations in the water level. The peat bog cover changed: Sphagnum magellanicum disappeared from the surface and was replaced by now more common Sphagnum fallax.

The study was funded by the Polish-Swiss Research Programme (PSRP) operated by the National Information Processing Institute.