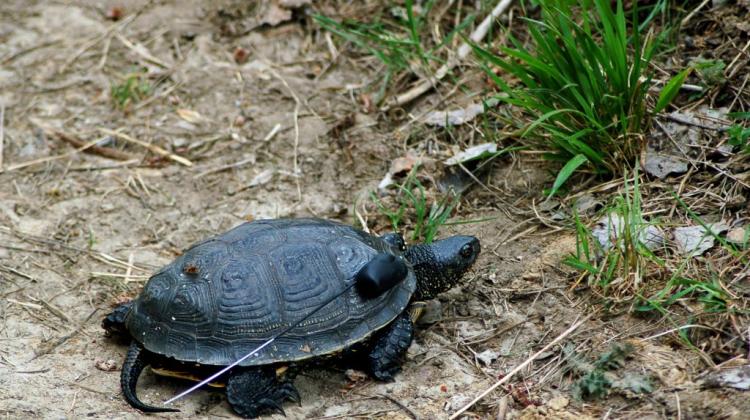 Young pond turtles that hatched in the autumn of last year, spent the winter in underground nest chambers and in the spring started to search for water reservoirs. At least 23 turtles from the nests secured in Wielkopolska by the Society "Salamandra" have reached their destination.

In the Polish climate, newborn turtles usually spend the first winter underground, in the place of birth, although in favourable weather conditions they sometimes leave the nest chambers already in late summer or early autumn. "Exactly one year after we caught the first pond turtle female and fitted her with a telemetry transmitter, young turtles weighing a few grams began to scramble out of the ground and move toward the water" - said Borys Kala from the Polish Society for Nature Protection "Salamandra".

Last year, scientists from the "Salamandra" - as part of the turtle protection program CHELONIA - put transmitters on eight turtles, including seven females. This later allowed to track their activities from a distance. Although turtles are a symbol of steadiness and slowness, tracking them proved difficult. Researchers have spent hundreds of hours walking through the woods and fields with special receivers and antennas and trying to locate the animals with transmitters.

Determined naturalists managed to find all the nests, in which females laid eggs. It turned out that were located in places where they were in danger of almost certain destruction. Unfortunately, the areas near the ponds in which turtles live, are now in most cases developed agriculturally. "Fortunately, the persons working in these fields and meadows, without exception, respect nature and gladly agreed to carry out field work in a way that preserved the turtle nests" - explained Kala, who leads the CHELONIA program. The located nest chambers were additionally secured with metal nets to protect them from predators.

Already in the first year of the CHELONIA program naturalists managed to collect a lot of valuable data on the population of the European pond turtle. This year, scientists will try to put transmitters on more adult turtles and again locate and secure all nests. "Well! This spring we will not catch a lot of sleep either" - admitted the program leader. "But the view of a little turtles disappearing in the depths of the forest ponds rewards our efforts. There are still many dangers, and probably only a small part of them will live to adulthood. Nevertheless, we feel great satisfaction that they were able to survive to this stage of life" - he added.

The program CHELONIA, the objective of which is to protect the largest known population of the European pond turtle in Wielkopolska, is carried out with the support of AQUANET SA, the Regional Fund for Environmental Protection and Water Management in Poznań and private donors. The data collected in two seasons will provide basis for recommendations for protective measures for this population.