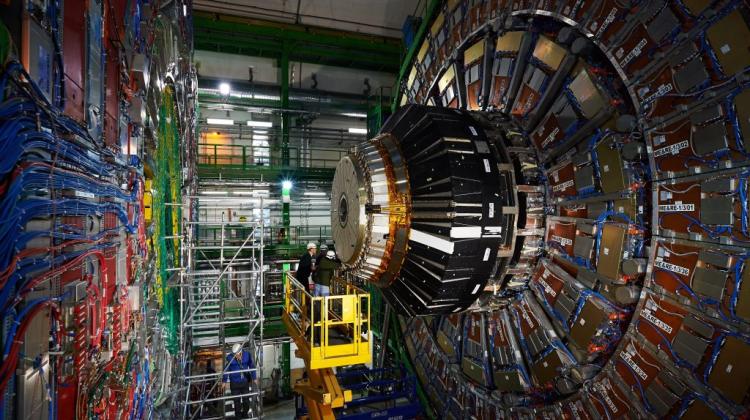 In March, after a two year break, the Large Hadron Collider (LHC) at CERN near Geneva will be launched. Is expected to reach almost twice the collision energy it had before. Although the LHC was turned off, physicists were not on holiday - told PAP physicist Dr. Michał Bluj.

The Large Hadron Collider is the most complex machine built by man. It is a type of microscope that allows to explore the world in a very small scales. In the machine, collision occur of two particle beams moving in opposite directions - protons and lead nuclei. Since February 2013, after three years of intensive work, the LHC takes a break - the unit has been repaired and modernized to achieve higher collision energy than ever before. This will allow to better investigate the nature of elementary particles.

The second round of data collection (Run 2) will continue from 2015 to 2017. Scientists predict that the collision energy twice as high as before: 13 TeV (teraelectronvolt). In addition to the increased energy, luminosity, i.e. the intensity collision will also be doubled (from 20 million times per second to 40 million times per second). Dr. Bluj, physicist at the National Center for Nuclear Research involved in the CMS experiment at the LHC, explained in an interview with PAP that the beams of protons are accelerated in accelerators in packets called bunches. In the LHC after the new opening not only the number of such packets per second will be increased, but the number of protons in the packet. In addition, collisions will be more effective due to changed geometry of intersections of proton beams. "This means that in three years we want to collect five times more data than in the years 2011 and 2012" - summed up Dr. Bluj.

He admitted that scientists are slightly nervous before restarting the accelerator - they are not one hundred percent sure that the device will operate properly with the target settings. Therefore, the researchers want to reach them in small steps. After the calibration, initially only one beam of particles will be accelerated, with a small number of proton packets, and only then - if the LHC operation is stable - two beams will be accelerated, and the number of packets of protons will be increased until the target settings are reached.

"When engineers prepare a Formula 1 car for the race, they do not know if everything will work. It may happen, for example, that at some point the engine turns off or the wheel falls off. To minimize this risk, a lot of testing is done before the race, and improvements are introduced gradually. The case of the LHC is similar, but more difficult, because it is the only such device in the world and is not always possible to predict what can go wrong" - noted physicist. The LHC should reach the target parameters in the autumn of 2015. "This does not mean, however, that the data collected before that date will be useless for researchers" - emphasised Dr. Bluj.

Physicist reminded that there was a major accident at the LHC in September 2008, a few days after its first launch. At that time, there was an uncontrolled discharge of the collider magnets. 60 superconducting magnets were damaged and there was a leak of helium, with which they were cooled. The magnets in the LHC (dipoles) are quite something - they weigh 35 tons each, and there are over 1200 of them in the 27 km LHC tunnel. They bend the path of the accelerated particles in the collider. Magnets must be thoroughly tested and stable before turning on the accelerator. If something goes wrong, they overheat and break down. This is what happened during the first failure. Servicing lasted several months. "The problem was fixed. It was decided, however, that the first round of data collection (Run 1, from November 2009 to February 2013 - ed. PAP) should be performed at a lower collision energy than nominal" - commented the physicist.

For the accelerator to show what it can do, modernization was necessary, which was carried out over the past two years. "Part of the modernization was forced by the earlier failure" - said the scientist. During the LHC break, some superconducting magnets and connections between them have been replaced, a new cryogenic (cooling) system has been designed as well as a more secure the vacuum system (in the tunnel, in which particles accelerate and collide, there is a vacuum), and solutions better focusing the beams and electronic systems resistant to radiation have been introduced.

In the past two years, researchers associated with the LHC experiments conducted a very thorough analysis of the already collected data, finalised their work carried out in Run 1 and prepared experiments to be carried out after the next accelerator launch - including a modernized method of capturing and selecting data from the accelerator. Polish scientists from Dr. Bluj’s team also participated in these activities. "We did not have time off" - assured the researcher.

He added that the new launch of the LHC, the work of physicists involved in the experiments will change. Now they will have to participate in shifts in the work on the detector, to oversee the data collection process, ensuring the quality of its operation. Besides, they will conduct a preliminary analysis of the new data. Poles will also be involved in all these activities.

Poland officially became a member of the European Organization for Nuclear Research CERN in 1991. Today, all projects and experiments at CERN involve almost 300 experts from Polish research units, including approx. 100 working in experiments at the LHC.