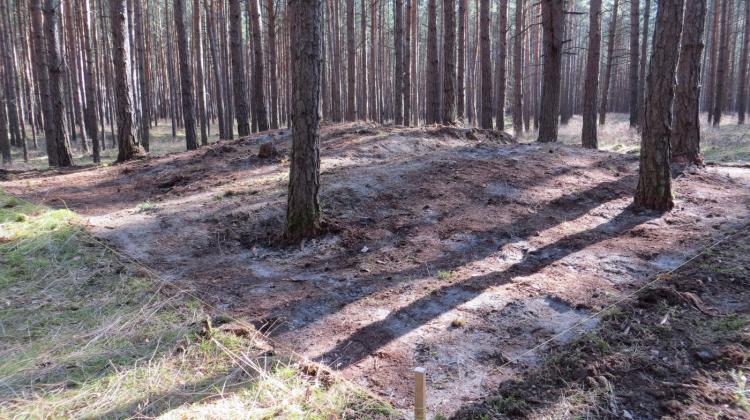 In the forest near the village Strumiany east of Szczecin, scientists discovered more than 100 previously unknown burial mounds. The discovery was made possible by the analysis of data obtained from air laser scanning (ALS).

"There could have been more mounds, but some were probably destroyed during forestry work” - said the discoverer Grzegorz Szalast, doctoral student in the Department of Archaeology, University of Szczecin.

The researcher identified 114 regular mounds forming three distinct clusters. Their dimensions are approx. 6-8 m in diameter and 0.4-0.7 m in height. After the discovery of a potential archaeological site, the researcher analysed the historical and contemporary topographic maps of the region. "This allowed to rule out the nineteenth and twentieth-century origin of these structures" - said Szalast.

Natural origin of the discovered mounds was questioned by the experts from the Department of Marine Geomorphology, Faculty of Earth Sciences, University of Szczecin.

In July, archaeologists from the Department of Archaeology, University of Szczecin, on behalf of the Regional Office for the Protection of Monuments, went to the field to verify their hypothesis about the mysterious objects. Excavations were led by Prof. Grzegorz Domański.

"The research clearly confirmed the anthropogenic nature of the registered structures, unfortunately we are still unable to accurately determine the time of their elevation" - said Szalast.

Excavations were preceded by GPR surveys carried out in cooperation with Szczecin geodesic company GISPRO Sp. z o.o. Unfortunately, in the case of the selected mound the results were unclear. "The echograms only showed the expected variation of soil layers, which, as confirmed in subsequent studies, was also due to the lack of any structure within the mound" - noted the archaeologist.

Further analysis of data from airborne laser scanning of the region brought more interesting observations. It turned out that on the other side of the river Ina, at a distance of approx. 3 km, there are much larger mounds. The dimensions reach approx. 10-25 m in diameter and 3 to 5 m in height.

"It might be reasonable to associate them with reports of Martin Wehrmann - researcher of the history of Pomerania from 1894, who wrote that the pastor Juhr of Poczernin donated to museum collections ceramic vessels from the surrounding mounds with graves in stone clusters. To this day, their location remains unknown" - said Szalast.

Data from air laser scan used to detect mounds come from the project ISOK - Information Country Protection System against extraordinary threats. With these data, archaeologists do not have to perform costly flights over the area of interest. Once collected, information can be used for both scientific purposes and crisis management. However, according to archaeologists, these data should be treated with caution, as they were not prepared for archaeological analysis. They are not always suitable for use by researchers of ancient history.