31 medals for Polish inventions at invention exhibition in Paris 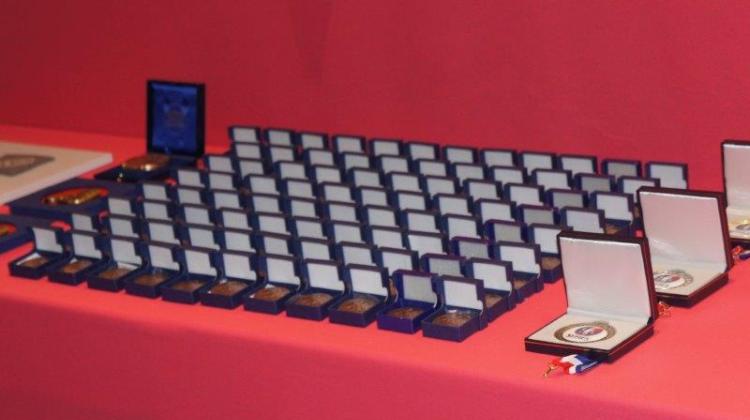 "In this year\'s edition of the exhibition, Polish stands presented 31 inventions and 10 design projects. However, there is more we can be proud of than the mere number of innovative solutions" - said Aneta Manista from Eurobusiness-Haller.

The jury awarded 31 medals to Polish exhibitors, including six gold, 11 silver and 12 bronze medals, and two medals of the French Association of Inventors and Manufacturers AIFF.

Among the gold medal winners was the invention developed at the Institute of Welding in Gliwice – UKS device for leak testing of welded joints by bubble test, and polymer material with reduced flammability obtained from burdensome chicken farm waste (feathers) developed at the Institute of Biopolymers and Chemical Fibres and the University of Technology and Life Sciences in Bydgoszcz.

Gold was also awarded to the composite on diamond warp with ceramic phase and its production process developed at the Institute of Advanced Manufacturing Technology, and GRYF - a robot designed to rapidly assess the security hard-to-reach areas (chassis of vehicles, etc.) developed at the Industrial Research Institute for Automation and Measurements.

University of Lodz was also awarded a gold medal for the fourth-generation dendrimer used to manufacture the drug, which could become a hope for patients with chronic leukemia.

The jury also awarded gold medals to Polish inventors in the Young Inventor category for: ESKONzO - Electronic Communication System for the Disabled - developed by students of King Jan III Sobieski School No. 6 in Jastrzębie Zdrój. Young inventors also received special awards of the French Medical Association and the Delegation of the Ministry of Foreign Affairs of France for Enterprise in the European Union.

The Institute of Precision Engineering was awarded two silver medals for: BorTermoFluid - the method of fluid drilling of metal products, and for the innovative method of heating charges in vacuum and atmosphere controlled furnaces.

The Mossakowski Medical Research Centre PAS together with the Maria Skłodowska-Curie Institute of Oncology in Warsaw, presenting "Peptide hydrolysates of hair proteins with properties that inhibit the development of melanoma" received the AIFF medal and special award of the Biomedical Institute of the Russian Academy of Sciences.

The Faculty of Medical Sciences, University of Warmia and Mazury in Olsztyn, together with the University Clinical Hospital in Olsztyn, were awarded brown medal and a special distinction of the Biomedical Institute of the Russian Academy of Sciences for the NMFlowMetaAnalyser system.

The Military University of Technology in Warsaw won no less than three bronze medals for: SAVE - energy saving system; cryptography useing elliptic curves in applications for telecommunication terminals intended for use in network-centric national and coalition systems, and for SENSE - mobile system for detecting and alerting of epileptic seizures using surface electromyography.

Medal of the French Association of Inventors and Manufacturers AIFF was awarded to the Scientific Research Team of the ICT Systems and Hardware Applications Centre, Tele - and Radio Research Institute, for the Programmable controller for smart electricity grids. Industrial Institute of Agricultural Engineering received bronze medal for the next generation machines for obtaining biomass from willow.

Concours Lépine exhibition is organized since 1901. The initiator was prefect Louis Lépine, who created the exhibition in one of his numerous efforts to stimulate French economy to fight the crisis. The competition was later given his name.