A method for nanoreactors - peptide capsules for chemical reactions 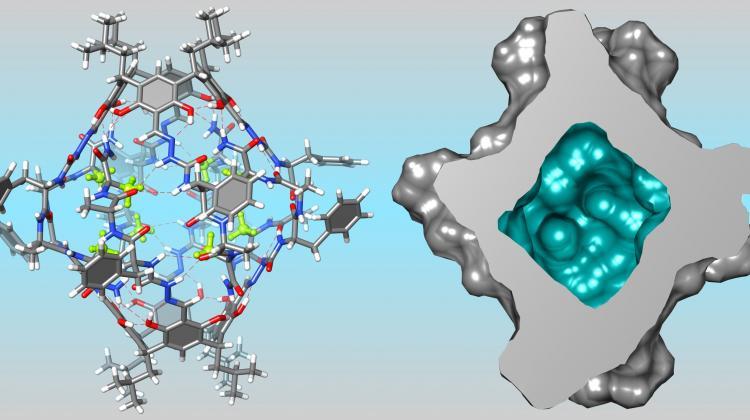 The peptide capsules developed at the Institute of Organic Chemistry PAS can be used to carry out chemical reactions or transport insoluble materials. Author: Hanna Jędrzejewska

Researchers from Warsaw have developed a way to create peptide nanocapsules, in which chemical reactions will take place. Such organic nanoreactors can facilitate production of compounds that are difficult to obtain.

An article on this topic by Hanna Jędrzejewska and Prof. Agnieszka Szumna appeared in the prestigious journal "Chemical Science" http://dx.doi.org/10.1039/C8SC05455J

Researchers from the Institute of Organic Chemistry of the Polish Academy of Sciences in Warsaw used nanometer size, flexible and biocompatible peptides (protein fragments) to build porous, stable capsules. These capsules can be used as nanoreactors and become a convenient place to catalyse difficult chemical reactions. They can also be a vehicle for delivering insoluble drugs to a specific place in the body.

Prof. Szumna explains in an interview with PAP that if a drug does not dissolve in water, it becomes much less available to cells, and its usefulness decreases drastically. But if you enclose the drug in a capsule decorated with peptides prone bind with water, it will dissolve in water. And then it will be able to travel through the body. The capsule should then be opened in the target location in order to release the drug. "The capsule opens, for example, at a lower pH, and tumour tissue has a lower pH" - the researcher describes.

For now, her team has managed to enclose insoluble fullerenes (football-shaped carbon particles) in the capsule and thus dissolve them in water. "Now we`re starting a project with Czech partners. They produce new cisplatin-based anticancer drugs that do not dissolve in water. If we can put them in a capsule and make it open in the right place, it will be an advancement in controlled drug delivery" - the researcher describes.

But the greatest hopes of the researcher from the Institute of Organic Chemistry PAS are associated with the fact that their tiny capsules can be used as nanoreactors. Prof. Szumna explains that if molecules - substrates of a reaction - are enclosed in such a capsule, the chances of a reaction between them significantly increase. Not only are they closer to each other, they are properly arranged, but in addition they can be provided with an element that will facilitate the chemical reaction between them. The capsule is thus a catalyst for the chemical reaction.

Due to their function, peptides, which the researchers use in the production of capsules, are a dream building material for creating catalysts. They are fragments of enzymes - our natural catalysts that facilitate reactions in cells. But peptides are long and flexible like jelly beans. It is difficult to build a rigid peptide capsule because it will quickly collapse. That is why until now peptides have not been used to construct nanocapsules. When constructing such capsules, other scientists used rigid, inorganic compounds. Rigid capsules are worse as catalysts, which the reacting compound must fit. Researchers therefore decided to partially arrange and stiffen the peptides by placing them on two nanometer-sized, flowerpot-shaped foundations, making the capsule both rigid and flexible at the same time.

Nature uses 20 amino acids with a specific chirality, but in their research scientists used amino acids with chirality that does not occur in nature. These molecules have the same composition as natural amino acids, but they are their spatial mirror images. This difference is enough for the body not to recognize them in its life processes, which is why the peptides that have them in their composition are more stable in the body.

The method of attaching peptides to the foundations, which the researchers have shown, is so universal that it allows for the production of various types of capsules. Peptides - forming the walls of the capsule - can be freely chosen to give the capsules pre-set functions. "We have an arsenal of 20 amino acids that we can use to build peptides, for example, we can design polar peptides, hydrophobic peptides or peptides that have the right catalytic sites. This allows to design a place in the capsule where specific compounds can fit" - Prof. Agnieszka Szumna says in an interview with PAP.