Mars releases trace amounts of methane. We know where 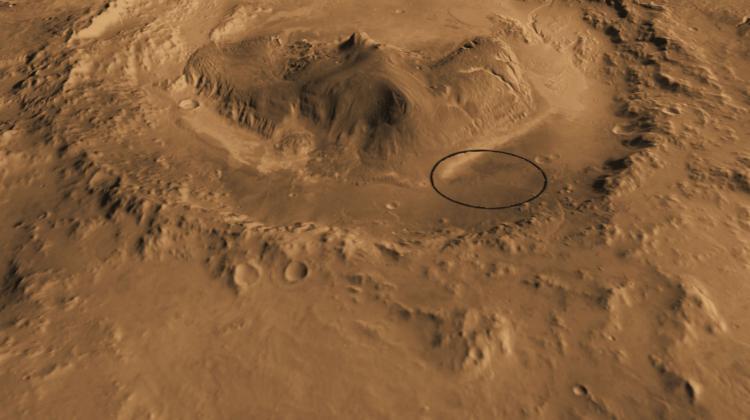 Gale Crater, where the Curiosity rover landed (this area is marked in black), in the vicinity of which methane traces in the atmosphere were detected in 2013. Photo: NASA/JPL-Caltech/ASU/UA

Small amounts of methane are sometimes released from the below the surface of Mars, show the results of analyses of an international team. Researchers - including a Polish scientist - have identified a possible source of methane on Mars and determined where the gas in that source comes from.

Methane is a colourless and odourless organic compound that, among other things, is a component of natural gas. On Earth, it can form, for example, as a result of anaerobic decomposition of plant debris. The presence of methane may - but does not have to - indicate the presence of life. That is why the probes sent to Mars were tasked with looking for traces of methane.

On June 16, 2013, the Mars Express probe orbiting Mars and performing PFS (Planetary Fourier Spectrometer) measurements detected the presence of methane in the atmosphere of Mars near Gale Crater. Gale Crater is an important place on Mars for us, Earthlings: the Curiosity rover landed there. Exactly one day before the Mars Express measurements, the rover also detected methane in the same region - this time near the surface of Mars.

Methane traces were discovered on Mars for the first time in 2004, but since it was a small amount close to measurement error, some scientists considered it uncertain at the time. Registration of methane by two independent instruments in 2013 gives greater certainty that methane on Mars is not a mistake.

The researchers took a closer look at the results. They analysed what could actually be a source of methane registered by two independent probes. The results were published in "Nature Geoscience". Dr. Paulina Wolkenberg from the Space Research Centre of the Polish Academy of Sciences and the Italian Istituto Nazionale di Astrofisica and Istituto di Astrofisica e Planetologia Spaziali participated in the analysis of this data led by Dr. Marco Giuranna.

"It was an episodic occurrence of methane. It could be released only from time to time, and only in some places" - Dr. Wolkenberg says.

Scientists used models of Martian atmosphere circulation to prepare a simulation showing where methane could come from take in the Gale Crater area. Geological analyses were also carried out, including analyses of images of the surface of Mars, to identify structures, from which this gas could be released into the atmosphere.

The analyses showed that the probes probably recorded a small amount of methane originally trapped beneath the surface of Mars, which was released at some point and ended up in the atmosphere. Scientists calculated that the source of methane should be located approx. 500 km east of the Gale Crater.

Two hypotheses have been developed. According to one of them, methane could be trapped beneath the surface of Mars under surface ice. At higher temperatures, the ice may break, and small amounts of methane are released. The second hypothesis is that methane could have formed as a result of the reaction of a rock - olivine - with water. The reaction of olivine with water in the presence of CO2 and other catalysts produces serpentine. Hydrogen released in this reaction bonds with carbon dioxide and forms methane. The presence of water at a low temperature of 40 to 90°C is required for the process to take place approximately 2 km below the surface. Methane could be released through cracks in the rocks and soil.

"We are not able to distinguish whether the methane we are observing is of organic origin, and therefore a proof of the existence of life - or it is of inorganic origin" - the researcher emphasises.