Active enzyme will light up the molecule 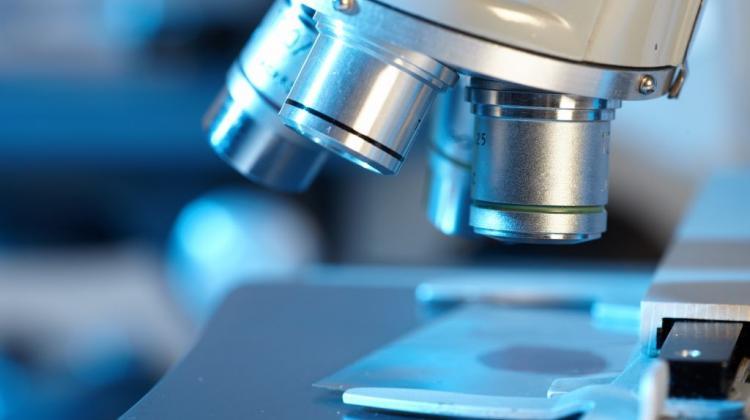 A molecule that glows during the enzyme activity has been developed by Dr. Paulina Kasperkiewicz-Wasilewska from the Wrocław University of Science and Technology. Well known enzymes can be used for research on rapid cancer tests and targeted therapies.

HOW TO SPY ON ENZYMES?

It is not easy to see an enzyme and catch it "in the act" - when it is active. Dr. Paulina Kasperkiewicz had to first obtain molecules that would allow her to spy on enzymes. These molecules start to glow when the enzyme appears and works.

The chemist from the Wrocław University of Science and Technology explains that enzymes called serine proteases defend the body against pathogens, and additionally participate in the elimination of cancer cells. However, hyperactive enzymes may aggravate ailments in autoimmune diseases, which is why balanced amount of these enzymes in the body is so important. Endogenous inhibitors are responsible for this balance. These molecules inhibit the enzyme`s activity when there is too much of it and prevent it from causing damage.

The researcher has created a molecule that allows to watch such enzymes in action. She admits that when she first saw that she had succeeded and that the would particle glows under the microscope, she almost burst into tears of joy.

Dr. Paulina Kasperkiewicz first wants to see how enzymes behave and what functions they perform in healthy cells. In the next steps, she will compare the activity of these enzymes in healthy and diseased cells. The research will be carried out in cooperation with medical universities in Wrocław and Łódź.

"In the future, this knowledge may translate into improved diagnostics and perhaps targeted therapy, for example cancer therapy" - the chemist explains.

"Enzymes have their substrates, that`s their food. Enzymes act on those substrates like scissors that can cut a chain into smaller parts. Cutting the chain activates many processes in the body" - says Dr. Kasperkiewicz.

Previous tools that scientists used to watch this type of enzymes, called antibodies, did not really allow to check if the enzyme worked. They gave a signal even when the enzyme was inactive, when it was not cutting the chain. The researcher decided to find fluorescent molecules that would only light up when combined with an active enzyme.

Molecules that she obtained together with two young scientists: Sonia Kołt and Tomasz Janiszewski, are precisely a chain that glows after being cut by the enzyme. "Thanks to this, we can observe the place in the cell, in which an active enzyme is located" - explains the researcher.

Dr Kasperkiewicz published an article in JACS about molecules that bind to serine proteases in neutrophils. Her next publication will concern the results of her work on granzymes, that is, enzymes that are transported to a cell targeted for destruction, for example a cancer cell.

Paulina Kasperkiewicz is one of the ambassadors of the of the Foundation for Polish Science campaign #Jestemstartowcem (https://start.fnp.org.pl). The campaign aims to raise funds for young scientists from private donors, including 1 percent PIT donations.

The researcher recalls that financial support at the beginning of her academic career was very useful during her first trip to California, where prices were high. After defending her PhD, the researcher went for a two-year postdoctoral fellowship to the United States. Following her return to Poland (HOMING grant) she received a prestigious L`Oréal-UNESCO grant for Women in Science.