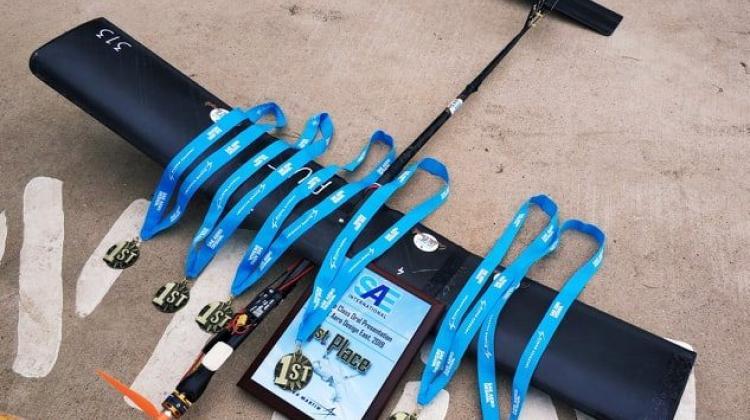 Students of the Rzeszow University of Technology won a gold medal at SAE Aero Design East 2019 in the USA. This is the first ever gold medal for the science club EUROAVIA Rzeszów, awarded for technical presentation in the Micro class, reports the university spokeswoman Katarzyna Kadaj-Kuca.

A record number of 85 teams from around the world took part in the event in Fort Worth, Texas. The task of participants was to design, optimise and build a lifting aircraft. They competed in three classes: Micro, Regular and Advance.

The Rzeszow University of Technology was represented by members of the science club EUROAVIA Rzeszów at the Department of Avionics and Control Systems of the Faculty of Mechanical Engineering and Aeronautics. They competed in Micro and Regular classes and won gold for the technical presentation of their model in the Micro class.

"Our aircraft gained recognition among Lockheed Martin specialists. The jury appreciated the ingenuity and innovation of the construction solutions used in our model" - revealed Aleksandra Pasich from EUROAVIA Rzeszów, aviation and astronautics student.

In the general classification in the Micro class, the Rzeszów team won the 5th place after an extremely fierce competition.

"It is worth noting that EUROAVIA Rzeszów was the smallest team in the competition, it consisted only of six people, and for four of them it was a debut in a competition of this rank" - emphasised Kadaj-Kuca.

Pasich pointed out that this was only the halfway point in their struggle in SAE Aero Design.

"In the beginning of April we are heading to the USA again to take part in the western edition of this competition in Van Nuys, California. We are in the middle of intense preparations, we are determined to get even better results" - said Pasich.

SAE Aero Design is a series of international academic competitions for aviation students, co-organized by Lockheed Martin. There are two editions: East and West in the United States. 75 to 85 teams representing research centres from around the world participate in each edition. This year, representatives from South America, Asia, Europe, Africa and most of all North America took part in the East edition.