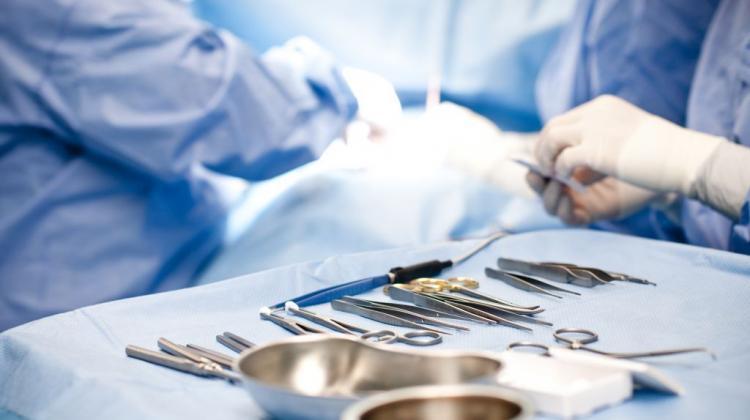 Polish surgeons from the Medical University of Warsaw performed a pioneering intravascular repair surgery of the Nellix stent graft, implanted a few years earlier due to abdominal aortic aneurysm. This is the first successful surgery of this type in Europe and probably in the world, the university representatives say.

The press office of the Medical University of Warsaw (WUM) informed about the surgery in a press release sent to PAP.

Aortic aneurysm is its local, baggy widening by more than 50 percent compared to its normal size. Abdominal aortic aneurysms appear in 60 people in 100,000 and are usually located below the renal arteries.

The disease gives no symptoms in most cases, but it is very dangerous. An aneurysm can burst at any time and lead to death, which is why it is compared to a ticking time bomb.

Aneurysms are often detected accidentally during imaging examinations due to other indications. In most cases, doctors perform the minimally invasive procedure -they introduce a stent graft (a specially woven tubular prosthesis made of non-woven fabric that bypasses the aneurysm) into the abdominal aorta through small incisions in the groins. The stent graft becomes a "new aorta" within the aneurysm, supplying important organs with blood. The aneurysm remains outside and shrinks over time.

In the case of the Nellix stent graft, the space between the prosthesis and the wall of the aneurysm was filled with a special polymer (biocomponent) designed to attach the prosthesis and prevent possible blood leaks. Unfortunately, after implantation of the Nellix stent graft, there were so many significant complications that it was completely withdrawn from the market by the manufacturer (Endologix), and the European Society for Vascular Surgery recommends against its use.

Due to the specific structure of the Nellix stent graft, repair surgeries in patients with leakage were virtually impossible to perform with the endovascular method. Only open surgery was effective, but it was too risky in patients with other serious diseases.

But the team led by Prof. Sławomir Nazarewski of the General Vascular and Transplantation Surgery Department of the Medical University of Warsaw has demonstrated that the Nellix stent graft can be repaired endovascularly.

Dr. Tomasz Jakimowicz made a successful endovascular "repair" of a stent graft in a patient who had a significant increase in abdominal aortic aneurysm after an earlier (4 years ago) endovascular treatment with the Nellix system in another centre. For surgery, a specially modified stent graft with branches for visceral vessels was used for this patient.

This surgery is the first successful procedure of Nellix stent graft repair using endoprosthesis with visceral artery branches in Europe and probably in the world, the university representatives inform.

The General Vascular and Transplantation Surgery Department is the largest centre in Poland and a leading centre in Europe and in the world dealing with the treatment of aortic diseases including thoraco-abdominal aneurysms (since 2010, over 500 endovascular treatments of thoraco-abdominal aneurysms have been performed, which is nearly half of this type procedures performed in Poland).

It is also the only centre in Poland and one of a dozen or so centres in the world that have access to endovascular technology developed for the treatment of aortic arch aneurysms (stent grafts with branches to the brachiocephalic trunk and carotid artery). The clinic cooperates closely on the development of new methods of endovascular treatment of aortic diseases with the most important centres in the world - Universitäres Herzzentrum in Hamburg (Prof. Tilo Kölbel), Chirurgie Vasculaire - Center de l`Aorte Université in Paris (Prof. Stephan Haulon, President of the European Society for Vascular Surgery), Mayo Clinic (Prof. Gustavo Oderich) and Paracelsus Medical University in Nuremberg (Prof. Eric Verhoeven).