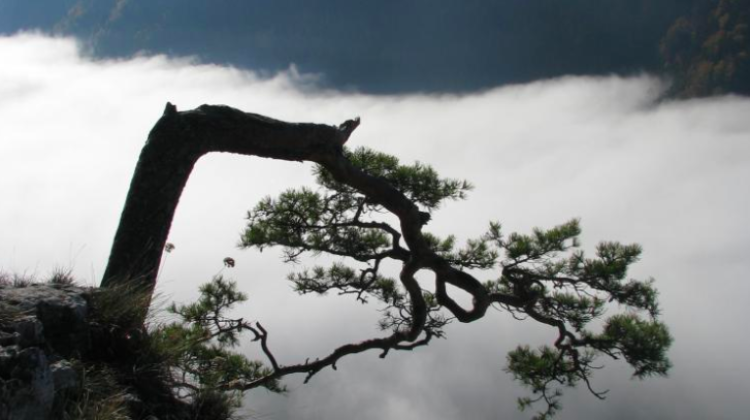 Scientists identified five species of fungi, 21 lichens, as well as slime moulds and bryophytes on a branch of relict pine from Sokolica, the symbol of Pieniny, broken off six months ago during a rescue operation. Dr. Jan Bodziarczyk from the University of Agriculture in Kraków told PAP about the detailed results of the studies of the branch.

Scientists studied a branch of relict pine from the Sokolica peak in the Pieniny National Park. It was broken in September 2018 by a helicopter during a rescue operation. When the helicopter flew over the peak of Sokolica to pick up a wounded tourist, it caused a strong blow, which broke the upper branch of the pine.

The surviving part of the pine, which still grows at the top of Sokolica, was treated with antifungal agents at the place of fracture. The tree - the symbol of the Pieniny - became the subject of scientific research. Samples were taken from the broken branch. Research is carried out by a team of 10 experts, including researchers from the Institute of Dendrology PAS in Kórnik, Silesian Botanical Garden of the Polish Academy of Sciences in Mikołów, A. Mickiewicz University in Poznań, Pedagogical University of Cracow and the University of Agriculture in Kraków with the support of the Pieniny National Park employees. Team leader, Jan Bodziarczyk from the Faculty of Forestry of the University of Agriculture in Kraków and member of the scientific board of the Pieniny National Park, summarized the results of the analyses in an interview with PAP.

Thanks to the cultures of biological samples collected from the broken branch, experts identified five species of fungi. "The branch was partly damaged by rot, and the most important cause of the cavity was a fungus called Cinereomyces lindbladii. This saprophytic fungus grows on dead trunks, in Poland only on pine and spruce, and causes white rot of wood. This rare species is found on the Red List of plants and fungi of Poland" - says Prof. Bodziarczyk, who leads the team studying the broken branch.

Researchers also identified a Umbellopsis isabellina taxon. Fungi of this genus are saprophytes that live in the soil, especially on rotting leaves. They are the first to inhabit decaying organic matter.

In addition, researchers also identified 21 species of lichens (including two rare species, subject to partial protection), one of them - tube lichen Hypogymnia tubulosa - is on the Red List of extinct and endangered lichens in Poland, with the NT (near threatened) status. Some lichens in the collected material are characterized by unusually shaped or deformed thalluses. Sterile species requiring the use of chromatographic techniques during identification are prevalent, which is why the list of lichen species is likely to grow after chromatographic studies.

In the group of organisms inhabiting the pine branch, researchers identified one slime mould: Licea variabilis, which had not been previously recorded in the Pieniny, but is common in Poland, as well as one moss, the broom forkmoss (Dicranum scoparium), which is subject to partial protection. All lichen species identified on the broken pine branch are quite common in the Pieniny; they are also found on other trees.

"For one branch measuring about 2.5 meters, 21 species of lichens are a good result, usually it is a few to a dozen or so" - emphasises Dr. Bodziarczyk.

Scientists were interested in the age of the broken branch, because while the pine from Sokolica is one of the oldest in Poland, its exact age is unknown. It is probably similar to the age of pines growing in its immediate vicinity, the oldest of which is over 550 years old. "The age of the broken branch is at least 160 years, but it must be assumed that it is older still, because the rings were analysed based on a disc cut from the middle part of the broken branch, which was devoid of wood damage and provided a reliable result. How old is the broken branch? This will be determined by means of an analysis of the drill core sample collected closer to the point of fracture, carried out jointly with researchers from Mikołów" - says the scientist researcher from the University of Agriculture in Kraków.

He adds that in 1995, scientists studied the age of three relict pines forming a small group growing a dozen meters below the pine damaged during the rescue operation. After drilling, the age of the oldest one was then determined to be at least 512 years - which means that today it is at least 536 years old (scientists assume that it can be up to 573 years taking into account additional rings that could not be counted on the part of wood damaged by rot). But the main pine tree on Sokolica was never drilled. It is too valuable as the symbol of the mountains.

According to Dr. Bodziarczyk, in the case of old trees, their age is often estimated, because after drilling the tree, it often turns out that part of the trunk is rotten and it is impossible to count the rings and reliably determine the real age. From a scientific point of view, such data prevent reliable analysis.

When it comes to climate and soil availability, the pine on Sokolica grows in extremely difficult conditions. The diameter of its trunk is just over a dozen centimetres. "A pine of the same thickness, growing 50-100 meters below, can be ten times younger, because it has deeper, more fertile and humus soil, generally better conditions of growth" - says the scientist.

As a result of such a slow growth, the annual increments and growth rings visible on the tree cross section are very narrow, and the wood itself is extremely dense. The few centimetres thick wood disc for physical and mechanical analysis, which was dipped in distilled water in mid-October, took more than two months to absorb water and sink!

After collecting samples for laboratory tests, the broken branch was preserved and protected with insecticide and fungicide. After the tests are completed, it will be added to the Pieniny National Park museum collection, where it will be displayed together with the research results obtained during detailed analyses.

Relict pines are very rare. They also grow below the peak of Sokolica, and the age of the oldest pine exceeds 550 years. The phenomenon of these trees is that their annual increments are very small, and their branches twist in a characteristic way, creating a very interesting crown architecture.